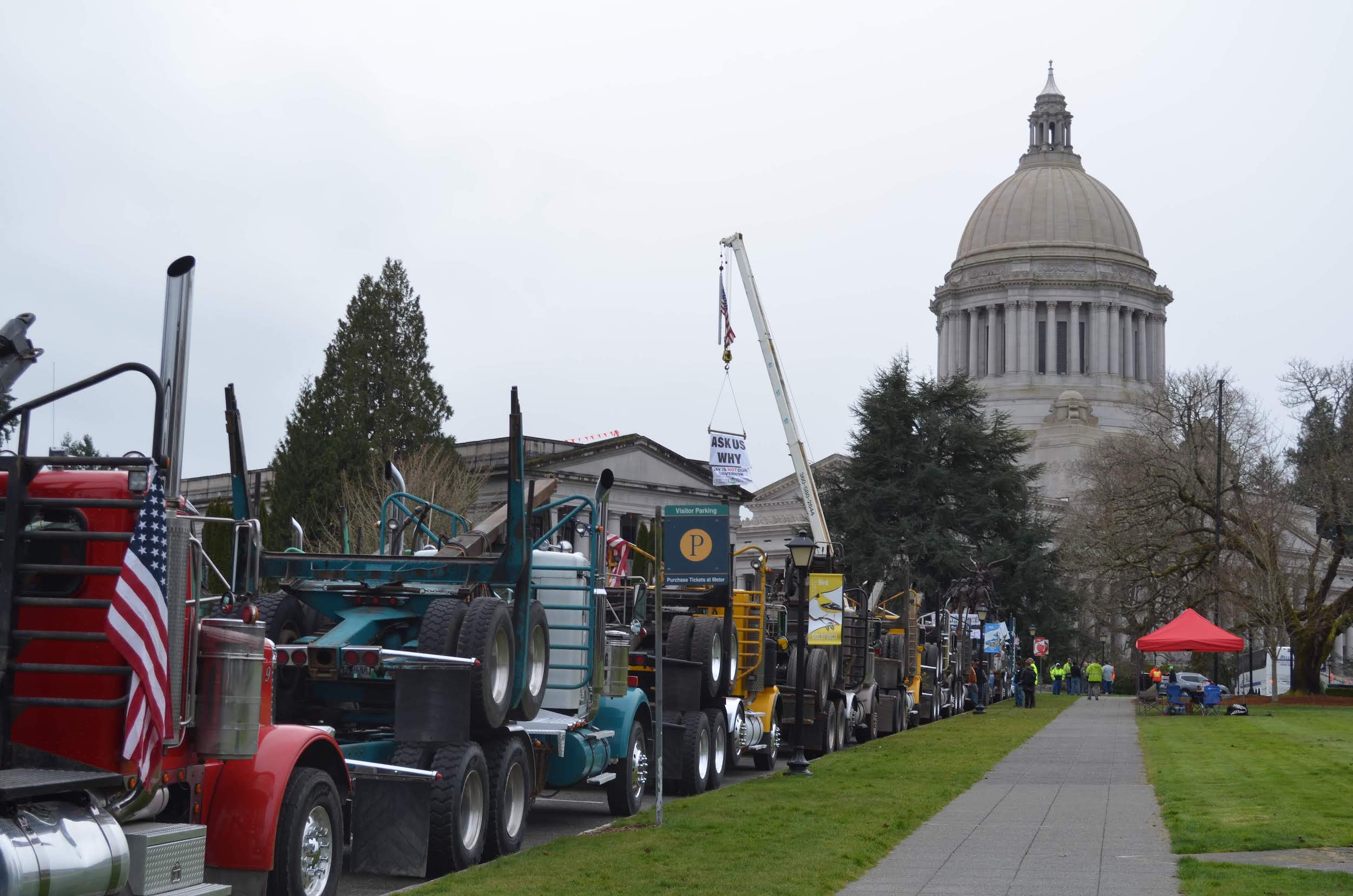 OLYMPIA – Washingtonians in the market for a new car could find more electric-powered vehicles in dealer showrooms in the next two years, the result of a bill that has passed the Legislature. 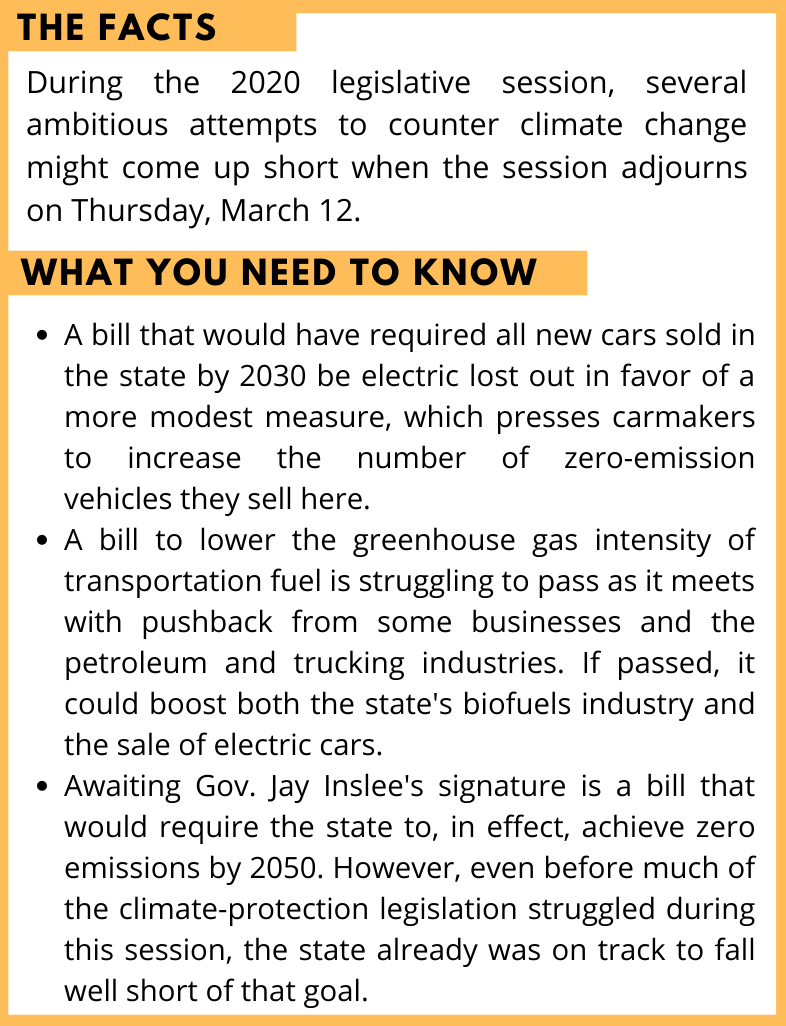 It’s not the big win that electric car proponents had hoped for – they’d still like to require that all new cars sold in the state by 2030 be electric.

One measure pursued ardently by environmentalists and their allies in the Legislature would mandate more climate-friendly fuels for vehicles that produce two-fifths of Washington’s greenhouse gases. Another would allow the state to require big climate-pollution sources such as petroleum refineries to rein in climate-altering emissions.

For fans of the electric vehicle like Seattle lawyer Matthew Metz, who heads the nonprofit Coltura, Friday’s passage of SB 5811 marks a modest step forward. It allows Washington to join 11 other states, including California, in pressing carmakers to increase the number of zero-emission vehicles (ZEVs) the companies sell here. ZEVs include electric cars, plug-in hybrids and hydrogen fuel cell vehicles.

Until recently, environmental organizations weren’t very interested, Metz said. “Last year, we really expanded the coalition a lot. It got bumped way up on the priority list, and now it’s primed for passage.”

The bill, which Gov. Jay Inslee is expected to sign, clears the way for Washington to join the California ZEV Program in 2022, when about 5% of vehicles sold by each individual automaker must be zero emission vehicles. By 2025, that number jumps to about 8%. If automakers fail to comply, they’ll have to pay penalties. 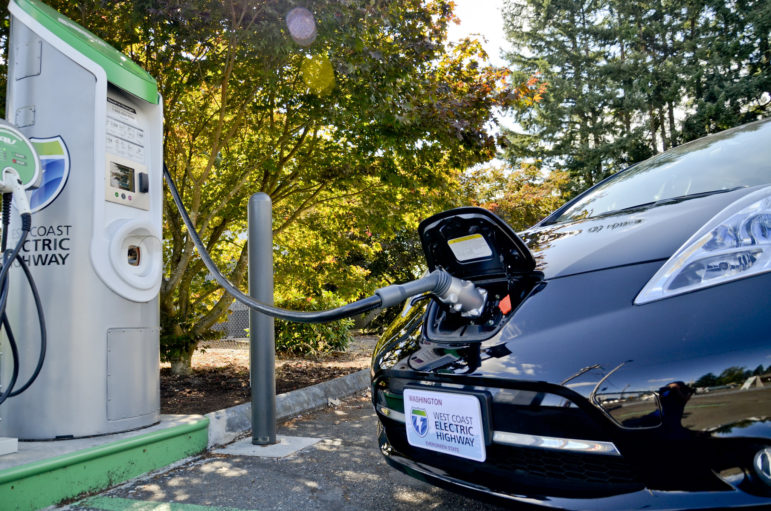 Legislation in Olympia could see electric vehicle charging stations get more use by pressing carmakers to increase the number of zero-emission vehicles sold in the state.

Not all the legislation to fight climate change is sailing through, though.

Less likely to pass – unless an 11th-hour compromise can be reached – is a low-carbon fuels standard, E2SHB 1110, which for the second year in a row has failed to clear the Senate Transportation Committee and appeared as of last week to be dead.

The practical outcome of that policy, if it were to pass: It would likely accelerate the electric-vehicle market in Washington, as it has in California, by giving car buyers rebates for purchasing an electric car. And it would also boost the state’s nascent biofuels industry. But it would raise the price of gasoline and diesel fuel by an unknown amount.

“The clean fuels standard is one of the most important policies for making sure the transportation sector is on the path to decarbonization.” ~Kelly Hall, senior policy manager with Climate Solutions

Environmentalists say the low-carbon fuels standard is one of the most important bills in their climate-protection arsenal because transportation fuels are the largest contributor to greenhouse gas emissions in Washington, responsible for more than 40% of emissions here. They say they’ll press until the end of the session on Thursday for its passage, and if a compromise fails this year, they’ll be back with the same bill next year. It faces stiff opposition from businesses and the petroleum and trucking industries.

“The clean fuels standard is one of the most important policies for making sure the transportation sector is on the path to decarbonization,” said Kelly Hall, senior policy manager with Climate Solutions, a Northwest-based clean energy economy nonprofit.

It’s not the only bill that could accomplish that goal. Environmentalists are working to pass a law that would authorize the Department of Ecology to regulate emissions on oil refineries, utilities, big factories and other major sources of greenhouse gases. That bill, HB 2957, would address a January ruling by the state Supreme Court which invalidated key portions of the rule imposed by the state Ecology Department to enforce the state Clean Air Act on the large greenhouse gas sources.

With time running out, the green lobby and its allies in the Legislature continue to push the measures to allow the state to crack down on businesses that emit greenhouse gases and to reduce the state’s transportation-related emissions.

“Our position is, we have to do one or the other,” said state Rep. Joe Fitzgibbon, a Democrat from Burien, who chairs the House Environment Committee, the sponsor of the clean-fuels bill.

A significant win for environmentalists this year: A bill to set new, more ambitious emission targets for the state, which has cleared the House and Senate and awaits the governor’s signature. That bill, HB 2311, would require the state to, in effect, achieve net zero emissions by 2050. 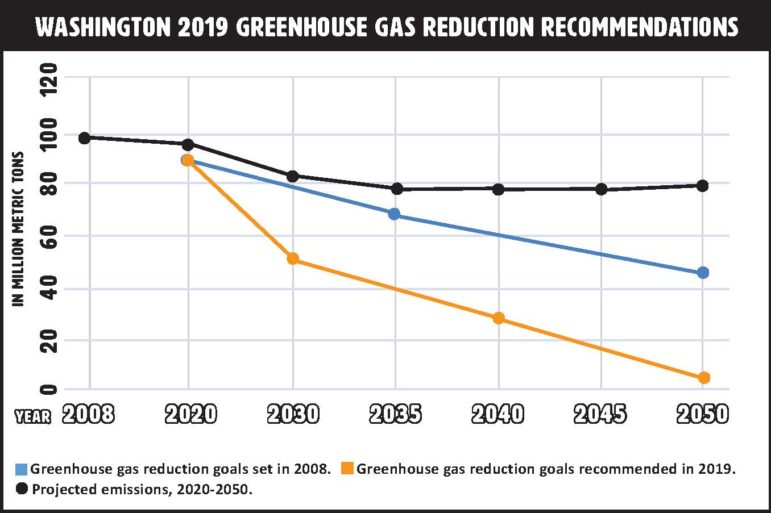 This chart shows the Washington Department of Ecology’s greenhouse gas reduction recommendations, which are encompassed in HB 2311, compared with the state’s 2008 emission targets, as well as a projection showing emissions if no further efforts to reduce greenhouse gases are made.

That’s a lot more ambitious than the current goal, set 12 years ago, to reduce human-caused emissions of greenhouse gases 50% below 1990 levels by mid-century. The state is on track to fall well short of that goal.

The legislation “really sets a road map for the state,” environmentalist Hall said. “It helps us then craft the policies that will most help us reach those goals.”

Yet, “It doesn’t represent the huge climate progress we need,” Brittany Gallagher of The Nature Conservancy acknowledged in an email.

Truckers show up in force against clean fuels bill

Last week, truckers and loggers who opposed the clean fuels standard flexed their muscle, parking dozens of flag-flying logging trucks in front of the Capitol. The protest, organized by the group Timber Unity, hoisted a banner from a crane that read, “Truckers oppose HB 1110,” and “Jay is not our governor.” Timber Unity has also been active in Oregon, where it’s helped block cap-and-trade legislation.

If diesel prices go up, “it’s going to bury us, it’s going to take food off our table.” ~Brandon Miller of Forks, Wash., who runs log processing equipment

More than 100 people signed up to testify, filling a Senate hearing room and two overflow rooms in the Cherberg Building; when those rooms were filled to capacity, the Capitol’s Senate Gallery was pressed into use, and a broadcast of the hearing was projected on the curved upper wall of the Senate chamber.

Dressed in their work clothes – plaid shirts, hoodies, caps, work-worn jeans – truckers told lawmakers they were already struggling with the narrow profit margins that define the economics of their industry. An increase of any kind would be difficult to absorb, they said.

If diesel prices go up, “it’s going to bury us, it’s going to take food off our table,” said Brandon Miller of Forks after the hearing. Miller, who runs log processing equipment, said many trucking firms have already been required to buy new trucks under federal regulations, at a cost of hundreds of thousands of dollars per truck. And even if truckers can pass higher fuel costs onto their customers, “anything transported by a big rig is going to cost more money.”

The Washington Construction Industry Council argued that it amounted to a virtual gas tax, and the Association of Washington Business said since the new rule was implemented in California, there has only been a slight decrease in greenhouse-gas emissions. A Western States Petroleum Association lobbyist told the committee that it was “misleading and irresponsible” to suggest that the impact on gas prices would be minimal.

But BP, the state’s largest petroleum refiner, has remained neutral even as it dropped out of the powerful Western States oil and gas lobbying group in late February because it disagreed with the association’s position on carbon pricing and its opposition to the low-carbon fuel standard. At its Cherry Point refinery, BP has been blending small amounts of animal tallow into its diesel fuel since 2018, making biofuel.

Supporters say that in California, where the clean fuels standard has been in effect for 10 years, fuel prices have actually dropped compared to the national average – likely a function of the fluctuating market price of gas and diesel, rather than in response to the carbon standard. And a homegrown biofuels industry could help stabilize fuel prices, they argue. 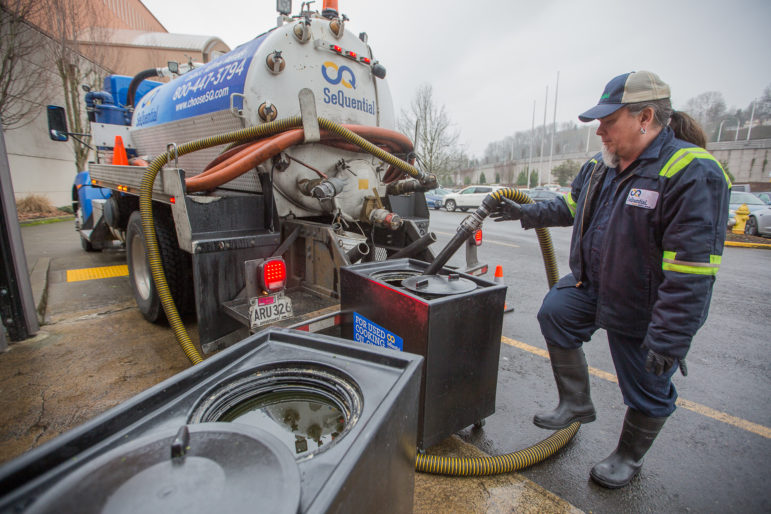 SeQuential collection driver and driver supervisor Chad Peters vacuums used cooking oil into his truck outside Din Tai Fung in Tukwila. The cooking oil he is collecting into his 1,500-gallon vacuum truck will taste a second life as biodiesel, one of the “good” biofuels that E2SHB 1110 encourages.

The bill would require companies that produce transportation fuels consumed in Washington to reduce the greenhouse-gas intensity of their fuels gradually, reaching a 20 percent reduction by 2035. In California, the California Air Resources Board estimates the fuel standard raises the price of gallon of gas by 9 to 23 cents under a 10 percent carbon reduction, and by 18 to 46 cents under a 20 percent reduction. Senate staffers said that was their best guess as to what it might do to prices in Washington, too.

If the bill were to pass, oil companies would have three ways to reduce the greenhouse-gas intensity of fuels: they could make efficiency improvements at refineries, blend a cleaner-burning biofuel product into their fuel, or purchase credits from another producer of clean fuel, such as a utility that generates electricity from hydropower.

It’s that last option, purchasing credits from electric utilities, that has been put to use most often in California, and has led to consumer rebates for purchasing electric cars, said Adam Maxwell, head of government relations for the environmental group Audubon Washington.

The low-carbon fuels standard has also won support from an unexpected source: the Alliance for Automotive Innovation, an association of the world’s largest automakers, including Toyota, Volkswagen, Hyundai, GM and Ford.

“Washington State has already done some good things,” said Wade Newton, spokesperson for the alliance, in an email. “And that’s an important start to enticing customers to embrace even cleaner, safer and smarter vehicles.  But there’s still more for the policymakers to do to achieve the state’s priorities.”

Automakers are pouring billions into developing the next generation of electric vehicles, and they want to make sure there’s a market for them, said Metz, of Coltura. But they don’t support the ZEV bill because it is a mandate, rather than a consumer incentive to buy an electric car.