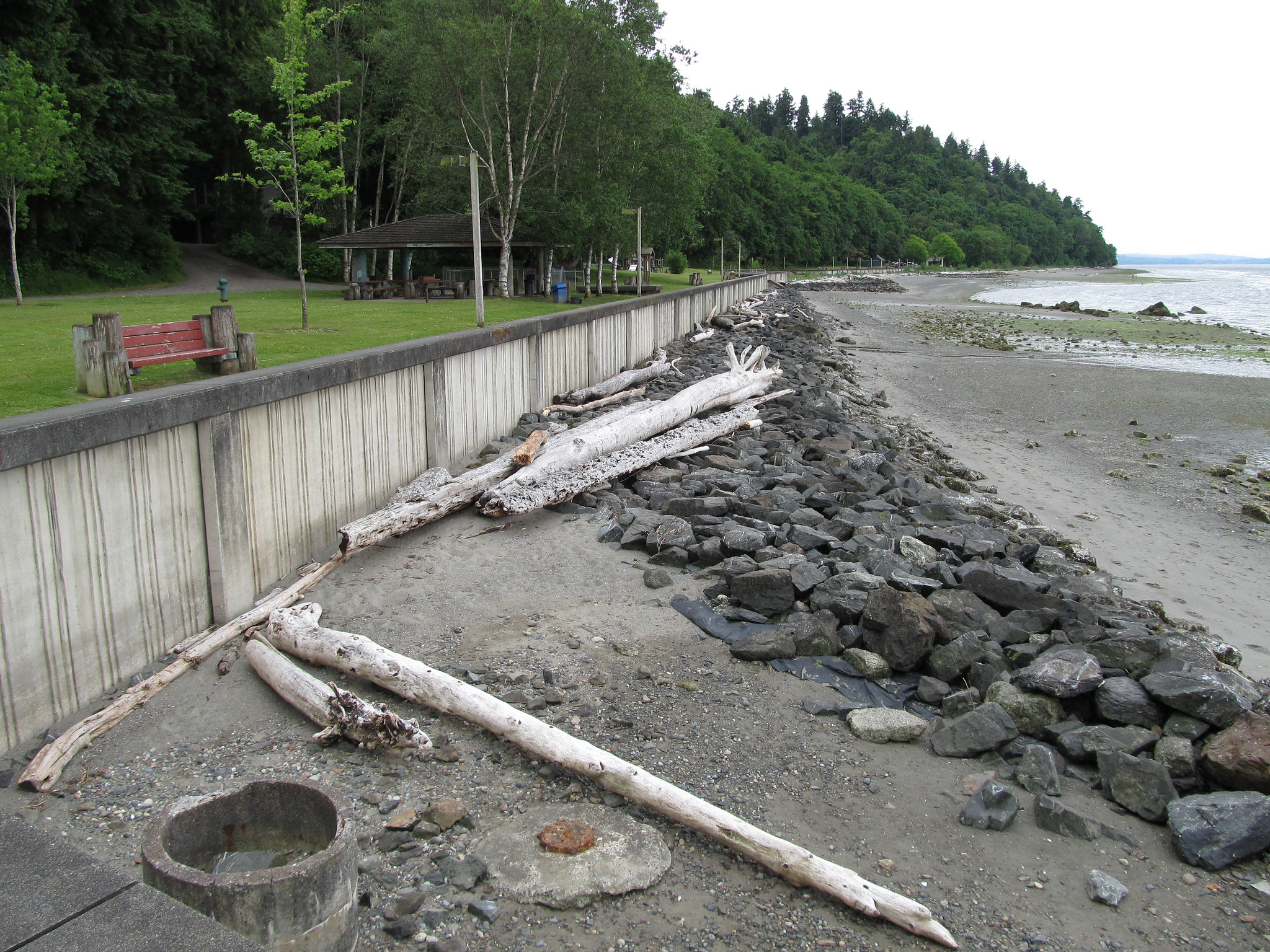 Senator: To help orcas and salmon, seawalls should be a last resort

Home » Environment » Senator: To help orcas and salmon, seawalls should be a last resort

OLYMPIA – One year after Washington state lawmakers stiffened restrictions on shoreline “armor” that drew bitter opposition from the building industry, Democrats have put forward what amounts to a soft sell for softer shores on Puget Sound.

“In our attempt to gain habitat, this could be a bigger win than anything we’ve done already with no pain, or very little pain, and no impingement on property rights.” ~ Sen. Jesse Salomon

Legislation introduced last week would require Sound-side homeowners to consider fish-friendly fixes before rebuilding aging concrete seawalls to protect their land from erosion. While no new penalties or standards would be created by the bill, the proposal has been described as overly restrictive by industry groups already fighting other regulations aimed at seaside property owners.

Shoreside concrete walls — “bulkheads” to defenders, “hard armor” to detractors — stifle the flow of sand and gravel from the seaside onto beaches that nourish tiny fish that are a key part of the food chain. Without that supply of new sand flowing downhill to the shore, the beach beyond a wall grows steadily steeper, shrinking the sandy, cobbled tideland that supports nesting by small fish that feed juvenile Chinook salmon. Chinook are the main prey of the endangered orcas that frequent Puget Sound.

Intact beaches without seawalls are crucial to the small “forage fish” that are “a foundational link in the Puget Sound food web,” said Jeff Parsons, the lobbyist for the Puget Sound Partnership, the state’s umbrella agency coordinating recovery work in the estuary, in testimony to legislators last week.

But that link is broken on 29 percent of Puget Sound’s 2,500-mile shoreline.

Efforts to free the shores have managed to hold the line steady over the past decade, according to statistics collected by Puget Sound Partnership. From 2011 to 2016, about 3 miles of armor was removed, while 3.8 miles of new shoreline was armored; during the same period, about 12 miles of existing armor was replaced. 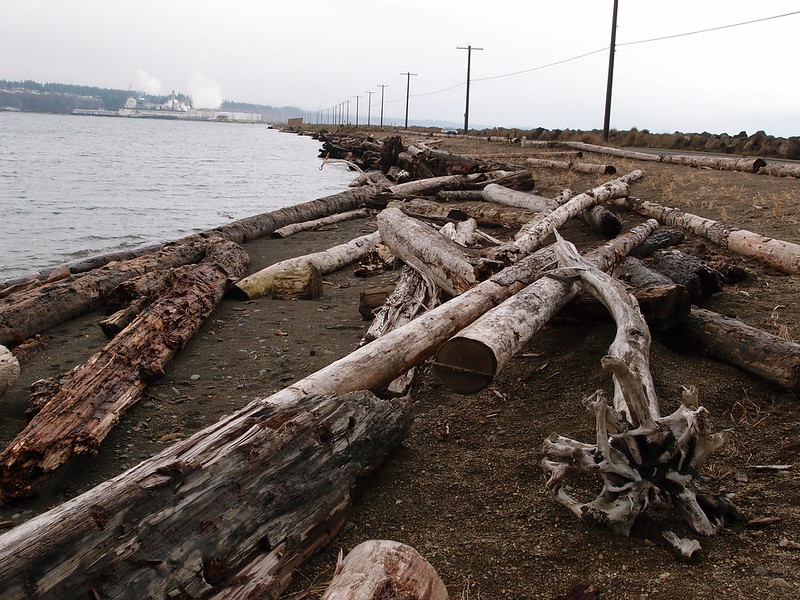 Using natural materials and specific designs, shoreline armoring like this at Ediz Hook in Clallam County allows the flow of sand to the beach to continue, while buffering against high waves that cause a lot of erosion.

The aim of the legislation filed by Shoreline Democrat Jesse Salomon, Senate Bill 6147, is to enable residential property owners who are replacing old seawalls to choose a more environmentally sensitive alternative, he said.

“In our attempt to gain habitat, this could be a bigger win than anything we’ve done already with no pain, or very little pain, and no impingement on property rights,” Salomon said last week during an initial hearing on the bill before the Senate Agriculture, Water, Natural Resources & Parks Committee.

The legislation would require the state Department of Fish & Wildlife to consider whether soft solutions — beach, wood or rocks — could prevent erosion before allowing old bulkheads, usually made of concrete, to be replaced.

Existing law requires Fish & Wildlife to ensure projects provide “proper protection for fish life” but prohibits the department from using its authority to require ecological improvements “out of proportion to the impact of the proposed project.”

“The legislation as proposed could require a homeowner to select the least impactful method, regardless of cost and regardless of the financial situation a homeowner could face.” ~Jennifer Spall, a spokesperson for the Building Industry Association of Washington

Salomon’s legislation would require builders replacing existing shoreline armor to consider the “least impactful alternative” with an eye toward fish preservation. Ideally, builders would remove hard armor and restore the beach. If that’s impractical, they must consider softer, natural materials or plants, or look to place the concrete wall farther back from the high water line. Only when those approaches prove unfeasible would a builder replace old hard armor with new.

Salomon describes it as a “win-win.” It is designed to be toothless; Salomon said the thought is that homeowners, given the information, will choose a greener, equally effective solution.

The building industry and others aren’t convinced. They assert the legislation would tie property owners’ hands and threaten their lands and homes.

“The legislation as proposed could require a homeowner to select the least impactful method, regardless of cost and regardless of the financial situation a homeowner could face,” said Jennifer Spall, a spokesperson for the Building Industry Association of Washington.

Friction over Salomon’s bill stems in part from a suite of regulatory changes enacted in 2019 that stiffened penalties for unsanctioned shoreline armor. The legislation also established for the first time that residential property owners aren’t automatically eligible for the state’s permission to build a bulkhead or seawall. Then as now, the legislation aimed to drive property owners toward erosion fixes less detrimental to marine life.

Lobbyist Bruce Wishart of Sound Action, a watchdog organization that advocates for restrictions on building on Puget Sound’s shores, described hard armoring as “the most destructive type of project to nearshore habitat in Puget Sound.” It is also frequently unnecessary; shoreline erosion, Wishart said, is often caused by runoff or can be managed without concrete walls.

“Many shoreline owners are under the belief that they need a bulkhead to protect their shoreline,” Wishart said. “The fact of the matter is that in many cases their home would be better protected if they used less expensive techniques such as soft armoring.”

Randi Thurston, protection division manager for the state Department of Fish & Wildlife’s habitat program, said a recent Fish & Wildlife study found that about half of armor replacement projects authorized by the department were either unnecessary or overly hard. The process Salomon’s bill would change, Thurston said, favors “replacing structures with like structures.”

Fish have flourished in areas where armor has been removed. Habitat enhancements on Elliott Bay at Seattle’s Olympic Sculpture Park drew larval fish and juvenile salmon to the reconstituted pocket beach. After a seawall was removed at Seahurst Park in Burien, little fish returned to the beach for the first time in 11 years.

Among environmental scientists, those fish are dubbed “forage fish.” The foragers dining on them are often Chinook salmon. 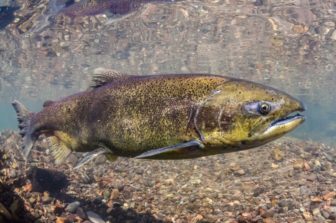 Forage fish and Chinook were front-of-mind for Salomon in crafting the bill. Asked what motivated the legislation, Salomon, standing in the hearing room where he’d just pitched his bill to colleagues, pulled out his iPhone and began scrolling through fishing photos.

One showed Salomon squatting on the bank of the Chehalis River, a half-dozen freshly caught salmon arrayed in front of him; in another, the public defender lofted a Chinook he caught in Puget Sound.

“I think this [legislation] is a very easy win that doesn’t interfere with property rights, doesn’t stop erosion prevention on private property,” said Salomon, quick to note that his commitment to environmental causes runs deeper than the thrill of fishing. He has a tattoo of the earth and stars on his left shoulder, ink he credits with securing him the Sierra Club’s endorsement.

“We’re all on the same page — we all want to preserve salmon habitat. We just want to make sure we’re all playing by the same playbook.” ~Jay Roberts, a Whidbey Island general contractor

In 2019, the Legislature stiffened enforcement of restrictions on shoreline armoring and created a more stringent permitting process, wrapping a suite of new restrictions opposed by homebuilders into an orca recovery bill. Fish & Wildlife is currently working to implement those restrictions in the face of opposition from building interests.

On Friday, a state oversight commission held a public hearing on the Department of Fish & Wildlife’s proposed rules that would put that law into effect. The scope and size of any fines for violations have yet to be firmly set; while environmental organizations celebrated the strengthened regulations, homebuilders describe them as overly vague.

The department’s proposed rules change a $100-a-day maximum fine for each violation of state law in building a seawall or other shoreside armoring to a $10,000 maximum fine per violation. Critics say the current rules allow builders to violate the law with little financial impact.

“We’re all on the same page — we all want to preserve salmon habitat,” Jay Roberts, a Whidbey Island general contractor, told the state Fish & Wildlife Commission on Friday. “We just want to make sure we’re all playing by the same playbook.”

Residential properties represent about 60 percent of the armored shoreline along Puget Sound, and state environmental officials believe they represent the best opportunity to quickly soften the Sound’s shores and jumpstart populations of forage fish. The removal of armor protecting roads, railways and industrial sites poses a more time-consuming problem. 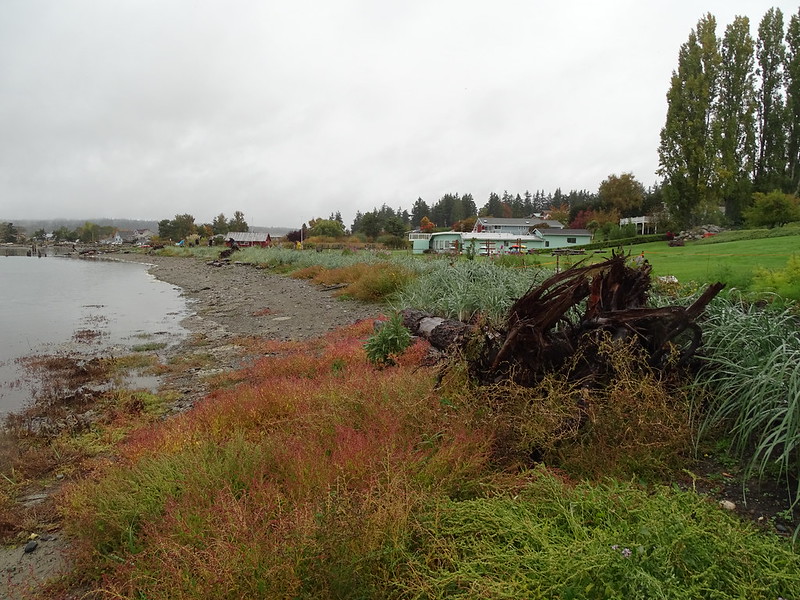 Creosote-treated wood piles, angular rock armor and rubble were removed from this private shoreline on west Whidbey Island and replaced with softer alternatives such as native plants and large pieces of wood.

“Soft armoring for waterfront property … can and should be utilized when and where it makes fish and money sense,” Spall said. “However, we’d prefer to see incentivizing this type of shoreline protection, instead of a bill full of undefined terms that will ultimately lead to cost-prohibitive requirements.”

At last week’s legislative hearing, the Northwest Seaport Alliance, which includes the Tacoma and Seattle cargo ports, expressed concern that the legislation might hamper  its efforts to shore up terminals that cannot be protected without concrete. A state Department of Transportation representative voiced a similar worry that efforts to protect shoreside roads could be complicated. While aimed at saltwater shorelines, the bill as written would apply to those on rivers and lakes as well.

Supporters of the bill contend the legislation doesn’t require anything of property owners except that they consider softer solutions before replacing riprap or buttresses that may not be necessary.

“That,” Wishart said, “is probably a good thing for both the homeowners and the environment.”

The Senate Agriculture, Water, Natural Resources & Parks Committee, on which Salomon sits, is expected to take up the bill Thursday in executive session. It’s not clear whether the bill would see a floor vote during the current legislative session, which concludes no later than March 12.

This story has been altered. It initially on second reference mis-identified Jennifer Spall, the spokesperson for the Building Industry Association of Washington, as a lobbyist. It’s also been changed to clarify that Jeff Parsons of the Puget Sound Partnership called forage fish, rather than the beaches where they spawn, “a foundational link in the Puget Sound food web.”

InvestigateWest’s coverage of environmental issues in the 2020 Legislature will continue. Sign up to receive alerts about future InvestigateWest stories at http://www.invw.org/newsletters/.