What is the future of local news in Tacoma?

Home » Newsroom » What is the future of local news in Tacoma?

InvestigateWest Executive Director Robert McClure recently spoke as part of a panel on “The Future of Our Local Press” at the University of Puget Sound, sponsored by the City Club of Tacoma and the League of Women Voters of Tacoma-Pierce County. Read on to find out how InvestigateWest is contributing to the future of local news reporting, and how you can, too. 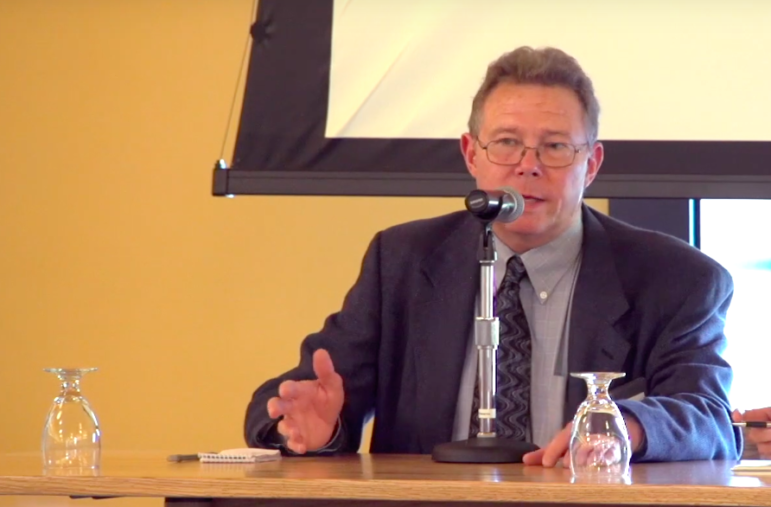 Executive Director Robert McClure speaks on a panel on “The Future of Our Local Press.”

Access to information is more important than ever, and while people rely on news sources like newspapers, radio and television, they don’t always recognize the value of local press. Few realize that the newspaper industry, the nucleus of the nation’s news-gathering infrastructure, has been hit hard financially.

“According to the Pew Research Center, three-fourths of people believe that local news outlets are in good financial shape,” explained panel moderator Joanne Lisosky, a communications professor at Pacific Lutheran University. “This one really breaks my heart: fewer than one in six people pays for local news.” 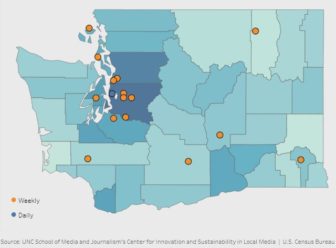 Where newspapers have closed or merged in Washington state since 2004.

As many content publishers have gone digital, they’ve lost their largest traditional revenue source: advertisements in the print newspaper. Many are raising the price of subscriptions or locking content behind paywalls. Unfortunately, this is a price that not everyone wants to pay, but with nearly 1,800 U.S. newspapers closing since 2004, too many aren’t getting the news they need.

“We as citizens need to do something so that we can ensure we’re getting straightforward, in-depth reporting,” said InvestigateWest Executive Director Robert McClure. At InvestigateWest, “we do a lot of the in-depth stuff that’s falling by the wayside in too many newsrooms nowadays.”

With so much happening in the world, it’s easy to forget about what’s going on in neighborhoods and communities throughout the Pacific Northwest, but local news can have a big impact.

McClure pointed to InvestigateWest’s reporting on the Washington foster care system, which helped prompt the Washington Legislature to pass six new laws and $48 million in funding, creating a new state Department of Children, Youth and Families.

But such important reporting comes with a hefty price tag — almost $51,000. InvestigateWest relies on donations and grants to continue its mission of watchdog journalism.

While there are journalists who are passionate about covering the issues, the future of the local press is in the hands of the public.

“The thing I’ve advocated for is a news organization that is community-based, community-focused and community-funded,” emphasized McClure. “That’s going to be somebody who cares about this place.”

The panel also included Dale Phelps, editor and vice president of news at The News Tribune; Matt Martinez, content director at KNKX; and Lisa Patterson, editor at South Sound and 425 Magazine. Phelps said his newsroom numbered more than 130 people when he started in 1998. Today, it’s down to about 25.

To learn more about how some local news outlets are staying solvent in the digital age, and how you can help, check out the panel discussion on “The Future of Our Local Press” on YouTube.