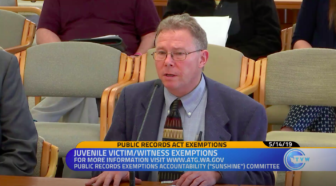 OLYMPIA — InvestigateWest Executive Director Robert McClure this week advised state officials to be cautious about recommending that the Legislature pass additional restrictions on the public’s access to state government information on juveniles.

McClure addressed the Sunshine Committee, a council appointed to advise the Washington Legislature on open-government issues. The group is responsible for recommending whether to repeal or amend exemptions to the Public Records Act, which governs what information members of the public can compel the state to release about a wide range of issues.

McClure urged the committee to exercise caution before recommending that the Legislature pass additional restrictions on the public’s access to state government information on juveniles.

“It’s very difficult to try (to) hold the state’s feet to the fire with all the exemptions in there for juveniles, and that’s our job,” said McClure, noting that InvestigateWest resorted to suing the state and winning landmark access to foster care records regarding how well the state prepared young people exiting the foster care system when they turn 18.

Later,  an InvestigateWest series of stories documented a foster care system in meltdown: mistreated foster parents, severely overburdened caseworkers and foster children moved around repeatedly from one foster home to another because of a severe lack of foster parents. In some cases kids ended up sleeping in motels or even in state workers’ offices. The series led to six new laws to reform the foster care system.  Yet, McClure said, “the heart of the information was how the kids were being moved around, and we were not allowed to see that” under existing public records laws.

After McClure’s testimony, the committee chose not to go forward immediately with several proposals to reform statutes governing disclosure of state-held information about young people in the criminal justice, foster care and other systems operated by the state. The committee chair, retired Yakima County Superior Court Judge Michael Schwab, joined other committee members in calling for representatives of the news media who cover youth affairs to appear at the committee’s next meeting in Olympia on Aug. 20.

To learn more about the issue, go to TVW’s coverage of the hearing. McClure’s comments start at 1:09:22 and 2:01:27. See InvestigateWest’s ongoing foster care coverage here.