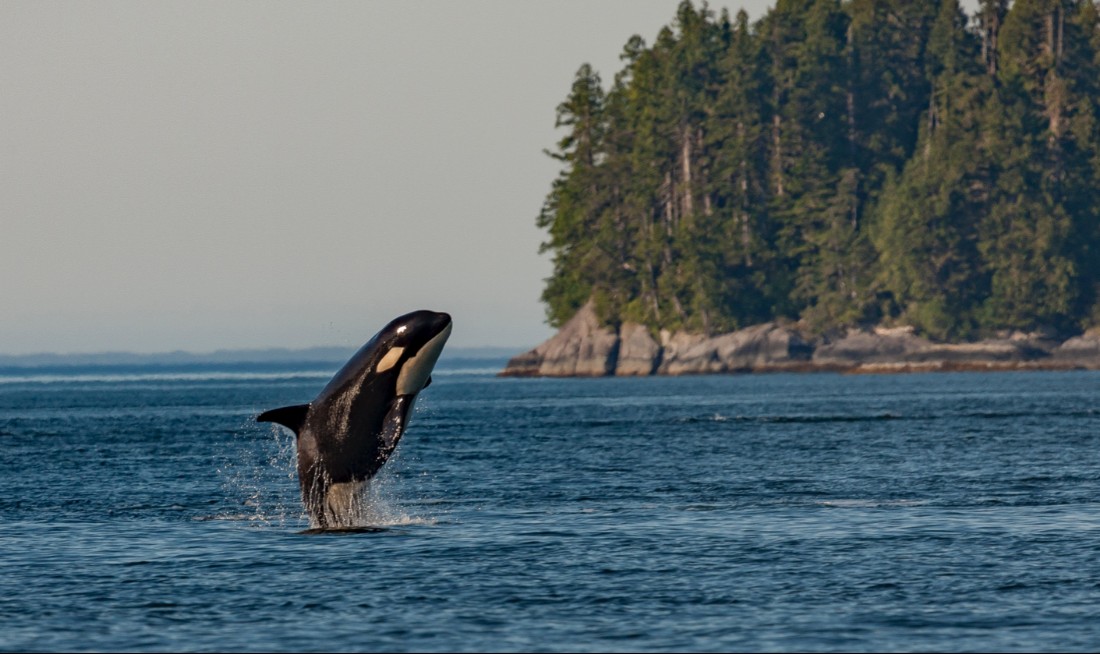 Washington legislators came into their 2019 session brimming with proposals to help rescue Puget Sound’s imperiled orcas. But now they have dropped one of the most important – and controversial – ideas: A three-year moratorium on commercial whale watching.

Lawmakers denied Gov. Jay Inslee’s attempt to force commercial whale-watching boats to keep extra distance from three groups of orcas that summer in the waters of Puget Sound and the Salish Sea between Washington and Canada.

In doing so, they turned down a key recommendation from an overwhelming majority of a group of nearly 50 researchers, state and tribal officials and others who served on the Southern Resident Orca Task Force.

“The task force really felt it was critical,” said Stephanie Solien, Orca Task Force co-chair. Solien is also a civic activist and vice chair of the leadership council of the Puget Sound Partnership, a state agency.

“We felt that a temporary moratorium … would give them kind of a break, from just the constant noise and interference that science shows they experience when they are surrounded by whale-watching boats,” Solien said in an interview with InvestigateWest. 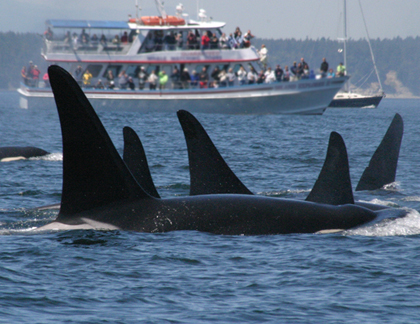 Bills filed early in the legislative session would have prohibited commercial whale watchers from approaching a southern resident orca within 650 yards until 2023. Currently whale-watching boats and other vessels must stay 200 yards away from the orcas. (Credit: NOAA Fisheries/National Marine Fisheries Service)

Scientists who study the orcas, or killer whales, say the noise of boat motors interferes with the whales’ ability to find prey through echolocation. This biological sonar allows orcas to create a sonic map of their surroundings when they emit a series of clicks by moving air between nasal sacs near the blowhole. They then listen for their return after hitting an object such as a fish, something like a human listening for an echo.

Bills filed early in the legislative session would have prohibited commercial whale watchers from approaching a southern resident orca within 650 yards until 2023, which some whale-watching industry supporters called a de facto orca-watching ban. Currently whale-watching boats and other vessels must stay 200 yards away from the orcas.

In substitute bills in both chambers, the bills’ sponsors struck the moratorium.

“I didn’t think that that was necessary,” Rep. Brian Blake, D-Aberdeen, the lead sponsor of the original bill in the House, HB1580.

Blake said public testimony in the House convinced him to remove the 650-yard limit from his bill, as did private discussions with whale conservationists and advocates for the whale-watching industry.  He also learned that the commercial orca watching fleet’s presence alerts the crews of other vessels that orcas are in the vicinity and the need to proceed through the water cautiously.

“We would lose that if we shut them down,” Blake said in an interview.

Shane Aggergaard, a whale-watching boat captain and business manager, made a similar argument to the Senate Agriculture, Water, Natural Resources and Parks Committee in a Feb. 12 hearing on the Senate version of the bill, SB5577.

“If you have a moratorium, there won’t be boats on scene to lead as an example,” Aggergaard told the committee.

“You take us away, we can’t possibly put enough enforcement out there to protect these animals,” he said.

“If you have a moratorium, there won’t be boats on scene to lead as an example… You take us away, we can’t possibly put enough enforcement out there to protect these animals.” — Shane Aggergaard, a whale-watching boat captain

“The whale-watching industry does care about these orca, and they are active on our task force,” Solien said. “But they disagreed with that [moratorium] approach, and they were able to get support in the Legislature to withdraw that suspension.”

Sen. Christine Rolfes, D-Bainbridge Island, the lead sponsor of the Senate bill, said she took out the 650-yard-limit from her bill because “we did not want to destroy the whale-watching industry.” She said the industry “builds public support for saving orca whales, and it’s … part of our region’s economy.”

“We also believe that if the whale-watching boats are behaving responsibly, [then] they set up the buffer and the other boats follow,” Rolfes said.

In addition, she said, “most of the science indicated that you could be closer if you were going slow,” as laid out in the bill.

The legislation enjoyed strong bipartisan support in both chambers of the Legislature, with the House bill passing, 78-20, and Senate version approved 46-3. Democratic House leaders plan to pass the Senate version and send it to Inslee.

House Republican Leader J. T. Wilcox, R-Yelm, voted for the House legislation. “I probably wouldn’t support a total ban [on orca-watching],” he said in an interview. “That’s why I supported the compromise.”

“To say that you can have a boat out there that’s fishing, or a ferry that’s transporting people, but you can’t have somebody operating a boat and adding to the economy, full of people that want to look through their binoculars at an orca, just seems silly,” he said. 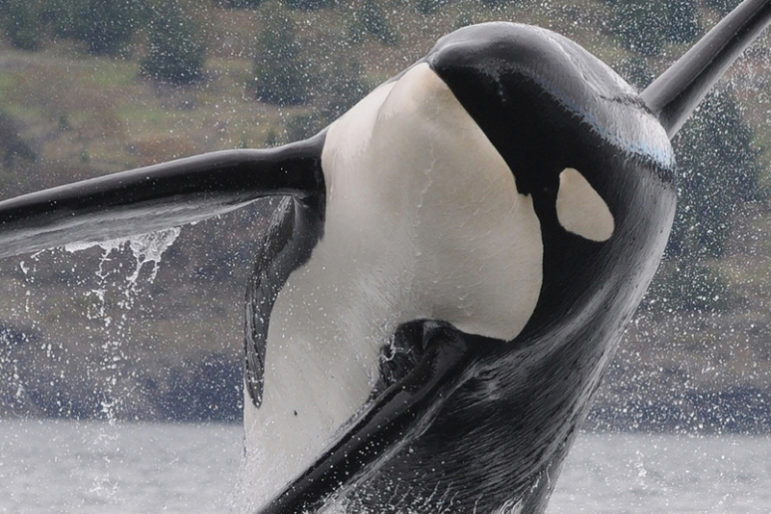 By contrast, Rep. Joe Fitzgibbon, D-Seattle, who is chair of the House Environment and Energy Committee, said he “very much would have supported a temporary suspension in order to just ensure that we were being as protective as possible” of the whales.

“It was clear to me that that did not have support to pass,” he said.

“I’m never interested in letting the perfect be the enemy of the good, knowing how incremental the legislative process can be.”

While there are scientists and environmental activists who see value in the orca-watching vessels, at least one backed the original version of the Senate and House bills with the moratorium. Todd Hass, the special projects liaison at the Puget Sound Partnership, said at the Feb. 12 Senate committee hearing that noise pollution is a serious problem.

“Why do we need to quiet the waters? Because orcas are highly auditory animals and take advantage of the typically great benefits of using sound-based signaling and hearing, rather than vision,” said Hass, who holds a Ph.D. in marine ecology and has studied acoustic communication.

The Orca Task Force and Inslee’s moratorium recommendation applied only to southern resident orcas; other species of whales including Bigg’s, or transient, orcas, were exempt. The transient orcas eat marine mammals such as seals. They also use echolocation to locate prey, but their populations – some  250 visited the Salish Sea in Washington and British Columbia last year – are much healthier than Puget Sound’s fish-eating orcas, whose historic population size is thought to have been about 200, but which now number only 75.

“Why do we need to quiet the waters? Because orcas are highly auditory animals and take advantage of the typically great benefits of using sound-based signaling and hearing, rather than vision.” — Todd Hass, Puget Sound Partnership

Inslee appointed the Orca Task Force, which began work last spring. Over the summer, the increasingly perilous plight of the orcas was thrust into the international spotlight when two orca calves died, and the mother of one carried around the carcass of its offspring for 17 days in what was widely interpreted as a sign of mourning.

Orcas are highly intelligent creatures, with a brain nearly four times the size of humans’, clearly defined dialects, and the ability to pass along complex knowledge from generation to generation.

Lawmakers in Olympia have retained many of the Orca Task Force-recommended measures to lessen noise for southern resident orcas. Provisions in the bill include forcing boats to observe a “go-slow” zone of half a nautical mile in any direction from a southern resident orca; forbidding people from positioning vessels fewer than 400 yards behind an orca; and prohibiting steering a vessel or other object within 300 yards of an orca.

Under current law, vessels are banned from approaching within 200 yards of an orca and from positioning a vessel in the path of an orca at any point within 400 yards.

The Senate bill is in the House Appropriations Committee and could receive a vote of approval from the committee today. It then would move to the Rules Committee, which will decide when to schedule it for a House floor vote that would send the legislation to Inslee. The governor is expected to sign it.

The legislation, most of which was requested by the governor’s office and all of which was lead-sponsored by Democratic senators and representatives, mostly hews closely to task force proposals.

Legislation on oil transportation that Democrats plan to send to Inslee, HB1578, is now in the Senate Ways and Means Committee.

Originally lead-sponsored by Rep. Debra Lekanoff, D-Bow, and passed by the House Environment and Energy Committee, the bill puts in place measures with the goal of minimizing oil contamination in the water should an oil-laden vessel have an accident and leak.

By forcing these smaller oil shipments to be escorted through the water by a tug boat, “if they are somehow disabled, they can be rescued,” said Fitzgibbon, co-sponsor of the bill.

The legislation stands a chance in the Senate, where Democrats hold a narrow majority, because it passed with bipartisan support in the House: It attracted the votes of all of the House Democrats and 13 of the 41 House Republicans, including House Republican Leader Wilcox.

“That one had been pretty carefully worked with … the industry, and we felt like the costs had been mitigated,” Wilcox said in an interview, adding that “there’s still a lot of concern” in the Republican caucus about the bill. 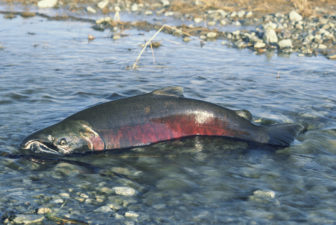 Scientists say the most important way to restore the fish-eating orcas of the Salish Sea is to bring back the once-abundant runs of nutritious Chinook salmon, the orcas’ main prey.

In the Senate, a bill giving the Department of Fish and Wildlife heftier enforcement power to protect salmon runs, HB1579, had been stuck in the Agriculture, Water, Natural Resources and Parks Committee, where chairman Kevin Van De Wege, D-Sequim, hedged on whether he would join the other three Democrats on the panel to pass the legislation out of committee. But members approved it last week and referred it to the Ways and Means Committee.

Meanwhile, a bill giving the Department of Ecology powers to create regulations on chemicals without legislative approval, SB5135, has passed out of the Environment and Energy committee in the House. Toxic chemicals that flow into Puget Sound and its tributaries are another major challenge to the orcas’ survival.

The bill squeaked by in a floor vote in the Senate, where it passed with just 25 yeas and 24 nays, including from four Democrats, among them Sen. Tim Sheldon, D-Potlatch, who caucuses with Republican senators.

Wilcox suggested that the bill may receive a chilly reception among House Republicans.

“We have generally been against giving the Department of Ecology the authority to specifically ban things,” he said.

“We’ve supported bans that went through the Legislature, and we would do that in the future, but [we] are not usually supportive of just delegating that power,” Wilcox added.

When asked if he himself would vote for the bill, he replied, “Probably not.”

Sign up to receive alerts about future stories at https://www.invw.org/newsletters/.