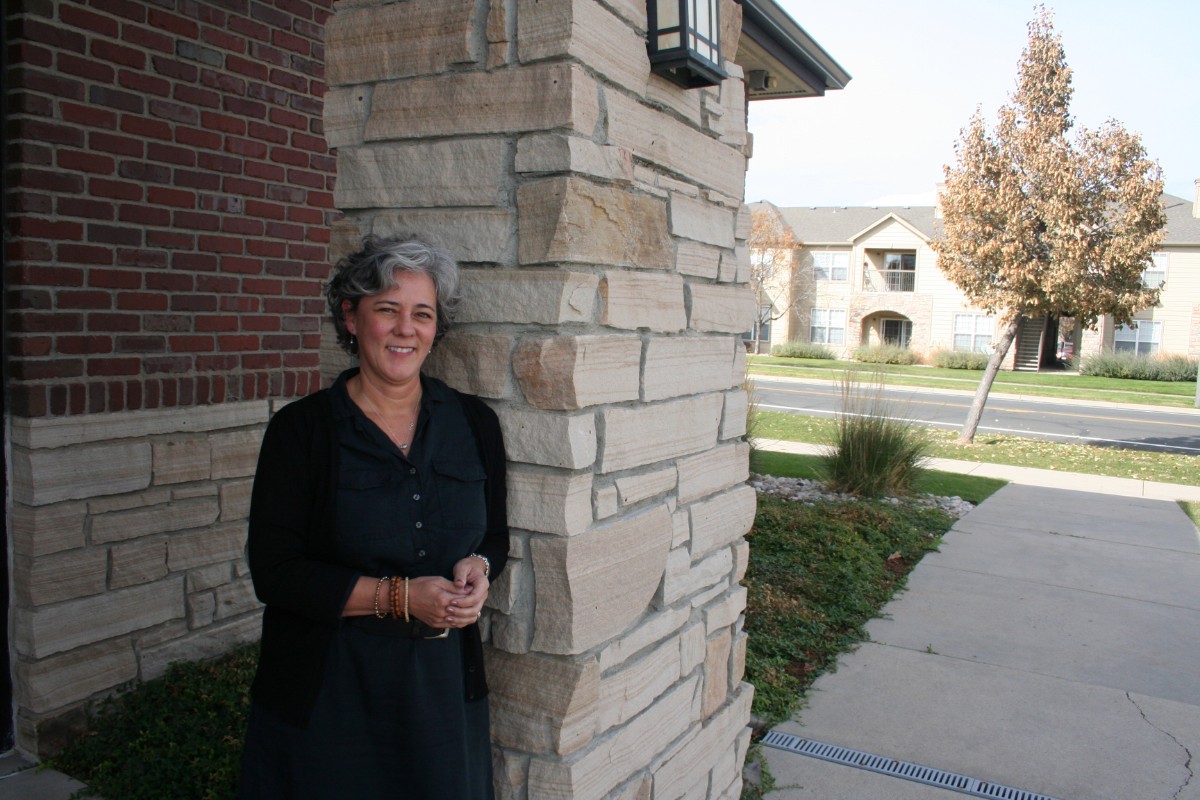 Inside our brains are neurons that grow like trees. One branch stretches out and leads to another branch, and another.

FORT COLLINS, COLORADO — When your brain is concussed, it’s like swapping out a 2019 Tesla for a gas-guzzling clunker: You can still go places and learn new things, but it takes a lot of your energy and you have to “refuel” often.

Many of the student athletes interviewed for Rattled: Oregon’s Concussion Discussion series said they had memory trouble. In the first days and weeks after their concussions, storing new information was hard when their rattled neurons weren’t working properly.

If they were hit hard again in that state, their gas tank essentially could explode.

That’s what happened to Jake Snakenberg. The 15-year-old died after back-to-back blows on his high school football field in 2004. As the nation soon would realize, in rare cases like his, a second concussion soon after the first starts a catastrophic inflammatory reaction that can lead to permanent brain damage or death.

“We didn’t know anything in 2004,” said Dr. Karen McAvoy, the psychologist at Snakenberg’s high school in Aurora, Colorado.

His death forever changed the trajectory of McAvoy’s career — and the way thousands of people across the nation approach students with concussions.

McAvoy already was interested in brain injuries before she became Snakenberg’s school psychologist. In fact, she had even started a study earlier that year to get a baseline of students’ brain function before the sports season.

So when Snakenberg died, McAvoy said, the school did a lot of soul searching. Soon, it implemented a holistic program to ensure that any student with a concussion had a support team and an action plan involving their parents, coaches, medical professionals — and teachers.

McAvoy felt strongly that breaking down the communication barriers between those groups was key. 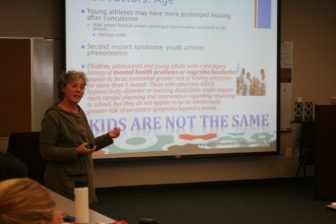 Concussion expert Dr. Karen McAvoy gives a presentation on her return-to-learn protocol — Get Schooled on Concussions — to a group of educators from Poudre School District in Fort Collins, Colorado.

“I just could never forget the small, cultural changes that we made,” she recalled over sandwiches in the small Northern Colorado college town of Fort Collins, where she now lives.

McAvoy kept thinking about those changes even after she left Grandview for a new concussion-focused department at Rocky Mountain Children’s Hospital.

Finally, one day in 2009 after a morning run, McAvoy sat down and wrote out what became REAP.

The explanatory booklet is color-coded so that time-strapped school staff and families have to read only the part of the plan that is pertinent to them.

REAP has been officially adopted by 10 states but is free to anyone, thanks in part to Snakenberg’s family, which started a charity and pays for the booklets.

“His legacy lives on through all of this,” McAvoy said.

McAvoy acknowledges that the REAP model of a team response to concussions has drawbacks. It doesn’t tend to work in large districts, she said, because even though they have more resources, there are so many players that communication can be challenging.

“You have the people, generally, in the large school district. But then, do they all talk to each other? Do they communicate? That’s a hard thing to do on anything,” she said.

But on the bright side, McAvoy also thinks that it only takes one person — a caring coach, a savvy school nurse, or a knowledgeable classroom teacher — to make a big difference.

“It just takes one champion,” she said. “There are some great people doing things out there, no matter where they are.”

Neurons build on connections. Learning one fact leads to the next and the next.

The ‘gift of time’

Within a few years, McAvoy realized that REAP was only the beginning of teaching school staff what they needed to do when a student suffered a concussion. 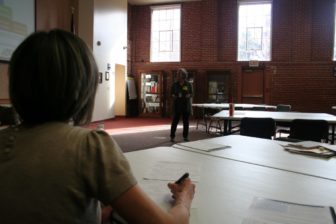 A teacher listens as Dr. Karen McAvoy (center) gives a presentation on determining qualifications and supports for schoolchildren with brain injuries in Monument, Colorado.

Some students would be out for days. Others could come back right away but would need frequent breaks or other accommodations.

The standard special-education options — an Individual Education Program (IEP) or a 504 plan — just didn’t work for most kids with concussions. Even though the types of supports are similar, concussions require immediate interventions that fade over the days and weeks that symptoms melt away. The long road to an IEP or 504 — legally binding accommodations for access to public school — would be needed only in the most extreme cases where symptoms are long-lasting or permanent.

What exactly are the in-school accommodations for concussions? REAP offers bullet points: reduce the workload, schedule strategic rest periods throughout the day, and watch for emotional support needs.

But, McAvoy said: “I wouldn’t say REAP was the end-all, be-all return to learn (protocol). I didn’t design it that way.”

McAvoy teamed up with Pennsylvania’s brain injury education expert Brenda Eagan-Johnson, and together they launched Get Schooled on Concussions in October 2014.

The resulting 41-page booklet — and its website, GetSchooledonConcussions.com — is REAP’s deep dive on the many different ways a student could need support in the classroom.

From concussion to classroom

According to Dr. Karen McAvoy, supports for students returning to school after a concussion need to be:

• Nearly instantaneous — in place by the next day.
• Phased out over time.
• Available to all students, not just athletes.
• Tailored to each student’s symptoms.
• Coordinated between medical personnel, school staff, parents and the student.
• Implemented before a student is returned to play — you can still go to school with symptoms; you can’t keep risking another injury with symptoms.
• Educator-directed. Concussion symptoms change day-to-day. School staff doesn’t need to wait for a doctor to tell them what to do, as long as they understand the condition and the right approaches to use.

Like REAP, Get Schooled is available for free online. The return-to-learn lesson plan discusses a wide range of information general education teachers might need to feel confident about supporting a concussed child.

Get Schooled advises on the difference between concussion symptoms in an elementary schooler versus a high schooler and warns that the biggest mistake teachers tend to make is to push off schoolwork and finals until a student is “better.” That usually just stresses the student out and prolongs recovery, McAvoy said.

“If you want the concussion to have the best chance to resolve before the start of yet another academic semester, you have to allow the ‘gift’ of time, rest, rehabilitation and recovery during breaks from school,” reads Get Schooled.

McAvoy is semi-retired now. She feels her time to educate the public about what to do in the event of a concussion is waning.

McAvoy worries that her professional experience can’t be replicated — few people have worked in both a clinical setting and a school setting.

“I can speak to both sides,” she says. “If I had one or the other, I wouldn’t understand how you have to sort of zig and zag on this.” 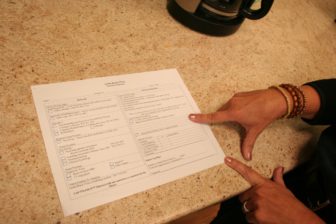 Dr. Karen McAvoy’s Colorado clinic — Asha Brain Health — uses a form to communicate with parents and schools to help get all of the adults around a concussed student to work as a team.

But she already has developed the resources that break down barriers. And she spends a lot of her time training trainers — people like school nurses and administrators who are supposed to go back to their schools and teach the staff on the frontlines how to recognize a concussion and what to do about it.

“My legacy in concussion management really is to help the school districts to help the communities,” McAvoy said.

It’s a long, slow process. People, she acknowledges, can only absorb this information in chunks.

That’s why Get Schooled on Concussions comes as a packet of informational sheets: Users can tear off or copy the sheet that is right for the situation.

That’s contrasted to Oregon’s approach, where the state’s Center for Brain Injury Research and Training has taken a longer route to developing a return-to-learn protocol. (See “Oregon Schools Fall Behind on Returning Concussed Students to Classroom,” Jan. 11, 2019). Called “In the Classroom After Concussion,” the clinically proven, 10-hour teacher training course has still reached only a few dozen school staffers. In 2019, CBIRT hopes to change that, but that will be a decade after REAP was written.

McAvoy wanted to release REAP and Get Schooled more quickly, to get this sort of information in as many schools as possible because that’s where young people with brain injuries are.

“Brain injury is not something that is treated in the hospital and then it’s fixed. It doesn’t happen like that,” McAvoy said. “It’s the ongoing — living life and going to school — that is the most important while we are rehabbing them.”

Next in the series: Learn why student athletes should not be the sole focus for schools’ concussion management.