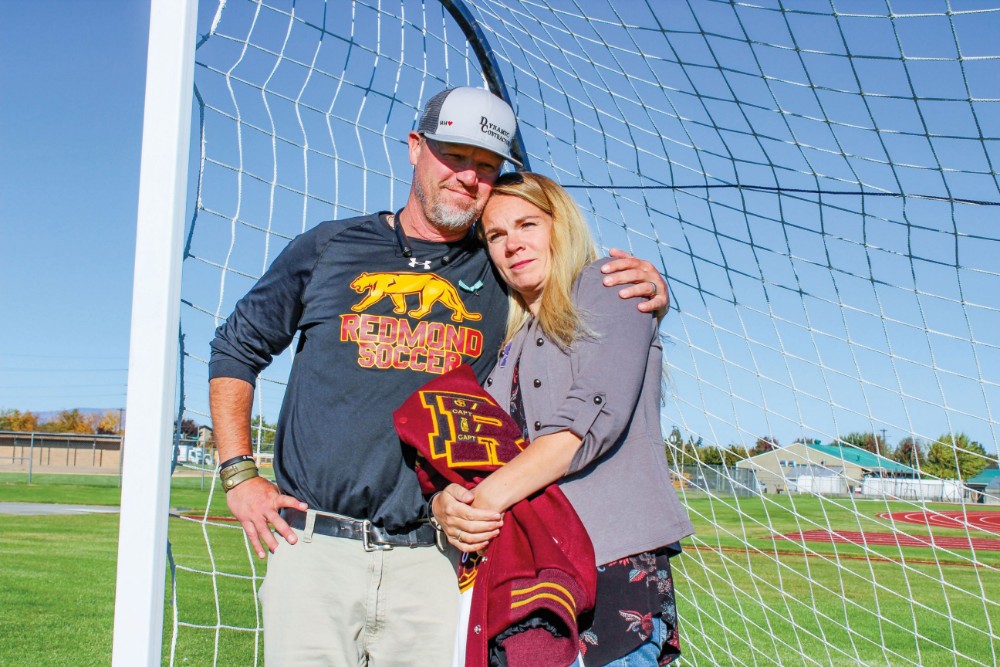 Unanswered Questions: Grieving parents wonder about the impact of their son’s concussion

It was the last few minutes of the final soccer game of the 2017 season.

Redmond High School was down 10 to nothing, but the team’s goalkeeper, 16-year-old Hunter Holmes, wasn’t about to give up.

“There was a ball out in front that he went after within a group, and a guy was coming at full speed,” recalls Hunter’s father, Travis Holmes. “It was like the kid was almost trying to stop but didn’t and clipped him. He came down on his knees, and his knee got Hunter right in the side of the head.”

Like what had happened numerous times before in games, Hunter went down. The refs called a time out. His parents watched from the bleachers — eyeing the movements of the coach and the trainer. Then they saw that Hunter was moving. He was OK.

Redmond High School lost the game and finished the season 0-12.

But then, Hunter’s headaches started, and he was diagnosed with a concussion.

It wasn’t his first — he had suffered a concussion a year before during a soccer game — but this one was different. The headaches were worse. He couldn’t concentrate.

Travis and Erika Holmes want answers. They want to know if maybe, just maybe, their son’s concussions somehow altered his way of thinking. Maybe the headaches were too much to bear. Maybe it was that girl he had been talking to. Maybe he was distraught that his team had not won a single game.

They don’t know, but they do know they want to prevent other teens from committing suicide.

A passion for soccer

Hunter was a leader — the captain of his golf and soccer teams — but he also knew how to have fun.

“He was goofy,” Erika says. “He was very friendly. He had a lot of friends.”

Hunter was a typical 16-year-old kid who hung out with his buddies, played video games, and kicked the ball around. He was the kind of kid who was nice to new students, and he didn’t care what other people thought of him. 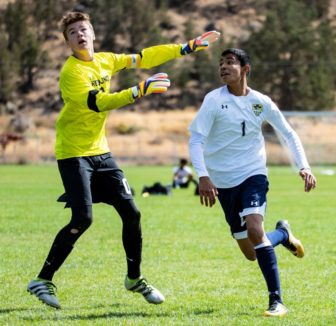 Redmond High School goalkeeper Hunter Holmes plays against Crook County High School on Sept. 30, 2017. He suffered a concussion a few weeks later during a game and then committed suicide in mid-December.

And he loved his family. Hunter was close to his 18-year-old sister, Jordan, and his 9-year-old brother, Jacob.

Following in his father’s footsteps, Hunter played baseball, basketball and golf. But his real passion was soccer. He started playing soccer as a first-grader, and his mom even coached his team.

In late middle school, he gave up baseball — much to his dad’s surprise — to pursue soccer.

He liked the competition.

“With baseball, it was a little slower. With soccer, there was constant movement,” Travis says. “He kept saying, ‘I just want to play soccer.’”

Hunter was the goalkeeper for the high school soccer team, which was composed mostly of Latinos, who soon became like a second family.

Having played sports his whole life, Hunter was used to getting knocked around, and it didn’t seem to bother his parents, either.

“I’m just a guilty dad at this. When your son goes down or something like that, it’s not concern so much. It’s like, ‘Rub some dirt on it and get back up’ kind of thing,” Travis says. “It’s just kind of how we are. It’s like all right, all right, move along.”

It’s well-established that concussions can lead to depression. And depression often is linked to suicide. But outside of veterans, there hasn’t been much research into a potential direct correlation between concussions and suicides.Researchers in Canada recently studied a quarter-million adults who had suffered concussions between 1992 and 2012 and found “the long-term risk of suicide among those with a concussion was three times the population norm.”

Their findings, published in the April 2016 issue of the Canadian Medical Association Journal, noted several limitations in their study but concluded that “these findings suggest that an association between concussion and suicide is not confined to the military.”

And they urged more research.

“Greater attention to the long-term implications of a concussion in community settings might save lives because deaths from suicide can be prevented,” they wrote.

Although Hunter had gotten knocked out a time or two, it wasn’t until Oct. 6, 2016, during a high school soccer game that he was first diagnosed with a concussion.

Redmond High School athletic trainer Cari Wood helped him get through it.

“He was out for a couple weeks. He went through the protocol,” Erika says. “He tried to go to school in the morning, and he would get really bad headaches, and he would sleep for the rest of the day and couldn’t concentrate and focus.”

His parents didn’t notice any depressive signs, though, and Hunter seemed to have made a full recovery.

Nearly a year later, though, during another soccer game, it happened again.

Again, Wood worked with him, going through the concussion protocol.

“The last one that he got was definitely the concussion that took time to even get back in school,” Travis recalls.

Headaches and trouble focusing often sent Hunter home early from school, but after some time had elapsed, his symptoms improved, things seemed to have returned to normal, and he passed the concussion protocol. He tried out for basketball, but quit after the first week because he wanted to focus more on soccer and golf his senior year.

It was a Thursday. Hunter had gone to school that day.

“We noticed there was something bugging him,” Travis recalls. “A teenager comes home, and there’s something going on. Typically, what that means is that he’s kind of tired or whatever. We’d gone through this with him a million times.”

They asked him what was up.

So, Travis and Erika took their youngest out to dinner with some friends, deciding to let Hunter cool down. They’d meet up later to figure out what was going on.

Their daughter had just finished a class in Bend and was hanging out with friends that evening.

They came home from dinner, walked in and found Hunter. He had taken his life.

“Whatever he was dealing with that particular day was obviously life-altering,” Travis says.

Travis and Erika have talked to doctors and athletic trainers about concussions but realize that nobody really knows how they affect the brain.

“In a football game, if you bruise your hamstring, you can bruise it in a few different places to have a different kind of impact on how quickly you can heal; just imagine the capacity of the brain,” Travis says.

Teen crisis line offers helpYouthline is a confidential Oregon-based teen-to-teen crisis and help line. Contact them with anything that may be bothering you; no problem is too big or too small!. Teen counselors are available to help daily from 4-10 p.m. and off-hour calls are answered by trained staff and volunteers at Lines for Life.Call:  877-968-8491
Text: teen2teen to 839863
Chat: http://www.oregonyouthline.org
Email: YouthL@LinesForLife.org

He can’t help but wonder if someday doctors will learn that getting injured in certain parts of the brain could lead to certain side effects.

Whatever the case, Travis and Erika, along with Wood, want others to take concussions seriously.

“Parents know their kids better than anyone,” Wood says. “If ever your child is not acting how they normally do, or you sense something is not right, please act on that and reach out with questions and concerns.”

If a loved one is suffering after a concussion, look for signs of depression and stay close.

“We had dealt with this thing so many times because he was just one of these guys that took failure hard,” Travis says of Hunter. “He’d be down 15 to nothing and get super upset about a goal scored on him.”

When Hunter was in one of these moods, they’d give him some space rather than try to figure out what was wrong.

“And it always worked out — except for this time,” Travis says.

Although they can’t bring Hunter back, Travis and Erika Holmes want to share their son’s story. They want to keep other families from suffering.

After Hunter took his life last December, donations came pouring in and the Central Oregon couple set up the Hunter Holmes Memorial Fund, a nonprofit organization for teen suicide awareness and sports concussions.

Travis and Erika set up an annual scholarship for two high school seniors with the funds and installed the Safe Oregon app on Chromebooks in the Redmond School District, where Hunter had been a student. The money also covers suicide prevention speakers and a video encouraging kindness and empathy.

Working with Redmond High School athletic trainer Cari Wood, as well as a producer and RHS students, Travis and Erika produced the video, titled “Your Life Matters,” that shares the message that everyone is fighting their own battle.


Wood had seen a video that was shown to hospital employees in Cleveland, Ohio, about having empathy for their patients.

“I thought it would be cool to make a video for teens that highlighted teen issues and would be relatable to them,” she says. “The family and I met, and we wanted to get across a few messages: To have empathy toward all people because everyone is facing some sort of problem in their life, even if they don’t show it. Always be kind.”

The 4 1/2-minute video shows typical high school scenes with teachers and students in their normal routines, but the words on the screen spell out what is really going on in those people’s lives.

One student doesn’t feel safe at home. A teacher just learned his wife’s cancer is back. One kid is terrified of his parents’ reaction to his grades. One girl has learned to hide her depression, while another feels invisible. The final student depicted is a soccer goalie who is congratulated by teammates after a big save, but leaves the game looking dejected. As he passes the camera you see a name on the back of his letterman’s jacket: Holmes.

“On the outside, you may look OK, but you really don’t know what’s going on,” Erika says.

Wood said the video is a resource for people going through issues, pointing them to a suicide prevention resource and relaying a simple, but important message.

“If it is you that is facing a problem, it’s OK to not be OK, and you should reach out to someone for help,” she says. “You don’t have to pretend that you’re OK if you’re not.”