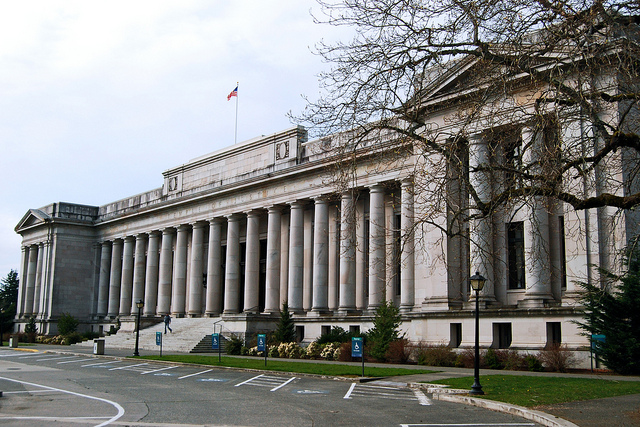 By Levi PulkkinenNovember 1, 2018No Comments

In what may prove a watershed moment for the state’s foster care system, Washington’s Supreme Court found the state has a broad duty to protect foster children from abuse.

By a 5-4 majority, the high court on Thursday sided with five former foster children subjected to more than a decade of abuse at the hands of a Pierce County couple. The decision, which affirms an appeals court ruling, gives the young women a second chance to hold the state liable for failing to protect them and provides a stronger legal footing for other foster children suing the state.

Writing for the majority, Justice Debra Stephens said the state, the lone legal guardian of foster children, is obliged to care for the children removed from their birth parents. Foster parents and others may perform the work of parenting, but the state remains responsible for ensuring the children are cared for until they leave state custody.

“The state … stands in a special relationship with foster children,” Stephens wrote for the majority. “While (the state) contracts with foster parents and others to provide day-to-day care for dependent children, the state alone is ‘custodian and caretaker of foster children.’”

While it may seem obvious that state foster care workers owed the girls protection from years of abuse by foster parents, a Superior Court judge held that the state was not obliged to protect them. Thursday’s ruling that the state has a duty to protect its wards makes it legally more difficult for the state to defend against such suits, which already have cost taxpayers tens of millions of dollars in jury verdicts over the years.

Driven in part by the opiate-addiction crisis, the number of children in Washington’s foster care system has surged to roughly 10,000. Meanwhile, the number of foster homes has shrunk from about 6,000 to about 5,000. The result: An overburdened system where social workers are often desperate to place foster kids.

The case before the Supreme Court centered on abuse that began more than 15 years ago at the home of Scott and Drew Ann Hamrick, who were regarded by the state as ideal foster parents. They took in five young girls between February 1998 and January 2000; the couple adopted them in 2002 and 2003, which ended state social workers’ oversight at the home.

No reports of abuse were made against the Hamricks prior to the adoptions. In 2011, though, Pierce County Sheriff’s Department investigators started looking into the home. They found the girls had been mistreated for years.

Scott Hamrick, who had been suspected of abuse as early as 2008, killed himself in 2011 while the investigation was underway. Drew Ann Hamrick was ultimately convicted of witness tampering and unlawful imprisonment for her role in the abuse.

The former foster children, by then older girls or young women, sued the Department of Social and Health Services in the months after Hamrick’s death. The case went to trial in 2015.

Near the close of that trial, a Pierce County Superior Court judge found the state could not be held liable for abuse the girls endured before they were adopted, in part because no claims of abuse had been made to authorities while the girls were in foster care. With that negligence claim closed, attorneys for the former foster children could only argue the state failed to properly investigate later allegations against the Hamricks. The jury ruled in the state’s favor, finding state workers were not negligent.

Writing for the majority, Stephens said the state must take reasonable steps to protect foster children from abuse. Whether state workers failed the young women in this case is a question for jurors to take up at a second trial.

Speaking Thursday, Beauregard celebrated the Supreme Court’s ruling for declaring “what should be obvious.”

Department of Children, Youth and Families Secretary Ross Hunter said in a written statement that the agency will incorporate the court’s direction into its practices going forward.

“Our commitment is to strengthen the way we respond to allegations of child abuse and neglect in child welfare cases,” Hunter said. “We intend to improve the quality of care for the children we serve by reviewing and reforming all aspects of how this agency operates.”

In statements to the court, attorneys for the state tried to shift responsibility from child welfare authorities to foster parents. The state argued that foster parents “are responsible for the protection, care, supervision, and nurturing of” children placed with them.

Assistant Attorney General Peter Helmberger argued state social workers would, under the now-affirmed appellate decision, be required to probe for indications of abuse by foster parents “even where no evidence exists.”

“The duty found by the court of appeals apparently does not depend on whether a (state) social worker failed to act on evidence, a report, or information,” Helmberger wrote in pleadings to the court. “It imposed a duty that will compel social workers to ferret out information from foster children about their foster family.”

Attorneys for the former foster children argued child services investigators found no evidence of abuse because they didn’t look. They contend a year passed without a home inspection, which were required to occur every 90 days. The girls were denied private meetings with social workers and threatened into silence by the Hamricks.

The dissenting justices opined that state social workers should not be held responsible for protecting children who are not in the state’s physical custody. Writing in dissent, Justice Barbara Madsen argued that, once a child is outside the reach of state employees, “no amount of due diligence or periodic investigation could prevent much of the harm done by third parties.”

“There is no evidence that the Legislature sought to burden the state with the duty of having an ever vigilant and watchful eye over foster parents,” Madsen wrote. “Rather the duty imposed on the state is to monitor foster home placement monthly and to investigate alleged violations when they are discovered.”

In the majority opinion, Stephens dismissed that contention. The state, she wrote, is not expected to prevent all abuse. It can be held liable, though, if state workers fail to reasonably address dangers to foster children.

Beauregard said he believes the decision will allow other foster children whose abuse was undetected by state authorities to bring claims, though he said it is too early to tell how many claims may be made.