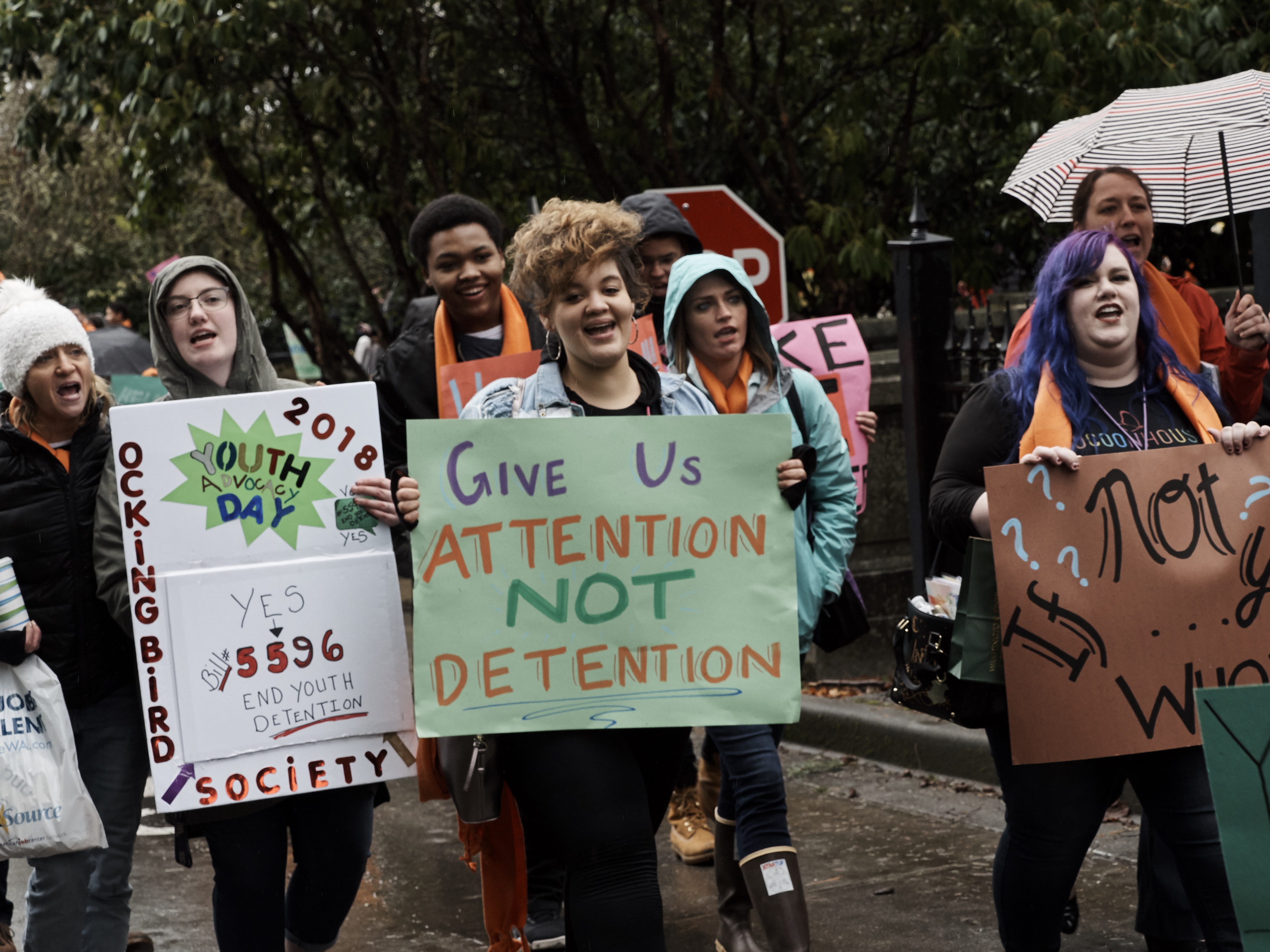 Washington weighs an end to locking kids up for truancy

As a teenager in foster care, Zack Zibrosky was detained eight times, five for running away from the same group home where some of the other kids had a history of aggressive behavior. Running away is considered a status offense, an activity that is prohibited only if you are a minor.

In between trips to detention, Zibrosky spent time on the streets. School fell by the wayside amidst all that upheaval. 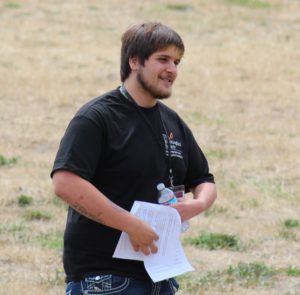 Zack Zibrosky, 20, said judges should link youth with services before locking them up for issues like truancy.

“Kids who are going through this obviously have some type of turmoil or something in their life that’s not right,” said Zibrosky, now 20 and a youth advocate with the Mockingbird Society. Instead of locking kids up, he said, judges and case workers need to put more effort into finding out why a youth is acting out and tailoring their response to that kid’s needs.

A bill (SB 5596) moving through the state legislature would end the use of detention in truancy matters starting next summer, and would phase out detention for all other status offenses by 2020. In the meantime, minors detained for status offenses would have to be entirely separated from youth detained for criminal violations. These changes would bring Washington into compliance with federal standards for the treatment of juvenile offenders.

The federal Juvenile Justice and Delinquency Prevention Act provides grants to states in exchange for compliance with four basic standards, including that they cannot detain youth for status offenses. But the federal law offers one loophole: If a judge has ordered a youth not to commit a status offense again, failure to obey that order can lead to detention.

These are known as valid court order exceptions, and Washington judges used them to place juveniles in detention 1,781 times in 2016. A recent report from the U.S. Department of Justice has sown some doubts about the integrity of federal data on states’ compliance with the Juvenile Justice and Delinquency Protection Act requirements for status offenders, but numbers from 2014 suggest that Washington uses valid-court-order exceptions to detain status offenders more than any other state.

“The entire country turned the corner on the utilization of this [valid court orders] for detaining youth ahead of Washington State,” the bill’s prime sponsor, state Senator Jeannie Darneille, a Democrat from Tacoma, told her colleagues in a January committee hearing.

Other states, Darneille said, have demonstrated that “we have other options to work with families in recognizing what the problems really are and providing them meaningful relief, as opposed to incarcerating a child.”

A bill to eliminate valid-court-order exceptions foundered in the legislature last year, but this session could be different. Darneille’s detention phase-out bill passed the state Senate last week; the House has until March 2 to pass the measure. With Democrats now controlling both the Senate and House, along with the governor’s office, the measure stands a better chance this year.

“Studies have shown that detaining low-risk children is detrimental in every area of growth for a child,” – Judge Anthony Capizzi

But the bill faces opposition from some judges, who say they need detention as a last resort to get kids to comply with their orders.

“Unless the court has the ability to back up its order with teeth in the form of sanctions if all else fails, the system is going to break down,” said Island County Superior Court Judge Alan Hancock in an interview with The Chronicle of Social Change.

In his 29 years on the bench, Hancock said, he’s seen youth crime and truancy decline. He attributes that in part to Washington’s 1995 “Becca Bill,” passed after the murder of a 13-year-old runaway as a way to give parents and courts more control over runaway, truant and at-risk kids.

The law requires school districts to file a petition in juvenile court when a child has a certain number of unexcused absences and other interventions haven’t worked. The Becca Bill also allows guardians to file an “at-risk youth” petition to get help with youths who run away or are beyond parental control.

After the Becca law’s implementation, the number of minors being detained for noncriminal offenses shot up, and many now question whether the law is hurting kids more than helping them.

Statewide, 13 percent of all juvenile detention admissions in 2016 were for status offenses, as opposed to criminal offenses, according to a report by the Washington State Center for Court Research.

But judges’ use of detention varies widely across the state. Some counties, such as Clark County, rarely detain youth for status offenses. In others, including Grays Harbor and Franklin Counties, one-third to nearly one-half of all juvenile detention admissions are for status offenses. Truancy petitions, followed closely by at-risk youth petitions, make up the vast majority of these cases.

Regardless of the number of kids affected, proponents of reform say it’s counterproductive — and even harmful — to lock up troubled kids.

“Studies have shown that detaining low-risk children is detrimental in every area of growth for a child,” said Judge Anthony Capizzi, president of the National Council of Juvenile and Family Court Judges. The Council was instrumental in establishing the valid-court-order exception in 1980, but in 2010 called for its elimination.

Just being in a courtroom, let alone being handcuffed or detained, is traumatic for children, said Capizzi, who has worked as a juvenile court judge in Montgomery County, Ohio, for 13 years.

“Every time we touch that child, that could be an additional traumatic event,” he said.

Some counties in Washington have shown that alternatives to detention for status offenders can work. Clark County, just north of Portland, created a multi-layered truancy intervention program shortly after the Becca law went into effect. When school districts file a truancy petition there, it triggers a series of increasingly intensive interventions that can include mental health and chemical dependency treatment, as well as training and support for parents coping with unruly teens. The county saw just one truancy-related detention in 2016.

A 2016 law requires school districts across the state to implement promising approaches to address truancy. As of this school year, every Washington school district must coordinate with the local juvenile court to set up a community truancy board or other truancy intervention program. Schools still file truancy petitions, but courts put them on hold while trained board members identify barriers to children’s attendance and connect families with services.

Despite increasing enrollment, the state saw a drop in total truancy petitions filed last year, according to the Office of Superintendent of Public Instruction.

State lawmakers should give these new community truancy boards a chance to work, said Judge Hancock, before stripping judges of their authority to enforce the state’s truancy laws.

Another barrier to reducing detention, judges say, is the state’s shortage of secure crisis residential centers — only eight beds inside two juvenile detention facilities. The state has another 52 beds in non-secure facilities.

“If we had secure crisis residential centers, we’d be happy to use them,” Hancock said.

One of the bills under consideration, SB 6467, would site new crisis residential centers in three counties, to be selected from among those with high rates of detaining status offenders. It would also direct more resources to those counties’ community truancy boards as a way to test alternatives to juvenile detention.

On the national level, a bill to reauthorize the Juvenile Justice and Delinquency Prevention Act would eliminate the federal valid court order exception. States would have three years to stop detaining youths for contempt of court orders related to status offenses, or risk losing part of their federal grant for juvenile justice.

Versions of the legislation passed out of both the House and Senate, but Sen. Tom Cotton (R–Ark.) is holding up the bill because he opposes taking the valid-court-order exception away from judges.

This story was originally published by The Chronicle of Social Change, a nonprofit news publication that covers issues affecting vulnerable children, youth and their families.