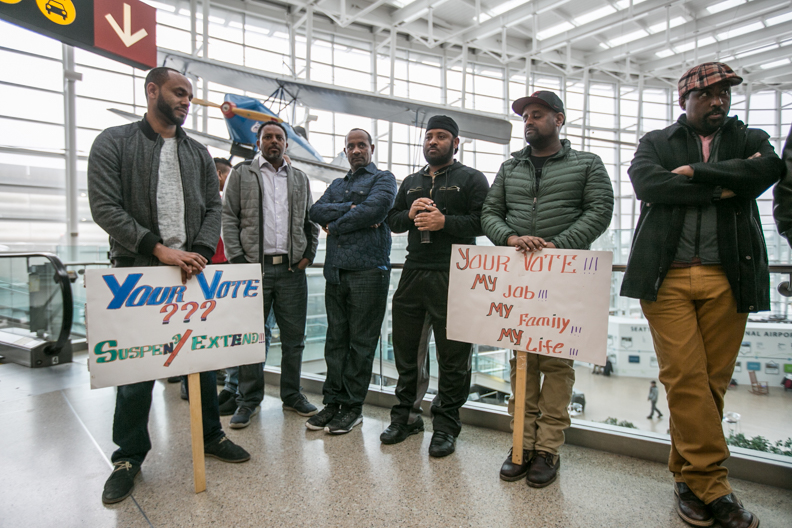 After a one-day walkout that helped win a delay of a clean-air rule, hundreds of independent truckers at the ports of Seattle and Tacoma say they still can’t fathom how their meager earnings will allow them to buy newer and cleaner trucks by the new deadline of next Jan. 1.

The truckers remained nervous as they got behind the wheel again Wednesday after winning a nine-month reprieve from the ports on a looming April 1 deadline for the more modern but far more expensive trucks.

The drivers said they were unsatisfied by the port commissioners’ vote Tuesday to delay putting the clean-truck requirement into effect until Jan. 1 and establish a $1 million loan program to help drivers buy newer, cleaner trucks. Port staff members said they will also seek grants for new trucks from other sources.

“They didn’t solve the problem,” said 50-year-old Yemane Behane, whose 2001 truck fails to meet the federal air-quality standards for diesel trucks that went into effect in 2007.

He said the extension doesn’t change any of the fundamental challenges of trying to buy a new truck without expectations of a higher income: “I’m gonna be the same person, the same income, the same truck.”

Many of the ports’ independent drivers are immigrants who own their trucks and contract with dispatching companies to pick up and deliver containers filled with consumer goods to warehouses and rail yards. With some earning as little as minimum wage once their expenses are paid, they said there is no way they can afford the $40,000 to $60,000 cost of a truck outfitted with a newer diesel filter system.

Several hundred drivers staged a walkout Tuesday in order to attend the port commissioners’ meeting, a crowd large enough that it filled the main meeting room at Seattle Tacoma International Airport and spilled out into the hallway. Dozens more filed into a second viewing room set up by port officials to allow drivers to watch the meeting remotely.

The drivers, many wearing baseball caps, cheered fellow drivers when they testified. The crowd grumbled disapprovingly when a trucking company representative urged faster enforcement of the new rules. 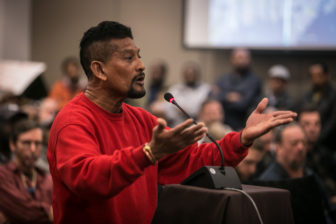 The ports in 2008 committed to upgrading the truck fleet to the newer and cleaner trucks by Jan. 1 of this year. But only about half the trucks hit that deadline. On Tuesday Seattle and Tacoma port commissioners met to impose a new April 1 deadline. But commissioners agreed they do not have much information about the independent drivers who make up an estimated 80 percent of truckers serving the ports.

“Ultimately, whose lives are we impacting?” asked Seattle Port Commissioner Fred Felleman. “I feel irresponsible in taking a vote not knowing who I’m impacting.”

In fact, the port officials don’t even know exactly how many truck drivers are affected. The ports say 53 percent of the approximately 4,500 trucks registered to do business at the ports comply with the clean-air rules. Driver Yared Meconnen, who helped organize the walkout and lobbying campaign, told port commissioners that more than 2,000 drivers still own the older trucks.

“There are a lot of brown faces in this room,” Bowman said.

Seattle Port Commissioner Courtney Gregoire encouraged the drivers to “please stay this organized and help push us in the right direction.”

Nearly 20 drivers, including immigrants from Eritrea, Ethiopia, Jamaica and Sri Lanka, testified that the clean-truck mandate forces them to make an impossible choice between doing their part to limit deadly diesel emissions and risking their financial well-being by going into debt to buy new trucks.

“I do believe in clean air for my kids and the next generation,” said Samuel Gebre, who has three children and has been driving his own truck for six years. “Please, please give us some time to come (up) with a better idea.” 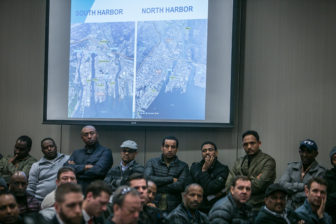 Independent short haul truckers who pick up loads at the ports of Seattle and Tacoma. “There are a lot of brown faces in this room,” said Seattle Port Commissioner Stephanie Bowman.

The Northwest Seaport Alliance, an agency formed in 2015 to merge some of the operations of the Seattle and Tacoma ports, missed its self-imposed Jan. 1, 2018 voluntary deadline set a decade ago to begin turning away trucks built before 2007.

The 2007 federal requirement for cleaner diesel trucks was imposed on truck makers. Many trucks manufactured before 2007 remain legally on the road.

Diesel pollution causes blood vessels to constrict, elevates blood pressure and leads to increased rates of asthma and cancer. A 2008 federal study showed that cancer risks are elevated in areas near the Port of Seattle, with the heaviest risks concentrated in the low-income neighborhoods of South Park and Georgetown. Air pollution each year kills about 1,000 Washingtonians.

At Tuesday’s meeting, Craig Kenworthy, executive director of the Puget Sound Clean Air Agency, urged commissioners to keep the commitment they made to reduce pollution.

“You have benefited collectively from this promise for 10 years over and over again,” Kenworthy said. “It’s time to keep it.”

Under the compromise approved Tuesday, the ports will begin enforcing the new standards on April 1, 2018, but older trucks will still be allowed to pick up and deliver shipping containers provided they register with the ports, according to Jason Jordan, director of environmental and planning services at the Seaport Alliance.

“I used all my credit cards. I borrowed money from my friends and family.” — Driver Abrahm Abrha

A group of 10 trucking company owners who bought new trucks in anticipation of the original deadline have said they intend to file a lawsuit against the Seaport Alliance if the April deadline was extended. The owners say the enforcement delay forces them to compete with other drivers and companies who opted not to invest in new trucks.

Seaport officials are considering what they can do to reward drivers who have upgraded their trucks. One idea is special access concessions that would allow compliant trucks to get in and out of the terminals faster, said Nick Demerice, Seaport spokesperson, but, he noted, “we don’t know exactly what that will look like yet.”

The loan program is designed to reduce the risk for lenders who might otherwise reject applicants with low incomes and bad credit histories, according to Seaport Alliance staff.

The loan funding is contingent on approval of a bill in the state Legislature that would allow the Seaport Alliance to commit money to reduce pollution. House Bill 2540 and Senate Bill 6207, which have both been voted out of committee, include provisions that tweak the language of a clean energy bill passed in 2007. “This is a technical fix to meet the original intent of that bill,” Demerice said.

Port officials say they will work with a Community Development Financial Institution to set up the loan program, giving drivers who take out loans access to counseling and other services for low-income borrowers.

In addition, commissioners agreed to leave the new diesel emissions requirements in place until 2025 to give drivers some assurance that the rules will not suddenly change.

Otherwise, Felleman said, “Folks could be looking for a new truck before they are done paying for the first one.”

Many drivers say they regret buying newer trucks with the help of a grant program administered by the Puget Sound Clean Air Agency and the Seaport Alliance between 2014 and 2017. The grant money, which matched about half the cost of an updated vehicle, left many in debt with trucks that are not built for short-haul deliveries and often break down as a result, they say.

“I am a victim of this program,” Abrahm Abrha told the commissioners at Tuesday’s meeting. Abrha, 45, received a $20,000 matching grant from the so-called ScRAPS program to replace his 2001 truck with a 2010 model. Within a few months, Abrha’s new truck started having maintenance problems, which added up to $20,000 in repairs.

“Now I don’t have anything,” said Abrha after the meeting. “I used all my credit cards. I borrowed money from my friends and family.” 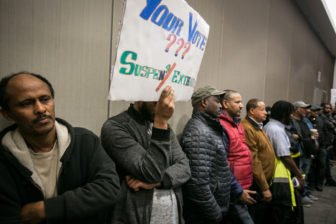 “The time that they’ve allotted will give us a little breathing space,” said Sinclair, adding that because the industry is ultimately moving toward electric trucks, drivers will soon face another expensive hurdle.

The ports did not notice “any significant slowdowns at the terminals” on Tuesday as a result of the drivers’ walk out, Demerice said.