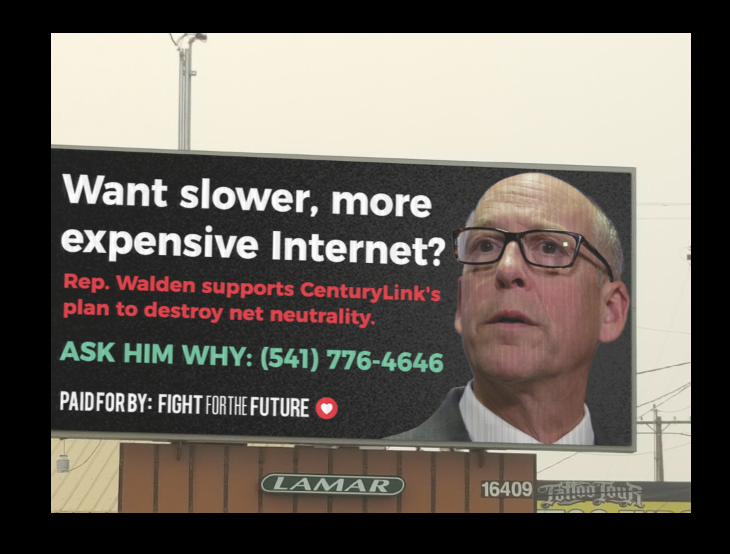 If you’ve been following the debate about net neutrality, then by now you’ve heard the news – shiny new billboards just off Interstate 5 in Medford calling out U.S. Rep. Greg Walden for his purportedly pro-business approach to the internet.

They were put there by a group called Fight for the Future, an internet freedom advocacy group that crowdfunded about nine of these billboards nationwide.

Walden’s was unveiled on Aug. 29, to the astonishment of probably no one, as the Federal Communications Commission headed into its final day of public comment as to whether it ought to repeal the net neutrality protections put in place in 2014 during the Obama administration.

If you need a one-sentence primer, Fight for the Future’s Evan Greer describes net neutrality protections as designed to “prevent companies like Comcast and Verizon from charging extra fees, censoring websites, or slowing down online content.” The slightly longer version, explained very well by William Brangham at PBS, is in the footnotes.[1] Until Aug. 30, the FCC was collecting public comments on FCC chair Ajit Pai’s plan to repeal the protections, which he has called burdensome and said stifle competition and innovation. You can see more on his take in the PBS video above.

Walden’s support of the FCC’s repeal effort has had him on the hot seat since he voiced early support for the repeal. Before that, the seat, arguably, was already very warm, given that Walden has never been a fan of net neutrality protections, opposing their creation back when they were unveiled in 2014. He since has been criticized for taking contributions from telecommunications companies, namely Comcast, while chairing the House telecommunications subcommittee that’s hearing the net neutrality debate. Comcast is one of four telecom companies that own nearly all of America’s internet infrastructure. The four companies – which also include Verizon, AT&T and Charter – have been outspending net neutrality supporters in donations to House representatives considering repeal of the rules.[2]

People have had quite a lot to say about net neutrality throughout all this. As reported by Recode Aug. 30, the FCC received more than 21 million public comments regarding net neutrality during the push to repeal protections. And companies like Google, Amazon, Netflix, Reddit and at least another 80,000 websites observed a day of protest on July 12, displaying messages in support of net neutrality.

Those messages were read by anyone who tried to search the internet or buy anything on Amazon that day. They also were covered widely by the media and joined by countless other web businesses and individuals who wished to fly their own net neutrality banner without official fanfare. Many users of these sites submitted comments to the FCC in response, a vast number of them form letters that opponents now wish to have disqualified from public comment, according to the piece from Recode cited above.

But setting aside the partisan ideology that’s now sparkling around the edge of all this – like diamonds calling crows – there’s an important question about what net neutrality means for Oregon. So as we await a decision from the FCC, I’ve done my best to understand the basics of it, since it focuses on another kind of openness that Oregonians care deeply about: the ability of its citizenry to access the internet.

So here’s why this matters more in Oregon than it might matter, say, in the good state of Rhode Island. Because unlike the “Hope” state, which sits snug under an umbrella of internet coverage, Oregon is about half internet desert. Aside from cell service, the gaps in internet coverage in this state are nearly as far and wide as the high deserts themselves. They cover much of the forested stretches of the Coast Range between the Pacific Ocean and the Willamette Valley. And the vast salt lakes southeast of Madras. They ring the hot springs of Klamath Falls. And sweep the gorgeous expanse of dry brush and steep slopes from the Antelope Range to Steens Mountain in the southeast corner of the state. There are other pockets, too. Between Madras and La Grande. Between La Grande and Enterprise, then north. And over the Malheur National Forest.

This is why Greg Walden sounded the alarm about net neutrality in the first place. Because he’s in touch with the fact that a good number of small ISPs – the kind that serve the internet deserts of Oregon that Walden represents – feared early on that the increased regulation associated with net neutrality protections would cost big dollars in compliance costs. Small ISPs would rather spend that money on getting the internet to rural people than policing it. Fair enough. So here I’ll point out that there’s another map that looks really quite similar to Oregon’s internet coverage map. It’s Walden’s district map. Thus, it stands to reason that somebody whose constituents happen to rely on small ISPs, if they can find one, is concerned about what those small ISPs have to say. That’s a good thing.

Digging past all the arguments about big business and people being in other people’s pockets, what remains at issue is really a simple question: Which companies do net neutrality rules apply to? Because conceived as they are to protect us from Comcast, AT&T, Charter and Verizon, if these rules aren’t conceived correctly they will indeed layer costs onto an untold number of little ISPs that bring internet service to millions of Americans in the farthest flung corners of the map, including Oregon.

In one of only a few articles to take seriously the issue of rural telecommunications amid the net neutrality debate, reporter Jacob Kastrenakes of the Verge did an awesome job of answering this question in July. In the article, he explains how the FCC has indeed had to react to the trouble net neutrality protections could have in rural areas with a quick exemption to small ISPs, and did so soon after protections first took hold:

Still, as Kastrenakes reports, that exemption is still temporary. And if it doesn’t stand firm, small ISPs do indeed face tens of thousands of dollars in extra costs. These aren’t the Comcasts of the world, for which tens of thousands of dollars are pocket lint. Instead, very often they are mom-and-pop shops, businesses far more likely to shutter than to shoulder those kinds of costs.

So, it’s a cool billboard. But let’s give Walden a break here. If we can set aside the knee-jerk frothing at the mouth that’s now the default for public discourse, it’s easy to see that there’s a real concern for rural Oregon in the net neutrality debate.

That said, Walden’s not totally off the hook. If he’s really representing rural Oregon – and also the more populated areas of his district – then he needs to think less about whether net neutrality protections exist at all and more about which companies they exist to regulate. Because big ISPs like Comcast can indeed come to dominate the marketplace if they’re able to force, say, streaming services like Netflix to operate in ways that exclude the functionality of streaming services on other systems. And they also can extract big fees from users like Netflix and use that extra revenue to build up infrastructure that pushes smaller ISPs out of the market.

All considered, the best case for Oregon seems to be if net neutrality protections remain in place but make permanent the exemptions that allow small ISPs to continue to operate without added compliance costs. A blanket repeal without a plan for what comes next just doesn’t make sense for any of us in Oregon – whether we’re rural residents or living on the limited land where there’s internet choice.

Almost all of us in America get our Internet access via one main provider. These are the telecom and cable giants like Verizon, Comcast, Charter, Time Warner. They provide the infrastructure that delivers the bounty of the Web to our homes and phones: sites and apps like Google, Netflix, Facebook, Instagram, you name it.

The telecoms build the highway. The other guys are like the cars traveling that highway.

The idea of net neutrality is that the telecoms have to treat that highway as an open road. They can’t pick and choose which Web sites or services get to you faster or slower. The fear is that, if they do have that power, they will be tempted to favor their content, their sites, their own videos over a competitor’s.

But the telecoms argue that’s not fair, they should be able to control that flow, and be able to charge more for faster access.

[2] The donations continue. Here’s the latest on Walden’s Comcast donations from Open Secrets. Or from MapLight, if you prefer.