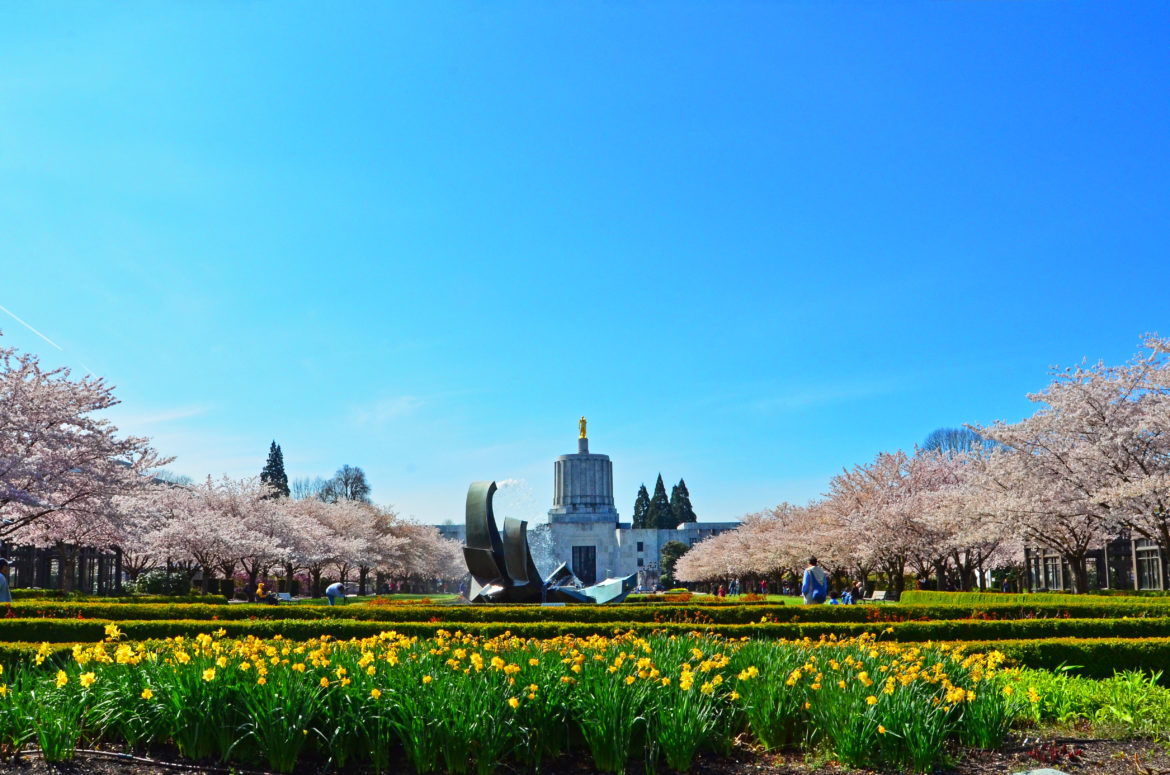 After Anne Saker, then a reporter for The Oregonian, posted the list of names online, three people called. Three. The first, a sobbing woman, had found an uncle, long lost. The other two also found family members, also missing.

All wrote letters to Saker later – beautiful letters, she said – thanking her for doing her job. And for putting up the two-year fight that ultimately prompted the Oregon Department of Human Services to release the names of those whose cremations were paid for by the state of Oregon through a fund for the indigent.

It was a fight that had lasted two years. And in the middle of it was a guy named Pete Shepherd.

So who is this Pete Shepherd, anyway?

In my last column, as I rounded up a suite of pro-transparency proposals in the Oregon Legislature, I noted Shepherd had, as a private citizen, made comments and testimony on bills central to the reform of the Oregon Public Records Law.

“I’m just a citizen. And my interest has been a long-standing interest,” Shepherd said in a recent interview.

He was a senior at the University of Oregon during the Watergate era when he wrote articles for the Daily Emerald and had an interest in journalism, he said. He went to law school around the time the Oregon Legislature passed its triumvirate of statutes responding to the overall national discussion about open government: the Oregon Public Records Law, the Public Meetings Law, and the Reporters Shield Law.

It’s this history he relays today when he talks about his interest in transparency reform. But many know Shepherd as a former Department of Justice attorney under former Attorney General Hardy Myers, someone who spent approximately eight years responding to appeals for public records for that office, and developed sophisticated knowledge of Oregon Public Records Law.

It’s this part of his work that accounts, in part, for why Shepherd was so well regarded by members of the Committee on General Government and Accountability in the Legislature, to which he submitted dozens of pages of testimony on bills brought by the governor, the attorney general, and others that I discussed in my last column. And this is the history Shepherd is less eager to discuss. It reflects poorly on his record on transparency. Perhaps that’s why his testimony to the Legislature on HB 2101 includes a passage about why the rate at which records are ordered disclosed from attorney generals should not be used as a metric to judge one’s interest in transparency, or the depth of their commitment to it.

“The number or rate of orders granting petitions and ordering state agencies to disclose records reveals little or nothing useful to the Assembly …” he wrote.

He has his reasons. And they come down to asserting that there are lots of other levers to pull in favor of transparency, and that sometimes lawyers just pull them without issuing an actual order. Point taken there.

Yet at a certain juncture, the number of times Shepherd released records on behalf of the public in his capacity to consider their interests does matter to his present-day persona as a friend of transparency. So let’s get that number out there. In approximately eight years of considering these issues at DOJ, Shepherd ordered records disclosed from public agencies just seven times. To put that number in perspective, Mary H. Williams, the deputy attorney general under John Kroger and then Ellen Rosenblum, matched that number of orders in her first 14 months on the job.

So why, then, is Shepherd being taken so seriously in legislative talks about reform?

Yet in today’s debates, Shepherd’s popularity has been difficult for transparency advocates to overcome. I’ll disclose here that I am one of those people. That I serve on the Society of Professional Journalists Sunshine Committee and also on the board of Open Oregon. It should come as no surprise to anyone reading this that I have a dog in the fight – my interest and support for a more transparent Oregon is something I have long advocated.

Which is why I want to call out Shepherd’s recent activities in the Legislature and reflect on their roots in an era many members of the media and other transparency advocates regard as one of secrecy.

In the past few weeks, as Shepherd’s testimony has been critical to reform debates, he has caused a committee to scrap new language proposed by the Oregon attorney general that would have provided a framework for judges and government workers considering public records issues  and to guide future legislatures on public records work. He has since written or co-written at least 14 amendments to Rep. John Huffman’s bill to create a process to review the now more than 550 exemptions to the law, effectively gutting and stuffing the proposal.

Some of those revisions included subtle changes that would have limited the ability to release records from statutory programs, removed expectations of agency consistency from one records release to the next, and limited the recovery of legal fees in lawsuits against public agencies that don’t comply with orders to release documents. He’s also weighed in on the governor’s proposal to create a position in state office that would advocate for transparency.

But I want to remind everyone currently considering this view that we have been down this road. We have tested that thinking. And what it led to were things like three families spending years trying to find their missing relatives, all because the state of Oregon disposed of their remains, then kept it a secret.

Anne Saker came to this knowledge quite by accident. It was in roughly 2007, when an older man died on the streets of Portland as an indigent, though he had a wallet in his pocket that showed where he lived, the name of his sister and her contact information. The mistake in disposing of his body without notifying relatives was uncovered when the sister, who lived in Florida, began calling around in search of him, saying he’d been out of touch. Reporter Michele Roberts put together an article highlighting the debacle of the failure to notify his next of kin.

When it was over, “we said why don’t we see if this has happened to anybody else?” Saker said.

So she asked the Department of Human Services for a list of all people whose remains were handled with payment from the Oregon Indigent Burial Fund, including names, dates of cremation, and the counties in which they were cremated. It took two years for The Oregonian to fight its way to the release of those records with help from attorney Duane Bosworth. And the decision to withhold the records rested very much on a presumed public interest in “nondisclosure,” the same interest Shepherd advocates should be part of transparency reform today. In making the decision to withhold the cremation records, Shepherd leaned on a state law that requires public agencies to keep records related to public assistance confidential – a law that typically applies to people receiving Medicaid and food stamps, not cremations. (In some cases, such as the elderly gentleman located by his sister in Florida, bodies are given to Oregon Health Sciences University for use in the anatomy lab.)

What Saker found was “what happened to that poor gentleman is extremely rare.” But The Oregonian went further, using the information it fought for to create the first database for unclaimed bodies on the internet. Saker and her colleagues compiled the names, the date of death, the funeral home where the body went, and the funeral home’s phone number for the public to use.

“Then about a year later I got a phone call from a woman who was sobbing because she had made it her purpose in life to find her lost uncle. And she had been looking and looking and looking and she came across our database. And she typed in her uncle’s name and there he was,” Saker said. “I could never understand the reason that Oregon was so reluctant to put those names out there. If the state had built a database like this and sort of marketed it, there are lots of organizations out there that are dedicated to helping find lost loved ones. Oregon could have put itself at the forefront of this.”

This opportunity was missed because the interest in nondisclosure, as Shepherd calls it, prevented it. This wasn’t the only time a decision was made in this vein on Shepherd’s watch, and galled Oregonians when it came to light. For example, the decision to deny public access to information about PERS also was Shepherd’s, as were decisions that obscured public understanding of the University of Oregon’s sports marketing practices and its spending on arena construction.

Those decisions have since been reversed. But Shepherd continues to press his philosophy – that nondisclosure is in the public interest – while legislators debate the best possible structure for a committee to review exemptions to the Oregon Public Records Law under HB 2101.

While the Legislature crafts that system, Shepherd said: “You just can’t escape the reality that all of those exemptions – some of them probably wrong-headed – reflect somebody’s idea of why there is a public interest in nondisclosure, too. And I don’t think the question goes away just by avoiding it.”

But the argument here is not whether privacy can be at issue. It’s whether creating a statutory requirement to do gymnastics to imagine those interests ought to be required in a law intended to foster an open government.

No doubt, it probably gives Shepherd heartburn to see the present Department of Justice move away from this idea, and from his body of work. He should do whatever he wants to express his views about this in the Oregon Legislature and to try to move the needle. What’s democracy for if not making room for Pete Shepherd?

Yet my hope is that legislators understand the history here and accept that these concepts echo a bygone era, one that ran its course in an administration that presumed privacy protections with such frequency that their overreach has sparked some of the very reform efforts they must now steward.

Passion and experience are no substitute for a constituency. Lawmakers presiding over reform should ask themselves why someone with Shepherd’s expertise is today a lone voice in a sea of advocates urging that we find a new path.

Note: This post has been corrected. It originally said bodies handed with payment from the Oregon Indigent Burial Fund were buried. The bodies are cremated or in some cases given to the Oregon Health Sciences University for use in its anatomy lab.