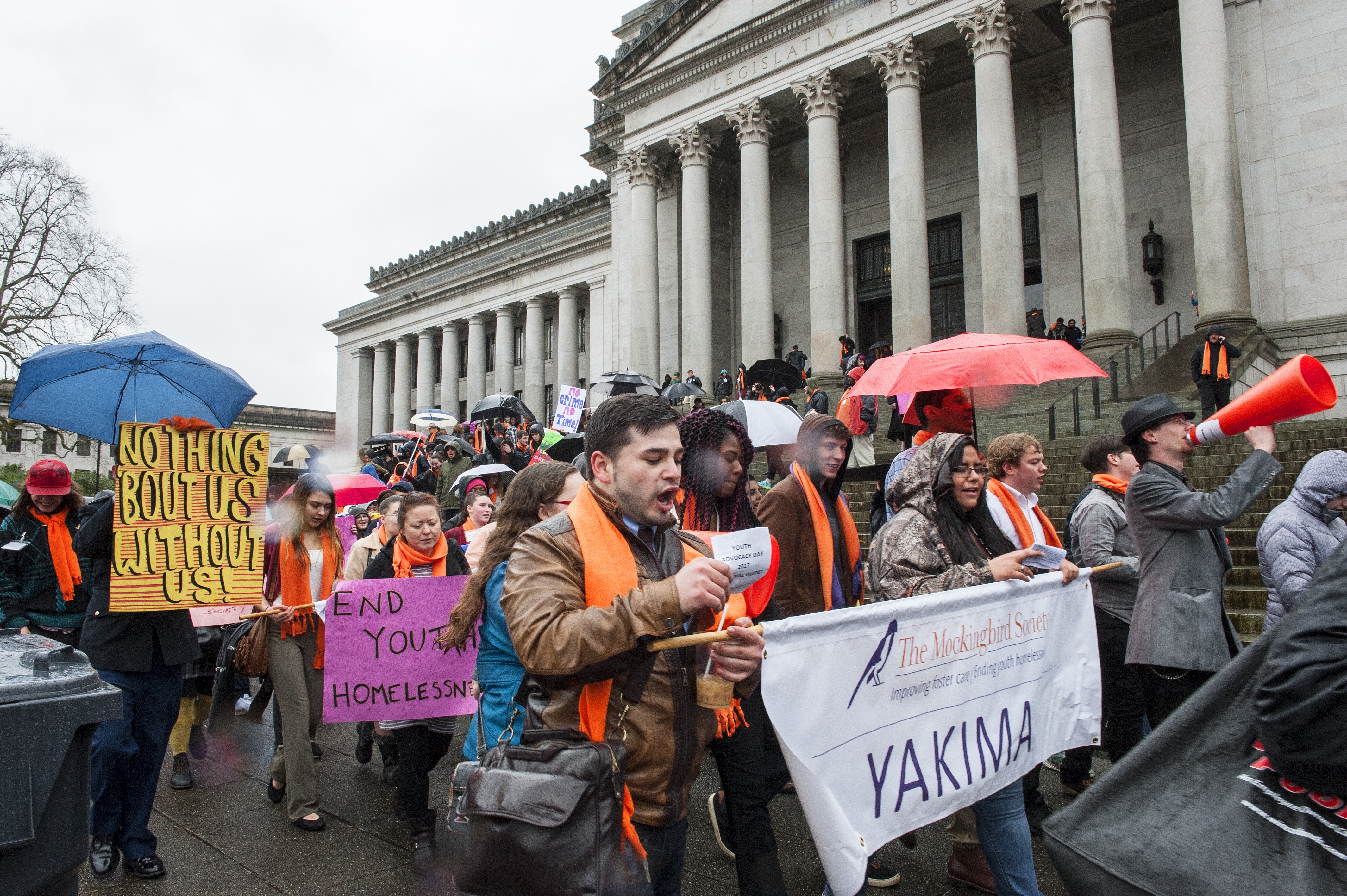 Republicans and Democrats in Olympia insist they want to shore up the state’s failing foster care system, but major reforms could falter as they head into a special legislative session to hammer out budget and policy proposals that remain miles apart.

Compared with their Republican Senate colleagues, Democrats who control the House have proposed millions more in spending on programs to help foster kids and birth families caught up in the child welfare system.

The House-proposed increases include a bump in the Children’s Administration budget, money to hire more social workers and increase their salaries, and funding for a new, more prevention-focused children’s department.

A more austere Republican Senate budget omits these and other items, which advocates and some lawmakers say are crucial to rebuilding a child welfare system facing a crisis-level shortage of foster homes and crippling social worker turnover.

The Senate Republican budget instead makes a handful of targeted investments in efforts to support foster parents and incentivize adoptions for older youth, while deeply cutting other social services, including subsidized child care, early learning and temporary cash assistance to needy families.

The House’s more generous child-welfare spending package would be made possible by a four-year, $8 billion revenue plan that includes an increase in the real estate excise tax on home sales of more than $1 million, a capital gains tax and a restructuring of business taxes.

Reluctant to raise taxes, Senate Republicans have instead focused on funding K–12 education to satisfy the state Supreme Court’s McCleary decision, necessitating cuts elsewhere across the budget. The regular legislative session closed Sunday with lawmakers still squabbling over how to move forward on budget talks.

With foster children being put up in hotels, bounced between short-term placements and even sent out of state, both Republican and Democratic lawmakers say they want to take action this year. But closing the mammoth gap in their proposals could squeeze out any new child welfare spending. And a budget impasse could derail efforts to reform the system under a new, consolidated Department of Children, Youth and Families. Without major investments and a commitment to reforming the child welfare system, some say it faces collapse.

InvestigateWest, in partnership with Crosscut and KCTS 9, has shed light on the shortcomings in the state’s foster care system with a series of reports that began last September.

Republicans and Democrats take a dim view of each other’s approach to the state’s foster care crisis.

“The Senate budget is willfully malicious,” said Rep. Timm Ormsby, the Spokane Democrat charged with writing the House budget. “They have very little regard for many of our really struggling folks, and that includes youngsters that are literally the children of the state.”

House Democrats “have $8 billion more to spend than we do, so they avoid hard choices that we have to make,” said Sen. John Braun, a Centralia Republican and the Senate’s chief budget-writer. “And yet they refuse to vote on the taxes that they say will provide this $8 billion more dollars.” 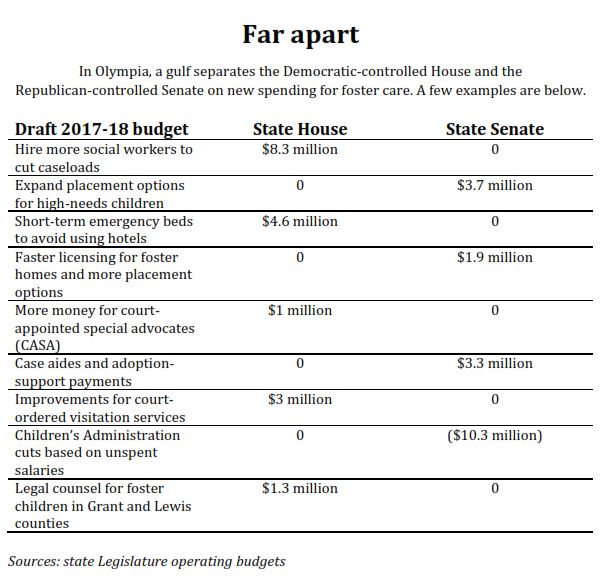 Under the House plan, the Children’s Administration, which oversees the state’s foster care system, would get an extra $26 million added to its $1.2 billion budget. As part of that increase, the agency would add enough social workers to get caseloads down to 18 per worker, which still exceeds the recommended 15-case maximum.

The Senate budget makes a net $3 million trim to the Children’s Administration, even after adding funds for several efforts to support foster parents, speed foster parent licensing and encourage adoptions.

The Children’s Administration today operates with fewer workers and lower inflation-adjusted funding than it did before the Great Recession, when the Legislature cut the foster care budget by nearly one-quarter. The agency and advocates say that those shortfalls have led to a sharp drop in available foster homes and other placement options, especially for youth with serious mental health and behavioral problems. The current epidemic of opioid addiction has only put more strain on the system.

Recognizing the crisis, Senate Republicans decided to focus their efforts on recruiting and retaining foster parents. They passed a bill (SB 5890) that would provide foster parents with aides who can watch a child for a few hours, help with laundry and provide other tangible relief. The bill would also increase ongoing support payments to adoptive parents, and would make relatives of foster children eligible for cash assistance to care for them, regardless of their means. The House is now working on amendments to the bill, and leaders there say they might take the opportunity to add select provisions.

“We really can’t wait another session to provide some tangible support” to foster parents and relative caregivers, said the bill’s prime sponsor, Sen. Steve O’Ban, a University Place Republican who chairs the Senate Human Services, Mental Health & Housing Committee. “We’ve got to do something to shore them up, because we really can’t do this responsibly without them.”

The Senate’s foster care bill will help some foster kids and families, said Sen. Christine Rolfes, a Kitsap Democrat who co-sponsored the bill and is on the Ways & Means Committee. But “without the resources to start building back the system, SB 5890 is just a Band-Aid,” Rolfes said. “It’s something that legislators will go home and brag about while we still have a system that’s collapsing on itself.”

Social worker salaries are another major point of contention between the parties. The House plan includes a 16 percent social worker salary increase that Gov. Jay Inslee negotiated last year. The Senate budget instead offers a $500 increase in each of the next two years for all state workers. That’s less than 3 percent of social workers’ starting salary of around $34,000.

Case workers say the higher raises are a first step in recruiting and retaining qualified workers, who often stay at the Children’s Administration for less than a year before fleeing to better-paid jobs in hospitals and other less stressful settings. The high turnover is a major source of frustration for foster parents, who complain that they feel unsupported by workers carrying 20 or more cases. The state workers union, as well as some advocates and legislators, say the pay bump needs to be at least 25 percent to make social worker salaries competitive. 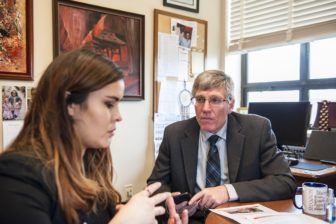 Ormsby, the Democratic House budget lead, called the Senate’s $1,000 raise a “crappy increase” that amounts to just 25 cents an hour. “It just demonstrates that the Republican Senate is not interested in being a decent employer,” he said.

The turnover issues at the Children’s Administration are not entirely salary-related, Braun, the Republican Senate budget writer, contends. “There’s an environmental and cultural problem at Children’s that’s hard to fix, that is not directly related to the salaries.”

Improving the culture and accountability of the agency was one of the motivations behind a proposal to consolidate child welfare, early learning and juvenile justice programs under a new Department of Children, Youth and Families, a move that has garnered broad bipartisan support but which the Senate has yet to approve.

A bipartisan panel convened by Inslee unanimously recommended the change last year, and the House passed a bill (HB 1661) to create the new department. Even though the Senate failed to pass the bill before the session cutoff and did not include any funding for the new department in its budget, lawmakers continue to negotiate on the bill.

Braun called the new department “a well-intentioned idea,” but said he’s concerned that the costs will be higher than anticipated and that the reorganization will “move around the deck chairs” without actually helping kids. But Senate Republicans remain open to discussing the new department, he said.

“I think there’s a lot of room for us to come to agreement on something that is a very positive step forward,” said Rep. Ruth Kagi, the Seattle Democrat who chairs the House Early Learning & Human Services Committee. “And obviously the new department is a critical piece of that as well. Because it’s not just financing foster care, it’s reforming foster care.”

This reporting was supported by InvestigateWest donors, the Fund for Investigative Journalism, the Satterberg Foundation  and the Thomas V. Giddens, Jr., Foundation.