Oregon’s driving restriction forces some to improvise and pray

Jaime Miranda saw business cut in half at M&M Marketplace, his Latino-themed bazaar in Hillsboro, after a 2008 state law required applicants to prove they are in the country legally to get a license. Many Latino vendors selling at the bazaar pulled out, unable to drive legally or attract enough customers.

For Ezequiel Escobedo, who runs a Woodburn grocery, the 2008 law prompted him to launch a delivery service for Latino clients who don’t have a license.

For Delfina, a mother of two in Hillsboro, the law means not driving to the river during summer vacation, even on the hottest of days. “We never leave. Only when we have to for work,” she said. “We don’t want to get pulled over.”

For Sergio, an 18-year resident who raised his kids in Washington County, it meant changing his legal address to one in Vancouver, Washington, so he could have a legal license to continue his construction work. (Washington is one of five states that do not require proof of legal presence to get a license.)

For Juan, a landscaper in Eugene, it means hiring someone else to drive his truck until his son, a U.S. citizen, turns 16 and can get a license of his own.

For Maria, a waitress in Woodburn, it means paying one of the city’s legally licensed Latino drivers for an informal taxi ride.

Other people drive illegally. And they get caught. 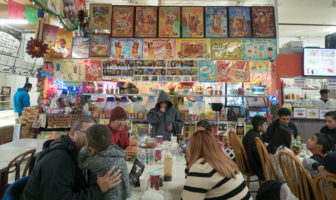 The dining area of the M&M Marketplace in Hillsboro. Photo by Kate Willson.

Mariana left Mexico at 17. She married a Mexican man, who, like her, entered the country illegally. They raised three kids and sent them to Salem schools, and work in the fields and vineyards of rural Marion County. Sometimes they drive their kids to school when the weather is bad, or to the doctor. Necessities, they say, not frivolities.

They renew their car insurance, obtained when they had licenses, because something is better than nothing if they get stopped by police.

“Every time we get in the car, we make it a habit to cross ourselves,” Mariana said, adding that she’s told her kids about the situation. “I explain that, ‘We’re going to get on the road and your mom doesn’t have a license, and we pray that God will protect us. Because if police stop us, they could give me a ticket, or who knows.’ ”

Mariana, 34, was alone in the car on a Monday afternoon in early July when she came to an intersection behind a strip mall in east Salem, just as a patrol car approached on the through street. “The other street didn’t have a stop sign. A patrol car came. He didn’t have to stop,” she said. “So I stopped, what I thought was a normal stop. I noticed he didn’t go. And my nerves started. I thought, ‘He’s looking at me. He’s going to stop me.’ ”

The officer wouldn’t continue through the intersection, Mariana said, so she continued. “He followed me and stopped me,” she said.

Mariana said the officer told her that her tires crossed the white line delineating the stop. He gave her a warning for her faulty stop and a $260 ticket for driving without a license.

Salem doesn’t collect demographics of people who officers stop, which might lend credence to Mariana’s suspicions that police target her and other Latino drivers. But Salem police spokesman Lt. Dave Okada said they are willing to listen to concerns, explain procedures and take formal complaints.

Mariana feared contesting the ticket might somehow lead to deportation. So she pleaded guilty, and began making payments on the $260 fine.

“For me it was unjust,” she said. “He stopped me because he wanted to. Not because I did something wrong.”

This article has been modified from its original version to clarify citizenship requirements for those seeking Oregon driver’s licenses.