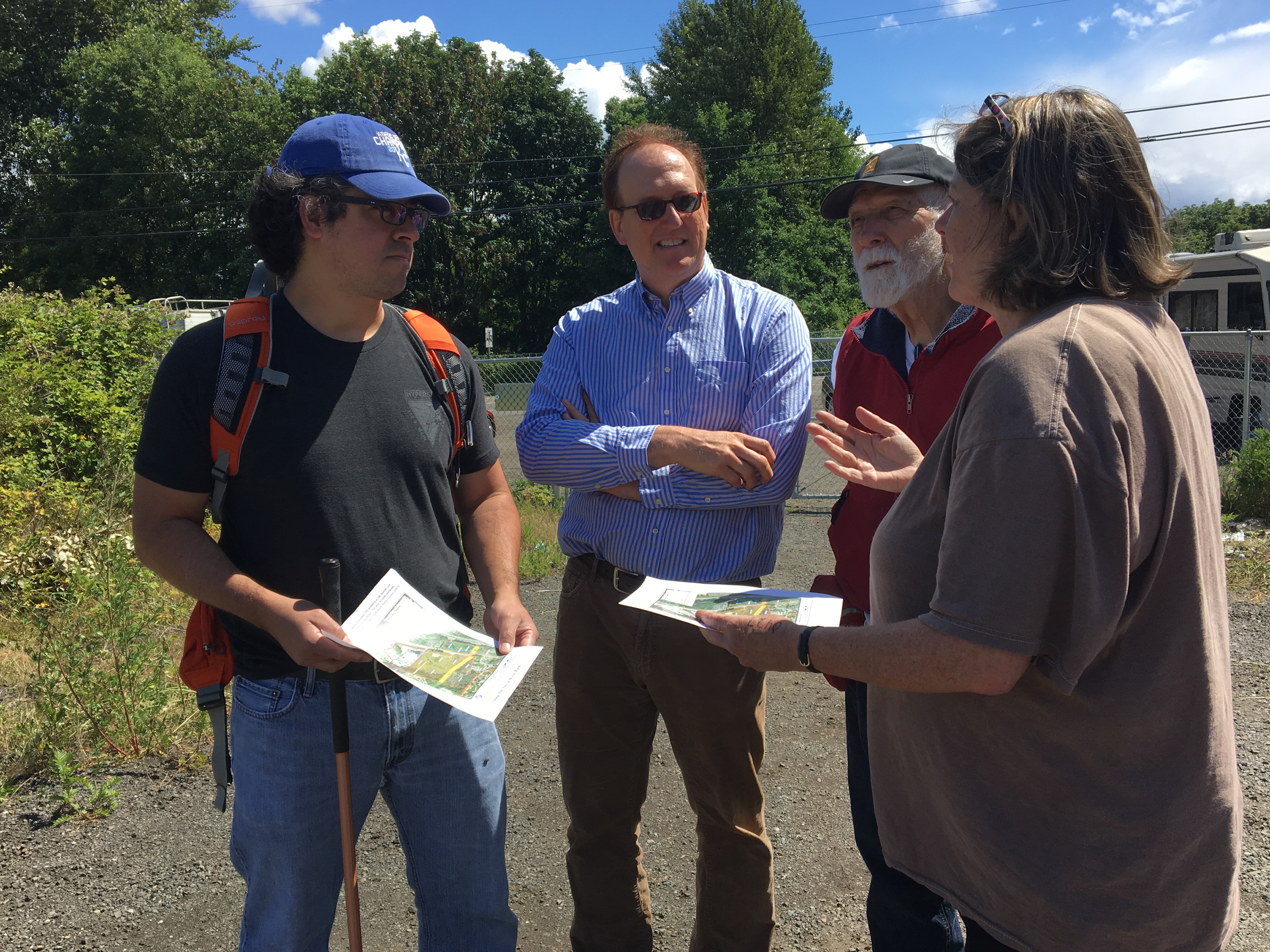 Open space advocates and a city official walk through the Myers Way parcels together. From left to right: Hugo Alamillo of North Seattle College’s Biology Department, Daniel Bretzke of the city of Seattle’s Facilities and Administrative Services Department, John Barber of Parks and Open Space Advocates, and Cass Turnbull of TreePAC.

The city of Seattle will retain the largest piece of undeveloped land in its inventory for open space rather than selling it off, Mayor Ed Murray has decided. The move drew praise from open-space advocates and neighbors of the acreage in West Seattle.

“This is a big win for clean air and clean water and public health,” said Mary Fleck, co-chair of the Seattle Green Spaces Coalition.

Murray’s announcement late Wednesday means that 29 acres of the land, known as the Myers Parcels, will stay in city control and be “land-banked” until the Parks Department decides how to use it. The plan to use about 4 1/2 acres of the land to expand an adjacent city-run firefighter training facility will continue to move forward.

Last fall Murray, with approval from the City Council, had earmarked $5 million from the sale of the Myers Parcels to aid in the city’s response to the homelessness crisis, for which the Mayor had declared a state of emergency. If sold, the land likely would have become an industrial development. The city previously tried to sell it to Lowe’s, but the deal fell through.

Community members and open-space advocates spent months arguing that the city consider other uses for the land. At a public meeting late last month, residents repeatedly criticized what they called a lack of community engagement in deciding the fate of the land.

The Myers Parcels serve as a natural buffer to pollution between the industrialized Duwamish River Valley, where hospitalization rates for asthma are high and residents are likely to live sicker and die younger than elsewhere in the city, and the West Seattle residential neighborhoods of Top Hat, Highland Park, South Park, and Arbor Heights. Local residents joined City Council Member Lisa Herbold, who represents West Seattle, in raising concerns about how the development of the property could further degrading air and water quality in the area.

Herbold, who has been a champion of maintaining the site as an open space, wrote a letter to Murray advocating for better community engagement and for valuing the public-health benefits of the land. She also toured the property with concerned citizens, which Fleck says made a big difference in helping the community come together.

Herbold released a statement after the mayor’s announcement calling the decision “a significant and important victory for the community.”

“Extensive public input” helped sway Murray, said Will Lemke, a spokesman for the mayor.  “Folks had been telling us their opinions on the matter for some time.  …  They were all very legitimate concerns.”

The land will be transferred to the parks department, protecting the property from development until the city conducts further outreach to help determine what will become of it. In Wednesday’s announcement, Murray said it would be used for “open space and/or recreational purposes.”

Lemke said the mayor is confident he can find another source for the $5 million in homeless aid when the city adopts a 2017 budget this fall.

One of the leading open-space advocates in the debate was Cass Turnbull of TreePAC, an environmental advocacy group. She praised Murray’s decision, saying, “I think the mayor is starting to recognize the values of open space and how they can serve the environmental justice movement and also the people of Seattle coping with the effects of increased density.”