OLYMPIA — Swooning gas prices are a boon for consumers but they’re creating a huge shortfall in state tax collections used to clean up hazardous waste dumps, prevent pollution and give citizens a voice in chemical-waste cleanups.

“We’re very worried,” lobbyist Doug Levy, representing the cities of Everett and Puyallup, told the Senate Ways and Means Committee this week as it took up a bill (SB 6660) to partially make up the shortfall.

The problem is that when gas prices drop, so do state collections of a tax on oil and other chemicals designed to help protect people from hazardous chemicals.

The result of $2-a-gallon gas: a big slowdown in cleanups of toxic waste dumps and of stormwater, the pollution-laced rainwater runoff that is the biggest source of toxics in Puget Sound and many other waterways. The bill considered by the Senate committee would boost the hazardous substances tax from 70 cents per $100 worth of chemicals imported to 90 cents per $100.

“There’s a significant problem to work through,” Levy told the committee. “We’re very worried about the at-risk place we find some of these (toxic cleanup) projects now. … We think this type of bill is very important to try and stabilize this account, which does a lot of great things on the ground.” 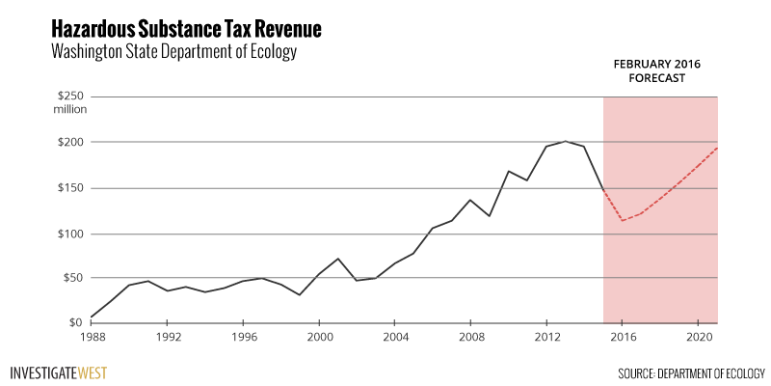 The state-run account provides money to clean up thousands of toxic waste sites and funds programs aimed at heading off pollution before it occurs through efforts to inform consumers.

The money to stop pollution before it happens is what’s at issue as the Legislature fashions a state budget. Senate Republicans and the oil industry want to tamp down ambitions for the program and stick to cleaning up toxic dump sites. House Democrats and environmentalists are scrambling to defend broader uses of the money that they say can empower the public to take action and prevent future waste sites from being created.

Low gas prices mean that instead of generating $324 million for the 2015-17 biennium, which legislators expected when they adopted the two-year budget last spring, the tax will bring in just $234 million, according to the latest forecast.

Environmentalists and lobbyists for cities and counties are behind the bill to raise the tax. And for a time it appeared the measure might even have a chance of passing the Republican-controlled Senate, because it was co-sponsored by several Republicans including Sen. Doug Ericksen, R-Ferndale, chairman of the Senate committee that handles environmental legislation. Ericksen’s district includes oil refineries and he is close to the oil industry.

But Ericksen on Wednesday told InvestigateWest he would not support a tax increase as high as the bill advocates, and would consider a tax increase only if separate legislation directs that the money be used solely for toxic dump site cleanups. Much of the revenue currently raised is instead devoted to intercepting and cleansing stormwater. Some also pays for related purposes, including “public participation grants” to ensure that the public has a say in toxic site cleanup plans.

“We need to go back and fundamentally rethink how we use MTCA dollars,” Ericksen said in an interview. “MTCA goes into a thousand different places and it’s a slush fund.”

Ericksen this year filed legislation (SB 6570) to limit use of the tax proceeds for toxic cleanups. But he is no longer actively pursuing it because the Senate’s Republican leadership enshrined the same idea in a budget proposal this week. That will have to be negotiated with the Democratic-controlled House and Democratic Gov. Jay Inslee.

When voters in 1988 passed an initiative to impose the hazardous-substances tax, it was “to raise sufficient funds to clean up all hazardous waste sites and to prevent the creation of future hazards due to improper disposal of toxic wastes into the state’s land and waters.”

The oil industry says voters intended for the money to go to toxic-waste cleanups. The oil lobby faults the Legislature for allowing revenues from the tax to be used for other purposes. Western States Petroleum Association lobbyist Greg Hanon ticked off a list of expenditures he considers unrelated to the original purpose of the tax. Those include soil remediation, removal of polluting woodstoves, reducing diesel pollution, beverage recycling at sports events, a nature trail made from recycled plastic, natural yard care programs and even Christmas tree recycling.

“We have as much resources in this account for the original purposes of the program, we have just lost our way in how many things are funded out of this account,” Hanon argued to the Senate committee.

And in an interview with InvestigateWest, WSPA regional director Frank Holmes said raising the tax on oil imports is not right after the Legislature previously diverted so much of the money to other purposes.

“When prices were on the uptick, (the tax) generated more money and, unfortunately, rather than using the money for its intended purpose, it was funneled off,” Holmes said.

Representatives of the Department of Ecology, which administers much of the use of the tax revenue, say the oil industry and Ericksen have it wrong when they say the 1988 initiative passed by voters was solely meant to clean up toxic waste dumps.

Denise Clifford, Ecology’s chief lobbyist, said the department continues to advocate that approach. But the Inslee administration is listening to all the legislators’ ideas, she said.

“We want to see some kind of solution so we don’t keep getting deeper in the hole,” Clifford said in an interview.

How might it play out on the ground if legislators and the governor cannot agree on a solution? One way is the cutting of the public-participation grants targeted by Ericksen and the oil industry.

The Duwamish River Cleanup Coalition would be one of the casualties. The coalition, which represents environmental, tribal, small-business and neighborhood groups monitoring the cleanup of the Seattle river, gets one-fifth of its budget from the threatened public-participation grants. Ecology has notified the group that, in anticipation of the shortfall, it won’t be getting that money for the state fiscal year starting July 1, said James Rasmussen, coordinator of the coalition, who testified before the Senate committee. The four-person nonprofit is starting to make plans to reduce its payroll, Rasmussen said.

In the case of the Duwamish, one of the largest cleanups in the state, past MTCA funding has been vitally important to local activists: The cleanup coalition successfully argued for additional removal of toxic dirt and mud from the river bottom. That happens a lot with public-participation grants, Rasmussen said.

With neighbors and other interested members of the public formally brought into the process with a group to advocate for them, “it makes for better decisions,” Rasmussen said. “Those (cleanup) plans have become better every time it’s happened.”

Robert is co-founder and executive editor of InvestigateWest. At the Seattle Post-Intelligencer, Robert exposed a major weakness in the Endangered Species Act and deficiencies in Puget Sound restoration efforts. His reporting on hard-rock mining won the John B. Oakes Award for Distinguished Environmental Journalism. A longtime former board member of the Society of Environmental Journalists, he currently serves as chair of the editorial board of SEJournal. Seattle Magazine in 2013 chose him as one of Seattle's "most influential" people.