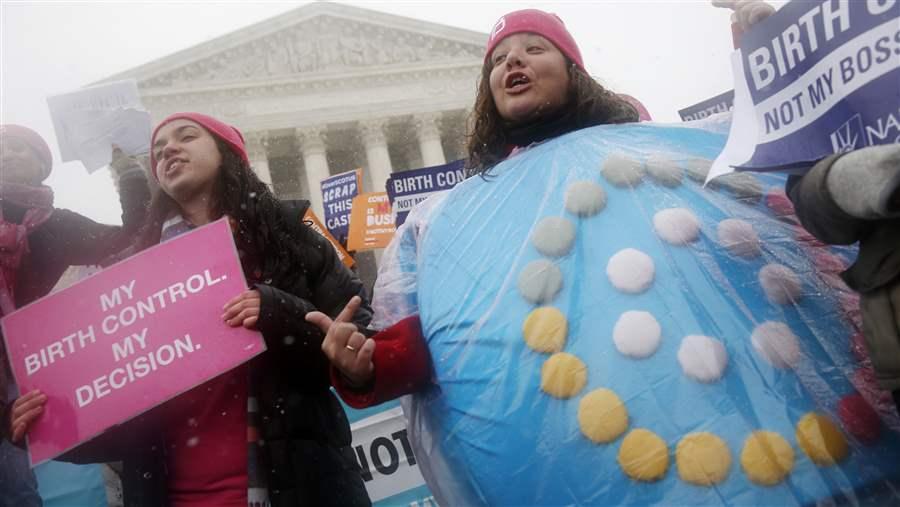 Since January, Charley McGrady has been doling out hormonal contraceptive pills and patches to women who come to her Eugene, Oregon, pharmacy without a doctor’s prescription for birth control.

A new state law allows McGrady to consult women about pregnancy prevention and write prescriptions for contraceptives that previously required a doctor’s signature.

Oregon’s move to pharmacist-prescribed birth control is an attempt to increase access to the drugs and reduce unintended pregnancies, which make up more than half of all pregnancies in the United States. It also is part of a movement toward team-based medical care, in which doctors and other medical professionals together oversee patients’ care.

California pharmacists will begin writing their own prescriptions for birth control next month, and lawmakers in Hawaii, Missouri, South Carolina, Tennessee and Washington are considering legislation that would give pharmacists the power to prescribe contraceptives.

Pharmacists in several states already can prescribe certain drugs under the supervision of a physician, but laws like those in Oregon and California give them autonomy to prescribe contraceptives on their own after completing a training course.

The California law is more expansive than Oregon’s. It allows pharmacists to prescribe a vaginal ring and hormonal birth control shots in addition to pills and patches that release hormones through the skin. In California, where about half of pregnancies are unplanned, the law also lets them furnish contraceptives to women under 18. (In Oregon, only pharmacists working directly with a physician can prescribe to women who are under 18.)

McGrady said she has consulted with 13 patients about birth control at her Safeway pharmacy since the law took effect at the start of the year. She filled prescriptions for 11 of them and referred the remaining two to doctors for further evaluation.

“They seem to be between insurance, maybe between doctors [or] they just moved here,” she said of the women who have come to see her. “But they have the resources to purchase their birth control.”

To get a prescription for hormonal birth control, which most commonly uses a combination of estrogen and progestin to prevent ovulation, a woman typically must visit a doctor or clinic.

Sometimes those visits also include pelvic exams or pap smears that have no medical bearing on whether a woman can get a prescription for birth control, said Paige Clark, a pharmacist with Oregon State University (OSU) College of Pharmacy. Uncoupling the exams from prescriptions improves access to the contraceptives, she said.

Visiting a doctor for a prescription can be difficult for many women because they lack health insurance to cover the visit, cannot take time off work for an appointment, or have trouble finding a doctor with an opening to see them, Clark said.

Getting birth control from pharmacies could be easier because they can accommodate walk-in patients and are usually centrally located in communities — 93 percent of Americans live within five miles of a pharmacy.

“This is really about not putting any barriers between the patient and their direct access to birth control,” Clark said.

So far 250 of Oregon’s roughly 3,800 pharmacists have completed the OSU-run training and can prescribe birth control, though more are signing up every day and Clark expects to have more than 1,000 pharmacists certified by June.

It is too early to know if the program is reducing unplanned pregnancy. But Clark reports that, anecdotally, more than 90 percent of patients seen by the newly trained pharmacists are receiving prescriptions for birth control. Others are referred to physicians.

Hormonal birth control is one of the most popular ways women prevent pregnancy in the United States. In 2012, 26 percent of women using contraception were taking the pill, according to the Guttmacher Institute, a nonprofit focused on sexual and reproductive health.

But studies show restricted access to the pill and other prescription methods deter women from consistently and effectively using birth control. Groups like the American Congress of Obstetricians and Gynecologists and the Oral Contraceptives Over-the-Counter Working Group argue that while prescriptions from pharmacists are a step in the right direction, they’re not truly removing a barrier to contraception.

“This replaces one gatekeeper, the physician, with another gatekeeper, the pharmacist,” said Daniel Grossman, an obstetrics and gynecology professor at the University of California at San Francisco and a member of the Working Group.

Instead, these groups say birth control should be available over the counter, without a prescription, much the way emergency contraception — a progestin pill that can be taken shortly after intercourse to prevent pregnancy — is now.

Moving to an over-the-counter hormonal birth control option would most likely require drug companies to petition the U.S. Food and Drug Administration for approval.

Because hormonal birth control isn’t addictive and doesn’t pose a risk of overdose, it already meets the standards the FDA uses to evaluate whether a drug can be sold over the counter, Grossman said. It also fulfills the FDA requirement that patients be able to identify the need for the medicine and take it appropriately, he said.

“It’s a lot safer than older products that have been over-the-counter for a long time like Tylenol, which does have a serious risk if you take too much of it,” he said.

There is no federal way to give prescribing power to pharmacists in all states, so over-the-counter access is the best option for making sure all women who want hormonal contraceptives can get them, Grossman said.

Hormonal contraceptives can put some women, typically those with high blood pressure or other vascular conditions, at higher risk for strokes and blood clots.

Advocates for over-the-counter birth control say women can typically identify for themselves whether they are at risk based on medical history and a simple blood pressure check. But not everyone agrees.

Donna Harrison, a physician and director of the American Association of Pro-Life Obstetricians and Gynecologists, said unchecked access to birth control could be detrimental to some women, including teens.

Harrison’s group doesn’t take a formal position on pharmacist-prescribed birth control. But she said interaction with a pharmacist wouldn’t be enough support for sexually active teenage girls, who need physicians to examine them and advocate for them.

Roger Martin, a lobbyist for the Oregon Catholic Conference, said he worried the Oregon bill did not do enough to protect pharmacists’ right to refuse to supply birth control.

He testified against the bill before the Oregon Senate Rules Committee last summer.

Steven Dickerson, an anesthesiologist and Republican state senator sponsoring the Tennessee legislation, said his bill has limited opposition, though lawmakers were not quick to coalesce around the idea.

“We’re a pretty conservative state,” he said. “So it’s a discussion that I think a lot of folks shied away from.”

Thirty-seven percent of Tennessee voters say more access to birth control would help reduce abortion, a January poll conducted by Middle Tennessee State University indicates. That number rises to 61 percent among those who consider themselves supportive of abortion rights.

The move toward pharmacists prescribing birth control is part of a larger trend toward team-based health care in which doctors and other medical professionals work together to oversee a patient’s care, said Stacie Maass, with the American Pharmacists Association.

Pharmacists in most states can already make changes to a patient’s medications and in some they can issue prescriptions under collaborative agreements with doctors. In California, pharmacists can prescribe smoking cessation products and, as in at least 10 other states, pharmacists can provide Naloxone, a drug used to reverse overdoses from heroin and other opioids.

Last year the National Governors Association issued a report encouraging states to address challenges faced by pharmacists, including state restrictions that limit how they collaborate with doctors and how they receive reimbursement for patient care services.

“Pharmacists are in the community, they work with other health care providers,” Maass said. “This is really about convenience and accessibility for the patient.”

This article was first published at Stateline, an initiative of The Pew Charitable Trusts.