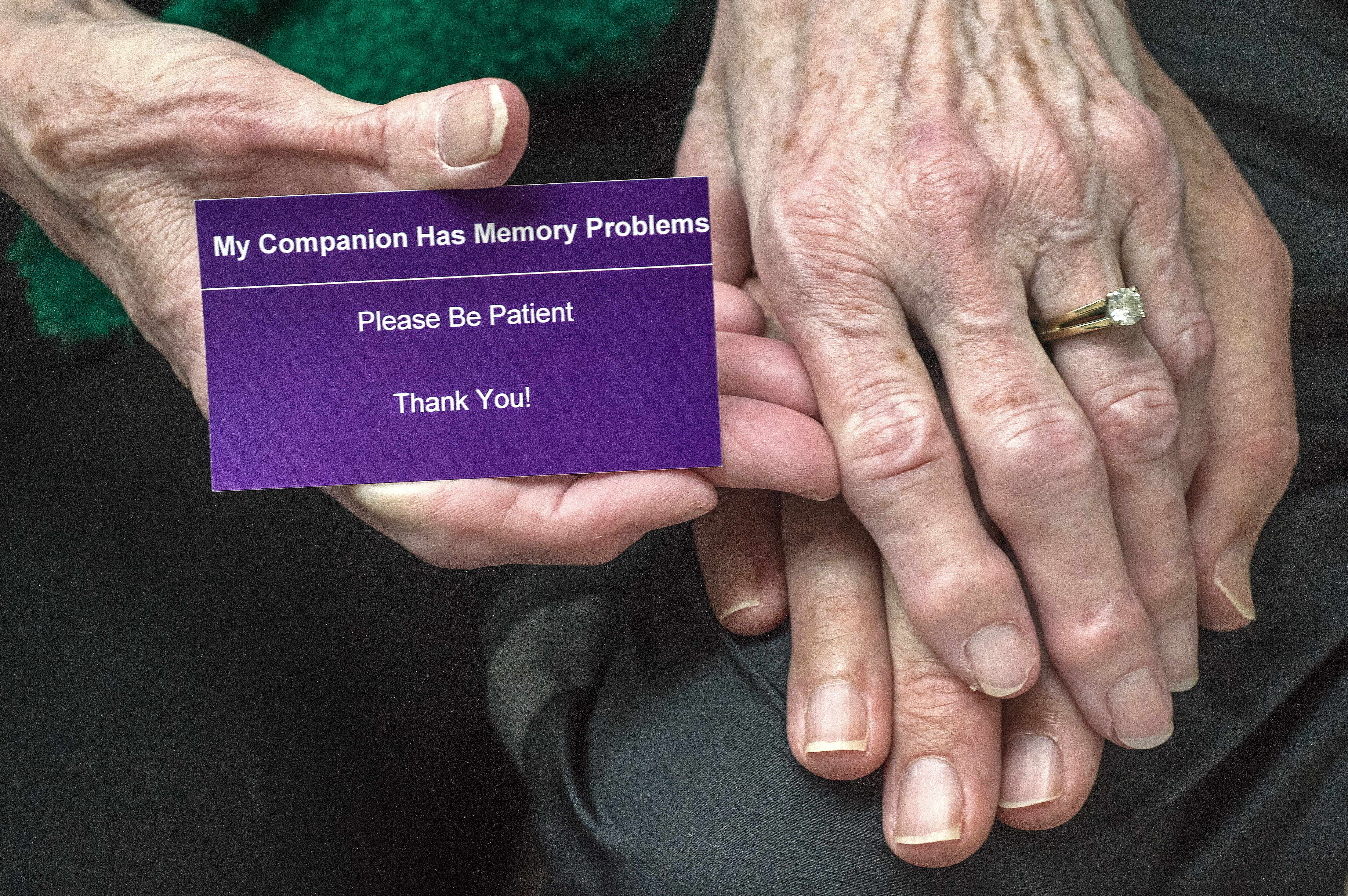 By Allegra AbramoFebruary 11, 2016No Comments

Like many people caring for someone with dementia, Madeleine Fraley often found herself awkwardly trying to explain why her husband, Larry, couldn’t answer questions or would act peculiarly.

Sometimes Larry would cut in line at a store, to the consternation of people in front of him. Or he would follow service people working on their house in Port Orchard, asking questions or telling them to leave. Then there was the time he decided to hitchhike to the Kingdome — years after it had been demolished.

We are crowdfunding Olympia news and can reach 50 percent of our goal TODAY.
Back the project on Beacon Reader »

But explaining these occasional incidents in public sometimes meant embarrassing Larry. Fraley had an idea: Why not create a simple card explaining the situation that she could discretely hand to restaurant servers, the plumber and others she and Larry encountered? So she devised a purple-hued card the size of a business card that states, “My companion has memory problems. Please be patient. Thank you!” 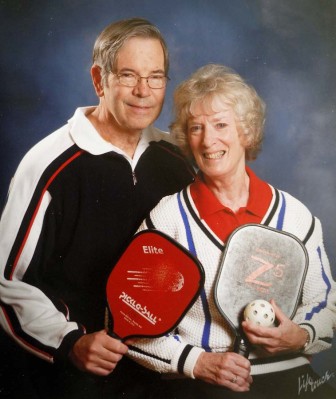 The legislation (HB 2835) directs the Department of Social and Health Services to develop a purple card asking recipients to be accommodating to the person with dementia. The department also would promote the card among first responders, businesses and the general public. An amended bill passed the House Health Care & Wellness Committee last week, and proponents say they are hopeful the full House will vote on the legislation by Feb. 17, the deadline for legislation to pass at least one legislative chamber.

The bill rolls the purple card into work on a new state plan to address the growing burden of Alzheimer’s disease and other forms of dementia, which now affect more than 100,000 people in Washington — about one of every 66 people in the state. Gov. Jay Inslee on Friday is scheduled to help launch the state Alzheimer’s plan, which was authorized by 2014 legislation and released Jan. 1.

Groups around the state have occasionally created similar cards, according to advocates, but the legislation aims to establish one card that will be widely recognized. “I want it to be universal, statewide, where you don’t even have to read the card anymore, you just see the purple,” Fraley said.

The purple card dovetails with the goals of the state plan, which include reducing the stigma surrounding dementia, said Bob LeRoy, executive director of the Alzheimer’s Association Washington State Chapter. Purple is the national group’s color.

“Every time someone is willing to be open and honest about the disease, and out and active in the community, you know, it erodes a little bit of the stigma that may exist,” LeRoy said.

As the proportion of Americans 65 and older grows, so too will the number of people living with one or more forms of dementia, which includes Alzheimer’s disease and dozens of other disorders affecting brain function. By 2040, an estimated 270,000 people in Washington will be living with dementia, according to the state Alzheimer’s plan. At the same time, more people are remaining in their homes longer as they age instead of entering long-term care facilities, making people with dementia more visible in their communities.

For the growing number of people with dementia and their caregivers, the flash of a purple card could ease interactions not only at the grocery store or bank, but also with first responders, law enforcement and security personnel. Transportation Security Administration agents, for example, are having so many challenges getting people with various forms of cognitive impairment through airport security that they asked the Alzheimer’s Association for training, LeRoy said. 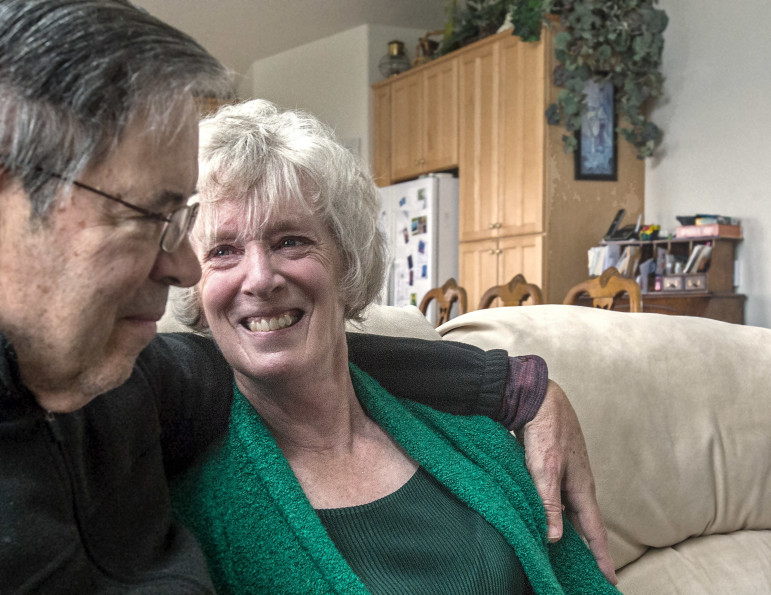 House Bill 2835 would task DSHS to develop a “purple card” as part of the state’s Alzheimer’s plan.

South Kitsap Fire and Rescue Battalion Chief Mike Wernet, who gave Fraley some early feedback on her idea for the card, said it could help emergency medical responders interact more effectively with patients with dementia.

“We think the cards are a great idea,” said Wernet, who has watched family members and colleagues struggle with dementia. “And when they hand them to my crews, hopefully my crews will look at that and say, ‘OK, I need to be more patient, I need to be slower, I need to be more articulate, I need to maybe ask the family questions, versus the patient, so I can get some correct answers.’”

One concern about the use of such a card to identify people with dementia is that it could make them more vulnerable to exploitation. Rep. Steve Tharinger, D–Sequim, the bill’s sponsor, introduced an amendment directing the state Alzheimer’s plan advisory group to examine the risk of exploitation and possible privacy concerns arising from use of the card.

“So we need to step back a little bit, and just make sure this is well thought out, and we don’t cause any problems for folks,” said Tharinger, who serves on the state plan advisory group.

We need five new backers TODAY to crowdfund  reporting from Olympia.
Back the project on Beacon Reader »

Tharinger said he learned about the idea for the purple card from Fraley’s brother, Gary Smith, a longtime lobbyist with the Independent Business Association of Washington. Smith has taken the lead in shepherding the legislation through Olympia. The original bill called for creating a new advisory committee to oversee development of the purple card, but Smith said he agrees with folding the effort into the state plan, which cuts costs and increases the bill’s chance of passing.

For Fraley, the purple card is one small tool in her effort to maintain the dignity and quality of life of her husband of almost 53 years. “The longer we can keep our loved ones in our homes, in our communities, the better off they are,” Fraley said. The card is “such a simple idea, and I just have it my heart that I know it will help others as they move through the community.”

Department of Social and Health Services