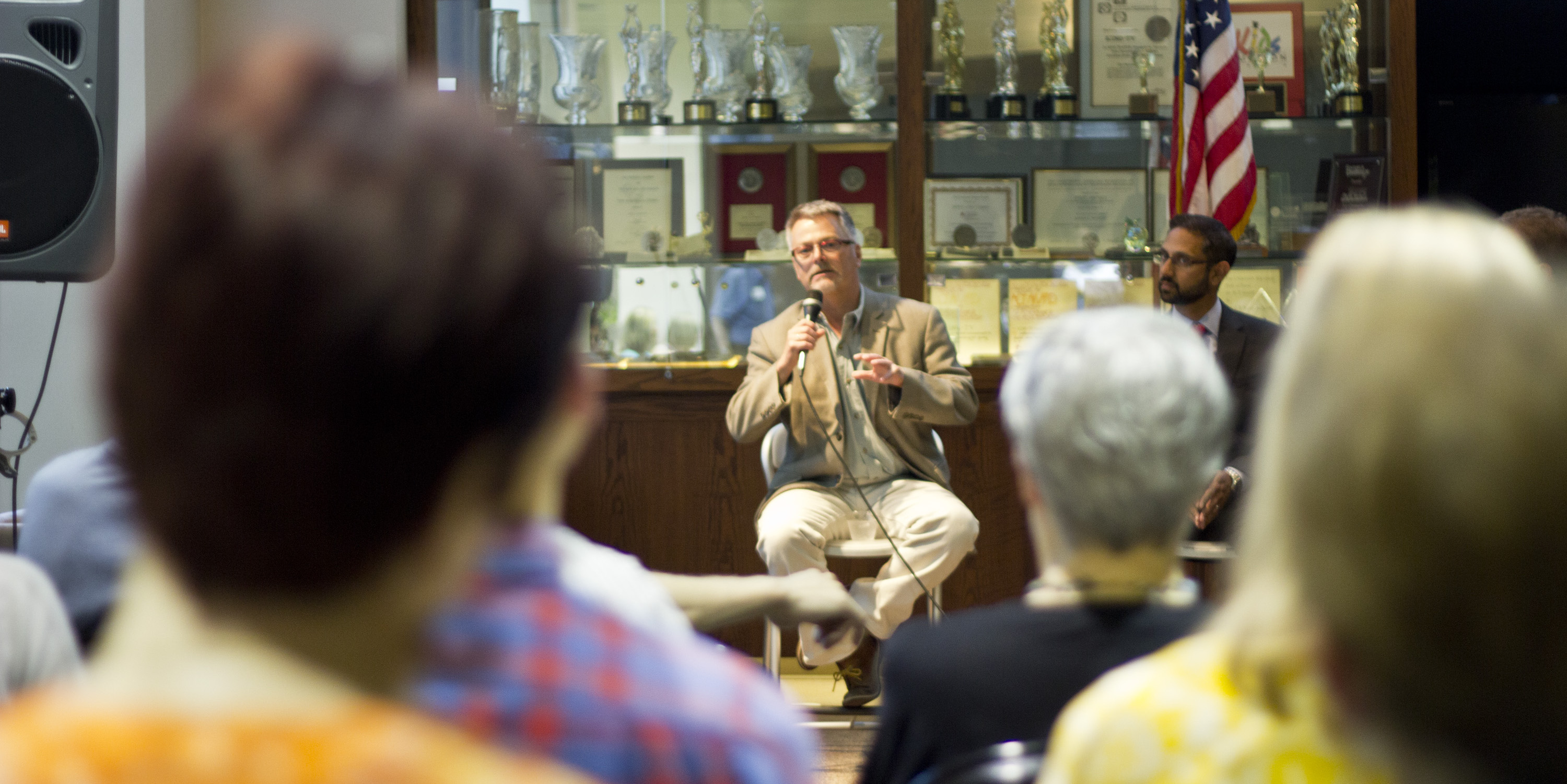 States are the new front lines for big political spending. In a fault-line shift, more money than ever is being poured into even the smallest local races. In Washington, where voters more than 40 years ago created a public agency to oversee campaign spending but lawmakers have consistently underfunded it, the deluge of money is overwhelming those whose job it is to help prevent public corruption.

That was the key message delivered by special guests Edwin Bender and Amit Ramade at InvestigateWest’s Sixth Anniversary Celebration in Seattle.

Bender is executive director of the award-winning national organization followthemoney.org, which promotes accountable democracy by collecting and reporting political spending data from all 50 states. Ramade is an attorney serving the last year of his term as a governor’s appointee to the state’s Public Disclosure Commission, or PDC.

The PDC oversees Washington campaign finance laws. Its purpose? “To make sure that organizations like Ed’s, all the journalists out there and indeed the inquiring public have access to information about who is running for office, how much they are getting in political support from anybody else, who’s lobbying our elected officials,” Ramade said. “I always think that the core mission of our organization is to help root out corruption and to prevent corruption.”

We’re seeing Super PACs down to the state level and even at the school board level. We are absolutely going to see a rise in money … [The PACs] are going after gubernatorial races because governors have such power; they are going to go after attorneys general because they are the guys who sue — or don’t sue in some cases —if there’s a law around, for example, environmental regulations… secretaries of state who control the voting systems and voter registrations… You’re going to see these big piles of cash come in very specific ways with a very strategic end in mind.

In May, PDC Executive Director Andrea Doyle resigned, citing her frustration with increased demands on the state agency even while its budget was being cut. McClure read from her resignation letter:

Antiquated technology, continuous growth in campaign spending and the related increase in complaints about illegal campaign activity, repeated attacks on the fundamental principles on our state’s award-winning public disclosure system and the understandable frustration of the voting public whose trust and confidence in the voting system is being tested on many levels.

Amit Ramade on the PDC budget and technology

Everyone on the Commission shares some of the frustration she expressed… What she said about antiquated technology I think it goes to a deeper problem. And that is as technology has evolved, it has become cheaper to disseminate information. The cost of saying something is almost zero now. And so what’s happened is that anybody can say anything at anytime… And the cost of providing or disseminating quality information has gone through the roof, relatively speaking. We’ve seen it in journalism. We’ve seen it in our newspapers. We at the PDC are suffering from the same thing in some sense. But the PDC budget has stayed the same — it was $1.99 million ten years ago and it’s $2.01 million today. That is not even keeping close to inflation let alone keeping up with the technology that has changed how people access information. It has not kept up with the massive influx of money that is coming into politics.

I’ve seen all kinds of ways that people try to get around the laws, the ways people attack candidates, we see it all the time. And I think it’s because the premium that perhaps used to be paid for quality information, for quality endorsements, just isn’t there anymore. And that is something that has to change… And we are sort of fighting with one hand tied behind our back. We haven’t even been able to keep up with staffing needs. We have three people on staff who are charged with enforcing the laws. So any time anybody complains, and we get a lot of complaints, those three staff people are charged with processing those complaints. People miss the filing deadline: one of the deadlines just came and went and there were 1,300 people who missed the deadline. Most of them will turn out to be just innocent mistakes. But we have 1,300 people we have to remind of this deadline. It’s a gargantuan task. It’s a very tiny staff. And they don’t get paid enough to do it, frankly.

Amit Ramade on the influx of money into campaigns

When there is more money flowing into the system, there are more places for that money to go to pay somebody to come up with some idea. So we have a lot of PACs that have formed. Think about how many initiatives there are. Think what it was like 10, 20, 30 years ago in terms of the volume of just the initiatives that we see on the ballot every year. Well, each one of those, with few exceptions, has a campaign for and a campaign against. And increasingly in the last few years a PAC or some other organization gets formed that isn’t a pro- or anti-campaign but is sitting there taking potshots and putting ads on TV for or against a particular initiative. Citizens United has had a profound effect on money and politics… In my observation it opened the floodgates and it opened it to anybody in virtually unlimited number of ways, which means here we have a set of [public disclosure] laws that weren’t designed, weren’t enacted, with what’s happening today in mind. And an agency that hasn’t been allowed to grow and evolve to deal with both technology and influx of money that’s coming in. It’s real tough… Frankly it means some things don’t get enforced because we just can’t do it.

Ed Bender on what stories journalists are missing

Every state has different contribution limits. Very few people hit the contribution limits but people will give… the guys giving with a policy outcome in mind give strategically to incumbents first, their win rate tends to be in the 90th percentile so it’s an easy bet. So that’s the kind of thing our data can point [journalists] to. Guys who win, people who come back time and time again, look at the bills they are pushing through. The hardest piece is why? It often goes back to taxes, like business equipment tax exemptions things that are really hard to get at. But there are some real fundamental taxpayer issues that taxpayers should pay attention to, should know about but they can’t because they’re buried. The data leads you to a bill, leads you to who is benefiting. And those, I think are the big issues.

Amit Ramade on what stories journalists are missing

To do our job we need more resources.

Ed Bender on his ideas for reform

New York City has an ethics commission; they audit every campaign, every single filing. They also have a public funding mechanism that is a very robust system and rewards candidates for reaching out to small donors. The solutions to our problems are there but entrenched interests keep underfunding the disclosure rules… I think just getting to the point where citizens are understanding that there’s a reason why these agencies are underfunded is because… [candidates] want people to know the information as long as they are the challenger but as soon as they become the incumbent they want it all to go to silent.

Amit Ramade on his ideas for reform

Reform is a very complicated question. Yes, the PDC is significantly underfunded. The problem is that we’re just not important in the eyes of the legislature, not that they’re trying to punish us for regulating them… The other issue is that to the extent that there is a movement that is, from a policy perspective, attacking disclosure and contribution limit laws, that is happening but it’s happening in the courts. I will tell you that at any given time the PDC or the commissioners are defendants in pending litigation. There is a movement out there  — these organizations aren’t just working in the state of Washington. And I can’t say that I completely disagree with the view they’re advancing that the notion of contributing money is a way of expressing your political opinion. But where do we draw the line? When does a contribution go from being an expression to being undue influence? And who gets to draw that line? To whom do we give the deference to draw that line?  That’s where the battle is and I don’t really have an answer. We have to find a solution so that the big corporations don’t drown out individuals but at the same time there is a right of association and there is a right of expression and how do you find the right balance? That’s the challenge.

For clarity and length, portions of this dialogue have been paraphrased. The event took place at KING 5 Television on June 25, 2015.  You can read our story about the PDC budget and the 2015 Washington legislature here.