Even Republicans are recommending increases — just smaller increases than Democrats — in the operating budget, which simply keeps the lights on and basic government functions running. For now, decisions about larger ambitions such as reining in Puget Sound’s largest pollution source and funding new transportation projects are taking a back seat. It remains to be seen whether the Legislature will pass a capital budget and a transportation budget.

Exact operating budget figures remain a moving target. Republicans in charge of the Senate and House Democrats are trying to reach agreement on an overall budget by July 1 to avoid a state government shutdown. Despite the remaining differences, there is enough agreement in the spending plans to begin to rough out a picture of what the state’s operating budget for environmental agencies will look like when the dust settles in Olympia: 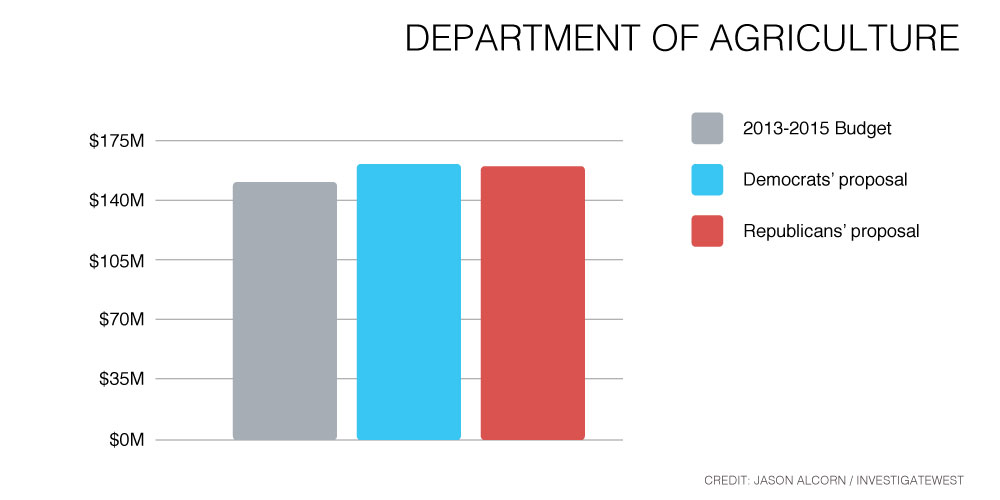 Department of Agriculture: This agency, which is responsible for protecting and promoting the state’s agricultural industry, will have an extra $4.8 million to $6.1 million to work with compared to the last two years. The House budget includes $164.9 million for the department, while the Senate’s includes $163.6 million.

Most of the boost is due to a federal funding increase of $3.4 million for the biennium for a program that provides grants for projects benefitting Washington’s specialty crops industries, including fruit and tree nuts. The House budget includes $1.6 million for emergency food assistance that is not in the Senate budget. 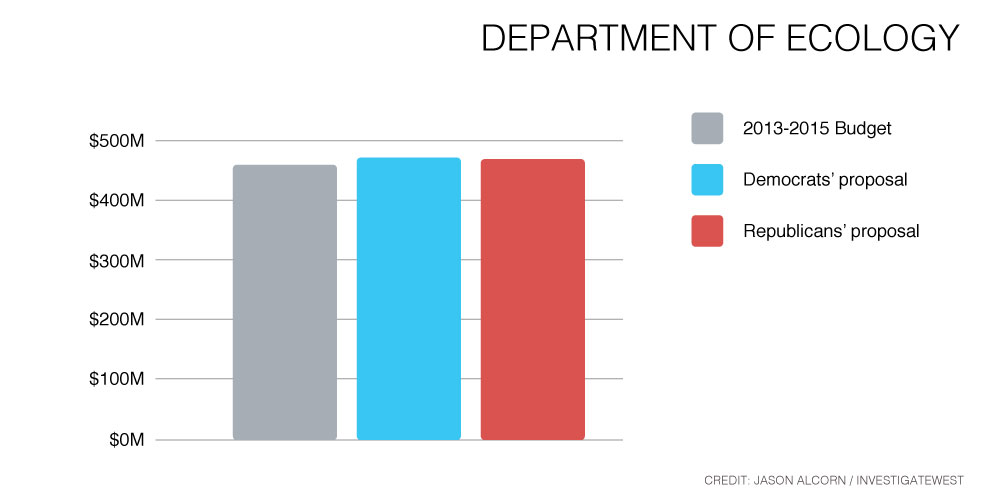 Department of Ecology: The state agency responsible for maintaining Washington’s environment and quality of life expects a boost of between $9.4 million and $11.9 million compared to the previous biennium’s funding, a 2 to 3 percent increase. The House is proposing $470 million for the department in the next two years while the Senate has penciled in $467.5 million.

Both proposals provide funding for some of the department’s requests, including more than $5.1 million for the state’s Regional Stormwater Monitoring Program to track stormwater pollution reduction efforts and $715,000 to enhance Ecology’s work on the Lower Duwamish Waterway Superfund site. The Senate proposal includes $5.9 million to implement a hazard materials bill related to oil spills that hasn’t yet passed. The House version includes more than $5 million to reduce oil spills and fund oil-spill-response equipment grants. 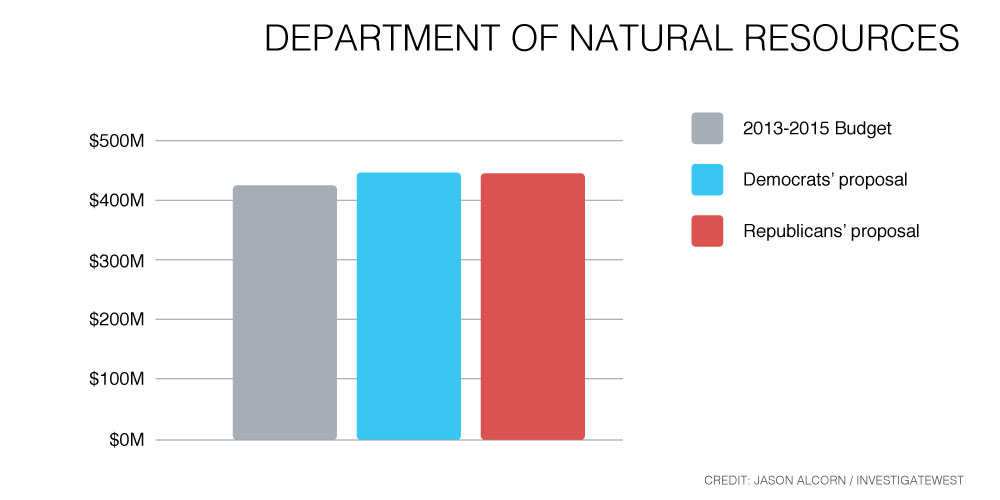 Department of Natural Resources: Washington’s agency dedicated to managing state-owned forest, agricultural and aquatic lands could receive a funding boost of between $19.8 million and $21.1 million for the next two years, roughly a 5 percent boost. The House proposes $439.7 million for DNR while the Senate pegs the amount at $438.4 million.

Both budgets include more than $4.6 million for geographic hazards and LiDAR mapping, a remote sensing technology to predict natural disasters in the aftermath of the Oso landslide. Both also spend nearly $5.9 million for the state’s Forest and Fish Plan to study the degree to which steps being taken by timber companies to protect salmon are working, also known as “adaptive management.” The program has been controversial because it absolves landowners of liability under the Endangered Species Act even though federal scientists in internal agency documents criticized the program as lacking scientific certainty that it would rescue imperiled salmon runs.

The department did not receive $4.5 million it requested for “initial attack” firefighting costs designed to snuff out fires before they rage out of control. Although the Pacific Northwest’s fire season is off to a dangerous start, with more than 300 wildfires reported already this year in Washington, the state’s proposed firefighting budget is similar to previous years with about $50 million for the biennium. 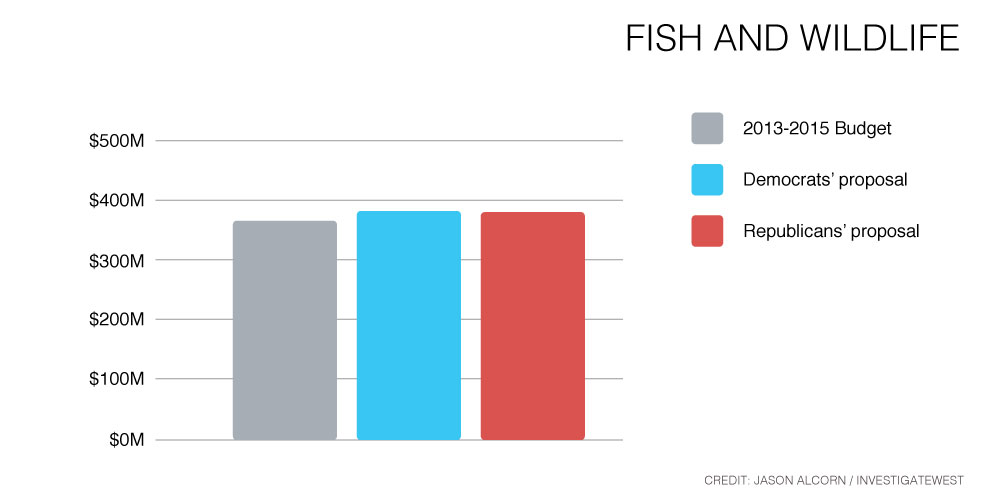 Department of Fish and Wildlife: Leading the state’s conservation efforts for fish, wildlife and their habitats, this agency expects a boost of $14.6 million to $16.7 million — shy of the more than $18 million it requested to enhance statewide programs. The House budget allocates $391.4 million for the agency, and the Senate allocates $389.4 million. That would represent about a 4 percent increase over the last two years’ funding.

Both House and Senate proposals provide more than $1.5 million for tracking Puget Sound fish health, $800,000 for steelhead recovery and $300,000 for managing invasive species in a state with one of the smallest invasive species budgets in the county. The House budget would spend $850,000 to soothe tensions over Washington’s rapidly growing wolf population. Attacks on livestock have been a contentious issue as the animals still largely protected under the Endangered Species Act have begun to repopulate the state. This allocation, which is not included in the Senate budget, provides funds to contract with an organization specializing in human-wildlife conflict resolution. 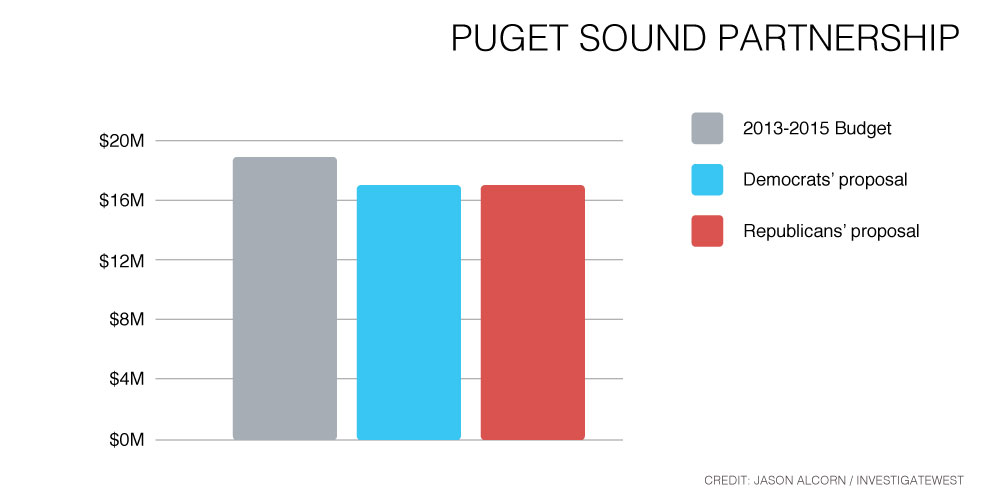 Puget Sound Partnership: This agency was created by the Legislature in 2007 to reinvigorate flagging efforts to nurse Washington’s unique inland sea back to health. It is poised to lose nearly $2 million in funding for the next two years. Both House and Senate proposals have the partnership budgeted at just more than $17 million, compared to $18.9 million over the last two years — a 10 percent cut.

Additional funding comes from the U.S. Environmental Protection Agency’s National Estuary Program, which is changing the way its dollars flow to states. Partnership spokesperson Alicia Lawver says a 10 percent decrease in state general fund dollars led to changes in administrative staff and part-time staffing reductions in information technology, finance and science work groups, as well as reductions in the agency’s Puget Sound Starts Here program and a contract with the Washington Association of Counties to take steps to better protect Puget Sound. The partnership did receive an increase through the Aquatic Lands Enhancement and State Toxics Control accounts, which allows more work with watersheds to develop monitoring and adaptive management plans and update the chinook salmon recovery plan. The budget also includes more support to fill gaps in Puget Sound Vital Signs data. 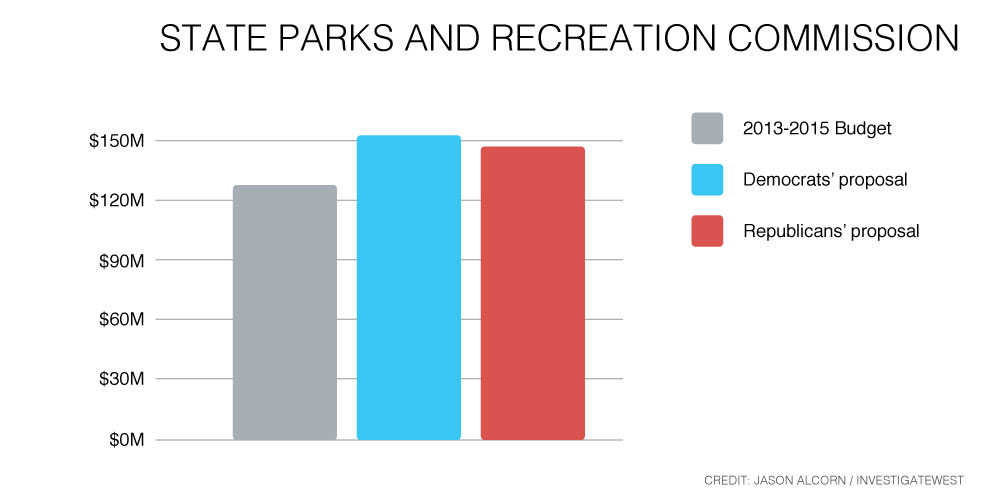 State Parks and Recreation Commission: After years of budget cuts, this agency expects a funding boost of between $19.3 million and $25 million for the next budget cycle. The department, which manages and maintains 124 Washington parks, is slated to receive $153.4 million in the House’s budget proposal and $147.8 million in the Senate’s. That’s an increase of 15 to 19 percent.

Both budgets include $16 million in increases for parks operations. But Parks officials there say they still aren’t getting what they need from the state’s general fund — the pot of money reserved for spending on items like parks and education. The House proposal unveiled this week, which moves closer to the Republican proposal, includes $22.3 million from the state’s general fund for parks — about $7 million less than in the chamber’s previous proposal. Instead, Democratic House leaders expect the department to make up that money with its own revenue. Parks officials worry the agency will be unable to raise the revenue that legislators’ budget proposals project.

The House proposal includes more than $4.4 million to boost parks services, at least some of which parks managers say will go toward rebuilding volunteer efforts and restoring stewardship activities, such as maintaining forest health. The Senate budget an increase includes $16.4 million from the general fund. 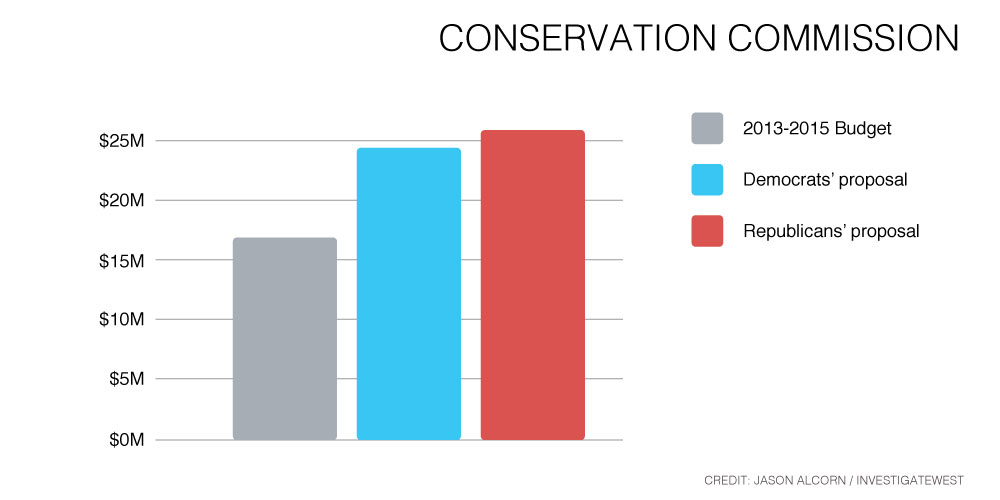 Washington State Conservation Commission: This agency, which works with most of Washington’s conservation districts to preserve resources on private land, is expected to receive a boost of $7.4 to $8.9 million, bringing its overall budget for the two years to around $25 million. That’s the largest percentage increase among environmental agencies in the operating budget, a boost of 44 percent to 53 percent. The House proposal allocates $24.3 million to the commission for the upcoming budget cycle; the Senate allocates $25.8 million. Most of the money in both proposals comes from the state, with around $2.3 million in federal spending authority, meaning the agency has the option to receive federal grants.

The reason for the increase: This year is Washington’s deadline to fund regulations passed in 2011 to protect the state’s critical areas and agriculture. It’s called the Voluntary Stewardship Program. If counties opt in to it, they no longer have to follow rules under the state’s Growth Management Act. The program, which provides incentives for landowners to preserve natural resources, has not received funding since it was passed four years ago. In the meantime, Conservation Commission spokesperson Laura Johnson says counties have “been in a holding pattern,” waiting to update ordinances. Updating the growth-management ordinances, usually required every eight years, can result in restrictions on development because counties are obliged to consider the latest scientific evidence on environmental issues. Around $7.6 million of the agency’s funding will go toward the new program. If it is not funded by July 31, the 28 counties that have opted in to the program will have to revert back to requirements under the law followed by other, more developed counties.