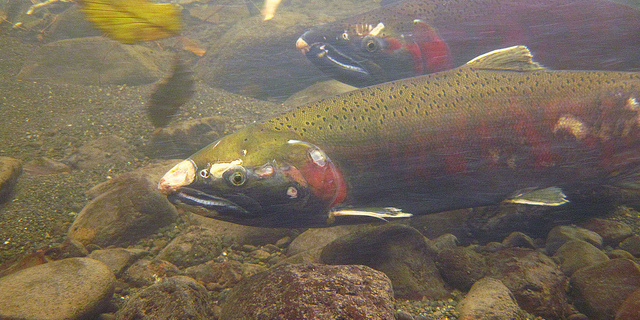 When it comes to fish streams, how warm is too warm?

Home » Environment » When it comes to fish streams, how warm is too warm?

In 2002, researchers at the Oregon Department of Forestry began a nine-year study to figure out if logging activity was warming streams. They measured stream temperatures before and after timber harvest, on public and private land.

Peter Daugherty is head of ODF’s Private Forests Division. His office performed the study, with help from Oregon State University and other research partners. He explains the findings.

“Private sites, comparing pre-  to post-treatment, had a greater  frequency of exceedances,” he says.

When Daugherty says “exceedances,” he means stream temperature readings that exceeded state water quality standards. And he says streams on private timberland tended to exceed that standard a lot more often than those in state forests did.

In fact, streams in private forests got as much as four-and-a-half degrees warmer after logging. The average increase was one and a quarter degrees. In state forests, where more streamside trees had been left, there was no increase.

Known as the RipStream study, the report has become the basis for calls to require wider buffers along streams.

Mary Scurlock is with the Oregon Stream Protection Coalition, a group of environmental and fishing industry organizations.  She says the RipStream study has pushed the Board of Forestry to consider stronger streamside protections.

“It provided a pretty clear and irrefutable basis for the finding, that even a board that is dominated by industry interests had to find that we have a problem, on the basis of that study.”

Federal officials also see the science as pointing toward the need for Oregon to increase buffers to protect fish from warming streams and silt-laden runoff. Will Stelle is the regional administrator for the National Marine Fisheries Service.

“What it tells us,” he says, “is that if we put these improvements into place, there’s a high likelihood that we will be dealing directly with the temperature and sediment loading issues with a substantial degree of confidence.”

The National Marine Fisheries Service oversees salmon recovery under the Endangered Species Act. Along with the Environmental Protection Agency, Stelle’s office has been nudging Oregon for years to tighten rules on logging and other activities that can damage salmon habitat. In 20-12, a court decision forced the federal agencies to crack down.

But folks in the timber industry say there’s no need for wider stream buffers. Jim James heads the Oregon Small Woodlands Association. At the Board of Forestry meeting in April, he disputed the science behind the state standard that says stream temperatures shouldn’t rise by more than half a degree.

“There’s also science that does indicate very strongly that the minor and temporary increase in temperatures cause no harm to fish species,” he said.

“It doesn’t mean that you’ve got the kind of survivals that you need in the smaller streams and tributaries where they spend the early part of their life stages,” he says.

In the end, Stelle says, the scientific case for leaving more trees to keep streams cooler is sound.

The Board of Forestry is slated to decide in June whether to require larger streamside buffers or other measures.

An adviser to Governor Kate Brown has suggested the governor may be open to some kind of public subsidy to cushion the financial blow to family foresters.