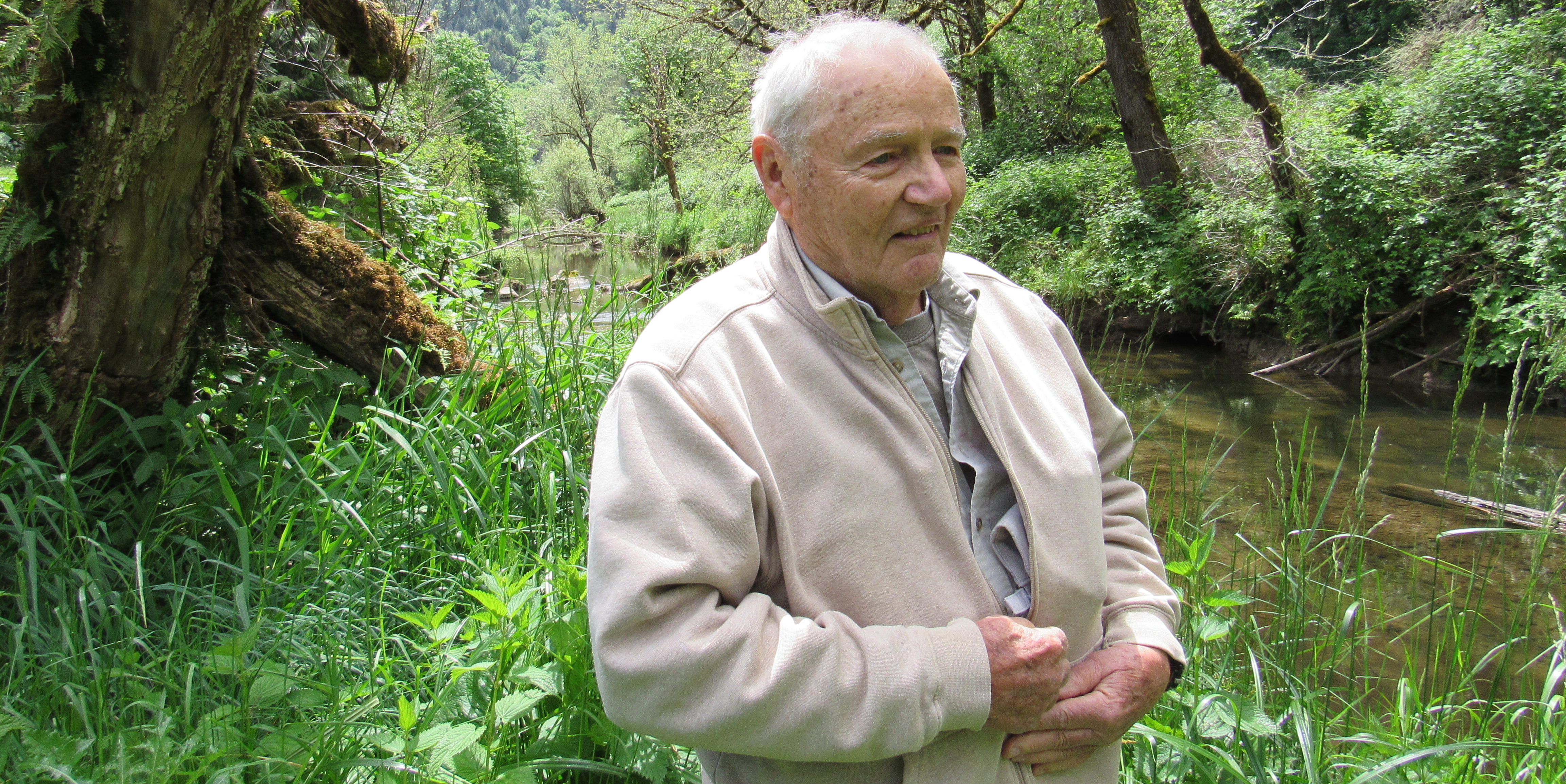 The federal government has been telling Oregon for over a decade that its rules to protect threatened coastal salmon are not up to snuff. Now, the state is faced with a loss of federal dollars unless it gets with the program. In response, the Oregon Board of Forestry is weighing whether to require timberland owners to leave more trees standing along streams to better protect fish habitat. And that’s got owners of small timber lands especially worried.

In Oregon, timber holdings under 5-thousand acres are often described as “family forests,” as opposed to the large commercial forest lands owned by timber giants such as Plum Creek and Weyerhauser. And while the big guys are concerned about the possibility of new rules mandating larger forested buffers along streams, it’s the family foresters who are doing the most sweating.

I’m standing along a lush stream bank near Elkton in Douglas County. With me is Bill Arsenault.

“It’s a large fish-bearing stream,” Arsenault says.  “We have just about everybody in here; chinook, coho, steelhead and then native cutthroat.”

It’s the prospect of rules requiring larger buffers alongside streams  —   what’s called the “riparian zone” – that has small timberland owners such as Bill Arsenault worried. Arsenault says while relatively little of his property would be impacted by such a rule, there are family forest owners for whom as much as 25 percent of their land is already set aside for riparian protection.

“So, taking more property from us has real meaning,” he says. “Society expects us to foot the whole bill. There’s no compensation, even partial, for having taken our lands.”

Wider buffers means leaving more valuable timber standing and small timber owners say such a rule would hit them disproportionately hard. At a meeting of the Oregon Board of Forestry in April, Rick Barnes, a Roseburg-based forestry consultant who owns timberlands of his own, explained that’s because family forests tend to be at lower elevations.

“Our streams are, on the average, larger, have more fish-bearing streams as a percentage and have a unique perspective and exposure to the riparian rules,” he said.

Barnes is also a member of the Committee For Family Forestlands. That’s a group set up by the Board of Forestry to advise it on issues related to family forests. Barnes cautioned the board in April against adding to the regulatory burden.

“The family forestland owners already have significant challenges in making actively-managed forest economically viable,” he said. “Small forests that do not return an economic benefit are more likely to be converted to other uses and subject to fragmentation.”

The thing is, salmon, steelhead trout and other fish need cold water to thrive. If logging removes the trees near a stream, the lack of shade can make that water warmer. Is that a problem in Oregon? Mary Scurlock,  who represents  the Oregon Stream Protection Coalition, says there’s little doubt that it is.

“Oregon has in hand very clear monitoring evidence that we are not protecting cold water streams from harvest-related stream warming, in violation of the state’s water quality criteria,” she says.

The Oregon Stream Protection Coalition is a group of environmental and trade organizations that seeks stricter logging rules to protect fish habitat. Scurlock points to a study conducted by the Oregon Department of Forestry that found many private forestlands logged according to current rules still exceeded temperature standards set to protect fish.

As is often the case in environmental issues, the science is in dispute. Federal officials and environmentalists say there’s a clear need to leave more trees standing to keep steams cooler for the fish. But the timber folks say the studies leave important questions unanswered. In Part Two of this story, we’ll look at what the science does – and doesn’t – say.