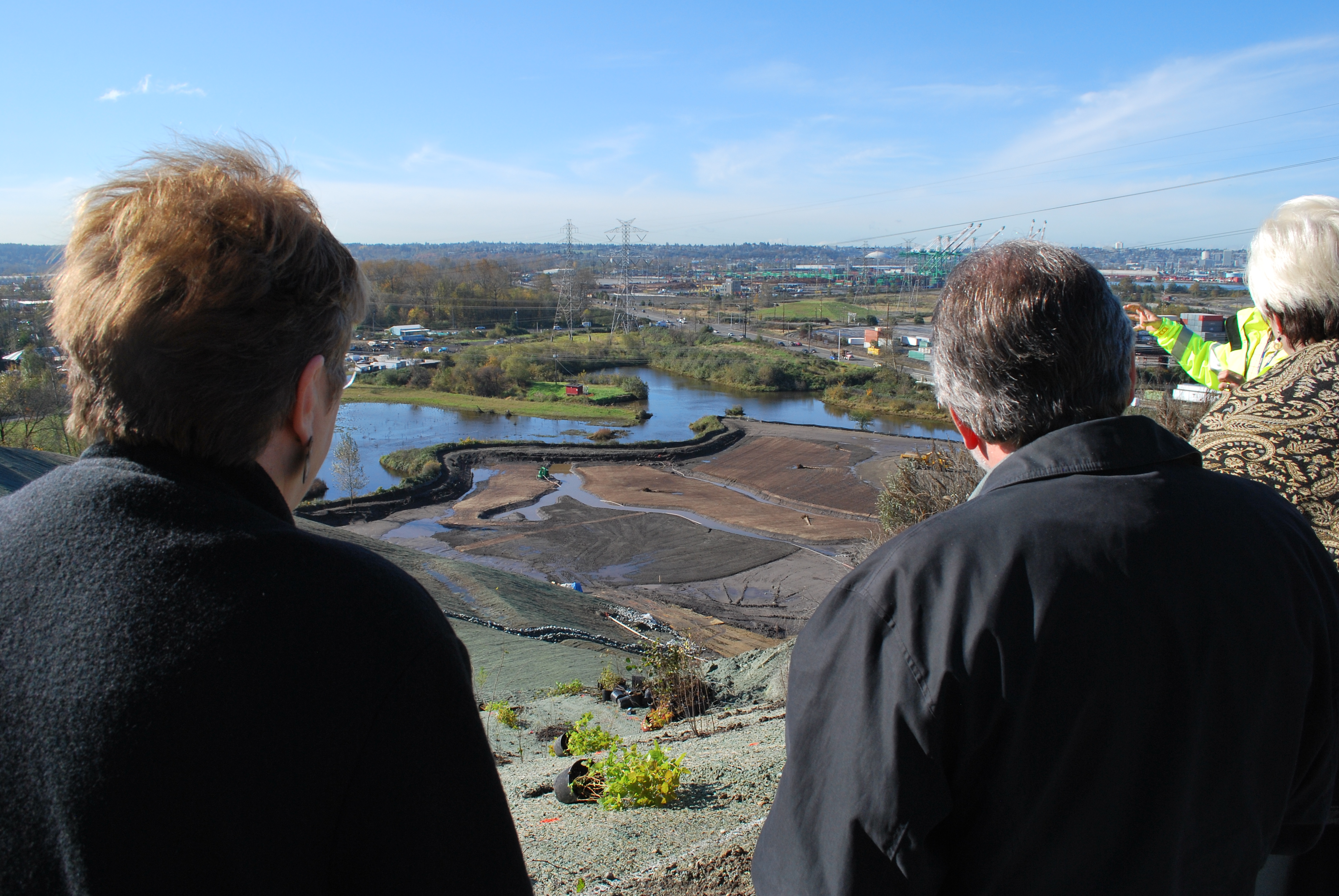 Whether you call it budget trickery or prudent financing, a politically divided Legislature continues to tussle over how to spend more than $300 million collected from a tax on hazardous materials, including gasoline and other petroleum products.

Environmentalists argue that the Republican-controlled Senate has gone haywire, proposing a budget that would overspend anticipated revenues from the tax by $200 million over the next two years. But Senate Republicans say they are using a cash-flow method approved in 2013, and they are confident the money won’t run out.

The tax, called the Hazardous Substance Tax, was imposed in 1988, when voters approved Initiative 97, the Model Toxics Control Act, or MTCA, to clean up hazardous-waste sites.

Since then, the toxics-control money has become a political tool, diverted by Democrats to avoid cutting state programs during the Great Recession and now being used by Republicans hoping to balance a lean budget without raising taxes.

The use of the MTCA toxics-cleanup money stands as an example of how creative budget writing can bail out legislators when money is tight — and how a tax passed for one purpose gets diverted for other uses. This and similar efforts are likely to undergo increased scrutiny as a special legislative session begins Wednesday and lawmakers intensify their efforts to reconcile the two-year spending plan.

The Senate’s operating budget proposes to use $214 million of the toxics-control tax revenues to pay salaries and expenses at the Department of Ecology, some $27 million more than proposed by the House.

Taken together, the two Senate budgets would spend nearly $200 million more from three MTCA toxics-cleanup accounts than the total amount of revenues expected from the tax over the next two years.

Environmentalists warn that the Legislature is digging a hole in the toxics-cleanup accounts that could eventually result in cutbacks in ongoing environmental programs, already funded at less than 1 percent of the state’s operating budget.

“Doing special accounting or budget construction that over-extends accounts and sets you up for problems in the future does not make sense,” said Darcy Nonemacher, legislative director for the Washington Environmental Council.

The Senate’s budget ignores a revised forecast from the Department of Revenue that Hazardous Substance Tax proceeds will decrease $98 million, the result of a dramatic decline in gasoline prices since September. That includes a 3 percent decline in tax revenues for the remaining 2013-15 biennium and a 21 percent decline for the 2015-17 biennium. The tax is assessed at 0.7 percent of the wholesale value of gasoline and other chemical products.

Had the Hazardous Substance Tax revenues held stable, the Senate budget would have over-appropriated the funds by half as much — some $100 million instead of $200 million over current anticipated revenues.

Sen. Doug Erickson, R-Ferndale, chair of the Senate Energy, Environment and Telecommunications Committee, does not view this budget practice as over-appropriation. He says a new cash-flow system, approved by the Legislature in 2013 as part of an MTCA-reform bill, allows spending on cleanup projects to keep pace with revenues as they come in.

Many projects funded by the toxics-cleanup money, including hazardous waste cleanups, cannot be completed in two years, he explained in an interview with InvestigateWest. Funds would go out as needed, so there is little worry about running out of money — even if the Legislature appropriates more than what can be supported by anticipated revenues, Ericksen said.

The Legislature never approved guidelines to limit the toxics-cleanup appropriations beyond expected revenues, Ericksen acknowledged. Theoretically, he said, a dramatic drop in revenues — such as with the decline in gasoline prices — could trigger serious problems. But with three separate toxics-cleanup accounts, solutions could involve shifting funds among accounts or delaying funding to other state programs, Ericksen said.

“It is a complicated way we’re doing it,” he said. “It’s not like we have a fixed and firm rule.”

The House took a more conservative approach and did not appropriate the toxics-cleanup funds beyond revenues forecast to be available for the next two years.

Sen. Kevin Ranker, D-Orcas Island, who has studied the situation, said he supports the new cash-flow approach, but not to the extent used by Republicans who drafted the Senate budget. When revenues are fluctuating, it is better to be more careful, he said.

Both Ranker and Ericksen agree that the use of the toxics-cleanup money has gone astray from the original goal of cleaning up polluted sites, and both say they want to get back to that effort. But they concede that weaning other state programs off the funds intended for toxics cleanup won’t happen all at once.

During the recession, funding for cleanup projects began to dry up as the Legislature diverted increasingly more of the toxics-cleanup money to pay for staff and programs within the Department of Ecology. Since 2007, Ecology’s funding from general tax revenues declined by 53 percent — from $132 million to $62 million. Meanwhile, support for the agency from the toxics-cleanup funds increased by 39 percent, from $118 million to $164 million.

Increasing revenues from the Hazardous Substance Tax during the recession made the diversions to support general government easier. During the first 10 years of the state’s toxics-cleanup program, annual revenues stayed below $50 million. In 2000, revenues began climbing, reaching $200 million a year before the recent drop in gasoline prices. At the same time, the costs of cleaning up hazardous waste sites were escalating.

Ericksen characterized the Democratic-controlled Legislature’s diversion of revenues to support general government in past years as a “slush fund.” That is one reason he proposed the 2013 MTCA reform, which included the cash-flow approach to get more projects underway, he said.

The 2013 changes also included a streamlined permitting system and “model cleanup remedies” — a set of recipes that can be used to undertake basic toxics cleanups without extensive engineering and design.

Ericksen said he wants to reassert the emphasis on toxics cleanups.

Ranker, the Democrat, contends that the budget does not go far enough in restoring dollars to toxics cleanups, despite what the Republicans say. He acknowledged that he finds it hard to criticize, since the Democrats did the same thing to avoid cuts when they previously ran the Senate.

Democrats have proposed a variety of new taxes to end the budget dilemma, which is driven by a Washington Supreme Court ruling demanding the Legislature significantly boost education spending.

There’s a big backlog of polluted sites waiting to be cleaned up. The toxics-cleanup taxes restored 6,200 polluted sites over the past quarter century, but 5,400 sites still require investigation and cleanup, according to Ecology. About 1,800 of those sites have cleanups underway, but many others have been languishing for years because money has been diverted from the cleanup program.

The proposed Senate budget includes a plan to move $7.5 million in toxics-cleanup funds to the state Department of Transportation for a purpose other than cleaning up toxic sites. DOT could use the money to help control polluted rainwater runoff known as stormwater.

Sen. Karen Fraser, D-Olympia, a member of the Senate Ways and Means Committee, said everyone agrees that more money is needed to clean up stormwater pollution. She said stormwater does deliver toxic pollution to the state’s waterways, so there is a connection to the original purpose of the toxics-cleanup funds.

Some legislators would shift the MTCA toxics-cleanup money to solve the stormwater problem, she noted, while others advocate for a new tax to upgrade old stormwater systems and build new ones.

“It is a choice,” Fraser said. “When we were in the Great Recession, all the specialized funds got raided. But my general feeling is that until all the toxic sites in Puget Sound get cleaned up, we don’t have a surplus” of money to be diverted elsewhere.

The Senate and House budgets remain far apart going into the special legislative session. But Ericksen expressed confidence that the two chambers’ differences over the toxics-cleanup money will be resolved.