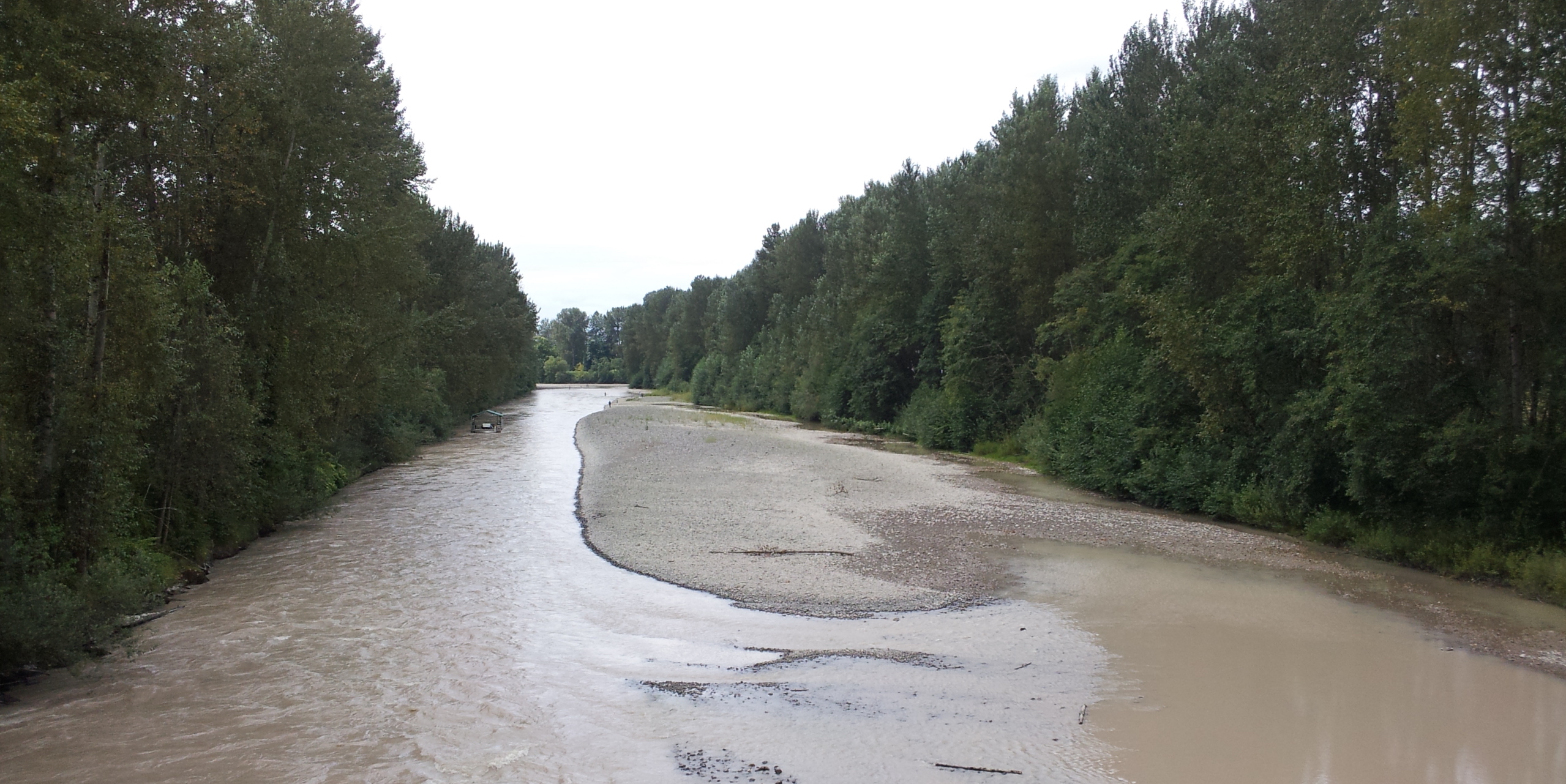 In the little town of Orting, the Puyallup River spilled out of its banks during heavy rainstorms in 2006 and again in 2009, each time forcing hundreds of residents to flee the muddy floodwaters.

Last November, the deluge returned with nearly the same fury. This time, however, after a major construction project to move back the levees around the Puyallup, the river spread out harmlessly across a vast, newly created floodplain. It’s part of a state strategy to restore Puget Sound — giving rivers room to roam helps Puget Sound by restoring habitat for salmon and other creatures far upstream from the Sound.

“The November storm was the fourth-highest flow since 1962, yet the city did not fill one sandbag,” said Ken Wolfe, Orting’s building official, who managed the floodplain restoration. “There was no need.”

A big chunk of the money for moving back Orting’s levees came from a state program known as Floodplains By Design that would be eliminated under a budget proposal unveiled this week by Senate Republicans.  Their budget, which aims to increase spending on education while holding the line on taxes, would completely eliminate some of the most important efforts to restore Puget Sound and slash others to a fraction of their current funding.

That dismays Wolfe. He points out that his town of 7,200, with an annual budget of $3 million, could not have moved back the levees without the state paying $8 million of the project’s $19 million cost, with the rest coming from local and regional sources.

“We desperately need every nickel we can get to keep building these projects,” said Wolfe, noting that Floodplains By Design is one of the few programs that averts millions of dollars in property damage while restoring habitat for salmon, birds and other wildlife. These projects also create trails for people so they can enjoy the wildlife.

As the House and Senate begin what is expected to be a difficult struggle to agree on a new state budget, environmentalists are up in arms about the Senate’s effort to tightly control spending on Puget Sound restoration.

Programs destined to be caught up in the budget battle include:

Environmentalists, already reeling after the more environmentally friendly House had proposed less-drastic cuts, are now seriously worried about the prospects for moving ahead on a restoration effort the state launched in the 1980s.

Speaking in a hearing Tuesday before the Senate Ways and Means Committee, Mo McBroom of The Nature Conservancy said the proposed cuts in Floodplains By Design are “confounding” to people who believe it is one of the most effective conservation efforts in the state. It’s just one of many cuts proposed by the Senate.

“This is one of the worst capital budgets for natural resources priorities that we have seen in a very, very long time,” she told the committee.

After the Senate passes its proposed budget, the proposed spending reductions would have to be negotiated with the House in a conference committee. It’s unclear how important the Puget Sound spending reductions are to the Senate’s Republican leadership, and how hard senators would fight to keep them in the inevitable horse-trading that accompanies a conference committee.

The Senate’s proposed cuts hit hard on the budget items listed as high priorities by the Puget Sound Partnership. That is the state agency directly responsible for rescuing Puget Sound from pollution, overdevelopment and a long list of other environmental woes.

The top 12 items on the agency list would cost about $176 million in the next biennium under Gov. Jay Inslee’s budget proposal. The House approved a budget that would reduce funding for those programs to $147 million, while the Senate’s budget offered $80.6 million.

The Department of Ecology has identified 110 stormwater projects statewide to be funded at a total cost of $63.2 million once the state budget is approved. These projects are being planned from Spokane to Walla Walla to Port Angeles, but some won’t happen if the money comes up short.

In the Puget Sound region, one of many completed stormwater projects is the Coronado-Fremont Stormwater Improvement Project on Bellingham’s Lake Whatcom, which provides drinking water to more than 100,000 people. High levels of phosphorus and fecal pollution drove the lake into a low-oxygen condition with excessive algae blooms.

The $538,000 project, mostly funded by the state, includes biofiltration swales and underground vaults to filter out pollution, an improved stream channel to reduce erosion, and larger culverts to improve streamflow. Since the project was completed last year, the water is cleaner, and flooding and erosion have been reduced, according to Kirk Christensen, stormwater engineer for Whatcom County Public Works.

Darcy Nonemacher, legislative director for Washington Environmental Council, said Puget Sound will never be brought back to health without many more projects like those in Bellingham and Orting.

“There are a lot of problems with our investment in Puget Sound,” she said. “The Senate budget funds stormwater at a much lower level and does not set us up to build on our successes.”

Sen. Doug Ericksen, R-Ferndale, chairman of the Energy, Environmental and Telecommunications Committee, said in an interview with InvestigateWest that he does support Puget Sound restoration — but he is opposed to environmental programs buying up land, as in the case of floodplain restoration. Government land purchases cost money, remove farmland from production and take property off the tax rolls, he argues.

Ericksen said other sources of funding are available if the Democrats would agree to them, including the Environmental Legacy Stewardship Account, an account he helped create in 2013 to fund environmental cleanups, including stormwater projects.

But money in that account comes from the state’s Toxics Cleanup Account, where a tax on the sale of toxic chemicals is deposited. Environmentalists fear that Senate Republicans are taking so much money from the toxics account in the proposed budget that no money will remain for the original purpose — cleaning up toxic waste sites.

Ericksen said he expects the Senate Transportation Budget to contain some money for stormwater controls.

Ericksen’s opposition to buying land is reflected in the Senate budget’s elimination of funding for Floodplains By Design. The Senate budget also cuts funds for most land acquisition by the Washington Wildlife and Recreation Program, which normally is provided millions of dollars to buy and protect critical fish and wildlife habitat.

Under the Senate budget blueprint, Inslee’s administration would be forbidden to use state funds to support a multi-million-dollar federal program called the Puget Sound Nearshore Ecosystem Restoration Program. The House proposes spending $800,000 for the program, touted as one of the largest habitat-restoration projects ever undertaken in the United States. As proposed, about 5,300 acres of habitat would be restored at 11 sites around Puget Sound at an overall cost of $1.1 billion in congressional appropriations spread out over many years. The state would fund 35 percent.

“It is a gigantic waste of taxpayer dollars, no matter where the money comes from,” Ericksen said.

If the money spent on land acquisition through the years had been spent instead on replacing culverts and other impairments to salmon migration, the state “would be way ahead today” in restoring salmon populations, Ericksen said.

Jeff Parsons, legislative policy director for the Puget Sound Partnership, said the effort to restore Puget Sound is caught in a dilemma. If people don’t want regulations to protect sensitive streams, shorelines and wetlands, then the alternative is to purchase property that contains these essential elements of a healthy ecosystem, he argues.

Ecologically important areas, such as wetlands and floodplains, also provide benefits that save people money, he added. Saving a wetland is cheaper than building a stormwater system, he said, and a protecting a floodplain is cheaper than a levee system.

“And once these areas are protected, they never need maintenance.”

Correction: The Senate budget does not shift funds for land acquisition to park maintenance in the Washington Wildlife and Recreation Program, as originally reported.