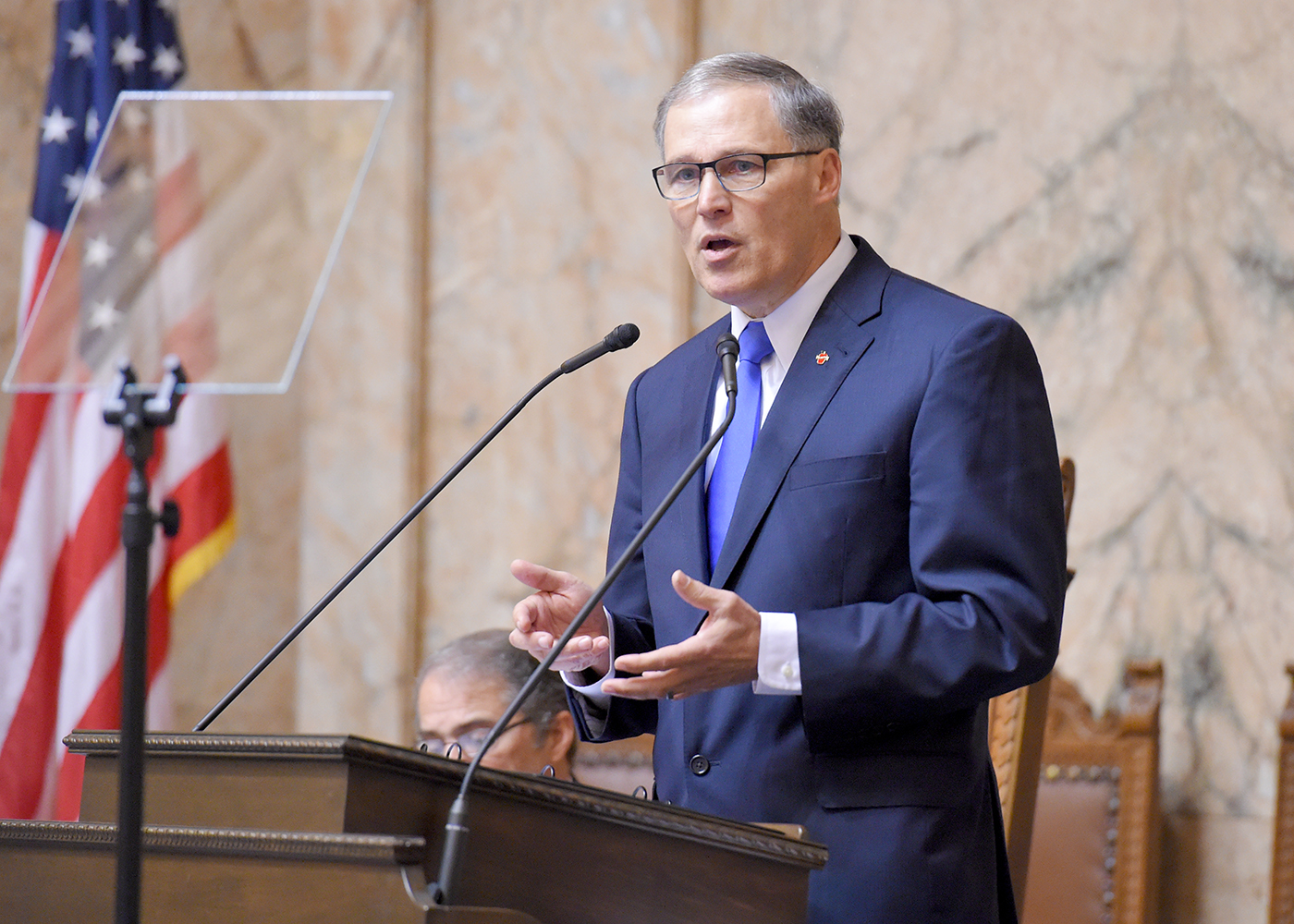 With the feds pressing Gov. Jay Inslee to better protect consumers from toxic chemicals in fish, a Senate committee gutted a potentially pivotal bill to allow the state to set up a new toxic-cleanup program.

Inslee now opposes the legislation, saying it would leave him without tools he needs to head off federal intervention in Washington’s water-pollution-control system.

Inslee’s toxic-cleanup plan calls for attacking pollution at its source, even before the pollutants can get into waterways where they accumulate in fish that are then eaten by consumers. Inslee contends that his approach would be more effective than traditional cleanup methods focused on industrial and sewage discharges. Most pollution nowadays comes from stormwater — a foul mixture of pollutants that washes off roadways, parking lots and other hard surfaces when it rains.

Inslee’s plan — and the focus of the legislation (HB 1472) — is to identify the most dangerous chemicals, track them back to their source and look for safer alternatives.

Originally, the governor’s legislation would have required the Department of Ecology to develop these so-called “chemical action plans,” including ideas for removing toxic substances from the environment. The agency could also order chemical manufacturers to consider safer alternatives and even ban chemicals when safer ones are available.

But the Senate Committee on Energy, Environment and Telecommunications on Tuesday voted to take away Ecology’s ability to ban chemicals and limited the number of toxic substances Ecology could study.

“Why are we getting boxed in?” asked Rob Duff, the governor’s environmental policy adviser. “This bill provides almost no help. We really hope the Senate changes course and gives us a bill that works.”

Inslee intends for the proposed chemical-action plans to bolster his bid to avoid federal intervention in the state’s water-pollution-control system — and he is backed by industry and municipalities that fear harsher federal regulation.

The state’s water-quality standards are required under the federal Clean Water Act to be updated to reflect new information, but the state has been under fire for years of delay in approving the new standards, now scheduled for adoption in August. The U.S. Environmental Protection Agency already has indicated that the state’s proposed standards may not be strong enough.

Without a comprehensive state law, the governor will have a hard time convincing the EPA that his program can be more effective at cleaning up the state’s waters than with water-quality standards alone, Duff said.

The House approved Inslee’s plan with a 63-35 vote, but only after stripping away any authority for Ecology to ban chemicals. Instead, any bans would have to be approved by the Legislature, where industry officials can lobby against Ecology’s plans. Chemical and product manufacturers made it clear during testimony on the bill that they did not trust the agency to make such critical decisions.

“This is an unprecedented delegation of legislative authority to the executive branch,” said Mark Greenberg of the American Chemistry Council, speaking against the bill before the House Environment Committee. “The power to ban any product in any home in Washington state is a very potent power.”

Industry officials are still chafing under the state’s Children’s Safe Products Act, a 2008 law that requires manufacturers to report products containing 66 toxic compounds. They argue that the list of covered chemicals developed by state agencies is overbroad, and some of the chemicals should not be considered hazardous.

Although the governor’s bill approved by the House was weaker than Inslee preferred, he went along with it. Ecology would still be able to develop chemical action plans and recommend that the Legislature ban chemicals when safer alternatives could be found.

But the governor could not accept the bill coming out of the Senate committee this week. Under the amended bill, Ecology would not be allowed to conduct an assessment of safer alternatives without approval of the Legislature. The bill also specified that chemical action planning could be done on only two lists of chemicals — the federal “priority pollutant list” and the state list of “persistent bioaccumulative toxics.”

“It doesn’t allow us to address emerging chemicals of concern, which are the most important ones to tackle,” Duff said.

Such chemicals include pharmaceuticals and personal-care products such as deodorants and shampoos. Scientists in recent years have documented that they are widely dispersed in the environment by stormwater, septic systems and sewers. Other chemicals worthy of study but not on the lists are certain phthalates, Duff said. These chemicals are used in a variety of applications including making plastics softer, with some linked to cancer and other health effects.

Most Democrats on the Senate committee voted against changing the bill from the House version, and they ultimately voted against the entire bill.

“I am extremely disappointed with this body of the Senate,” said Sen. Kevin Ranker, D-Orcas Island, before the vote. “We have a watered-down vehicle that will sound good, so we can stand up and say we did something, but I don’t think we are doing nearly enough.”

“I don’t believe this is a watered-down bill,” countered Sen. Doug ccksen, R-Ferndale, chairman of the committee. “I think this is a big step forward in the right direction.”

Ericksen argued that the Legislature needs to retain authority over what should be done with chemicals in a free market. The number of chemicals to be studied — four every two years — “would be within a scope that this legislative body could handle.”

It is unfortunate, Ericksen said, that the chemical action plans are being linked to water-quality standards required by the federal government. Ericksen said the EPA is likely to judge the adequacy of the state’s water quality standards under federal rules, without regard to the governor’s toxic-cleanup plan.

Inslee has linked the two issues together because he contends that chemical action plans would be more effective at reducing overall pollution, since only a fraction comes from industrial and sewer discharges. It doesn’t make sense to tighten limits on discharges from industrial pipes, he argues, until something is done about other sources of pollution that could be addressed with action plans.

New water-quality standards proposed by Ecology are at least as restrictive as the existing standards, except for arsenic, but many environmentalists and tribal officials expected the revisions to result in far greater restrictions for more than 100 regulated chemicals — and they seem to have the support of Dennis McLerran, regional administrator for the EPA.

McLerran has said the calculation for the state standards should maintain the existing cancer risk rate of one case of cancer for every million people exposed, while the governor has proposed increasing the risk factor by ten times, to one case in every 100,000 people exposed. Retaining the one-in-a-million rate would require reductions in chemical discharges from industrial and sewage-treatment pipes, often at increased costs. That’s because other factors in the equation have been updated, including estimates of how much fish people eat and how toxic certain chemicals are to humans. (InvestigateWest previously revealed how business interests, especially The Boeing Co., used their influence with the administration of former Gov. Christine Gregoire to block updates of the water-quality standards to protect fish consumers.)

Inslee requested a total of about $12 million for his entire program, which goes beyond chemical action plans into research on stormwater pollution, grants for clean technology, support for local pollution investigators, monitoring toxics in people and more. The House set aside about $6 million and the Senate about $4 million to support the program, although they would spend the money on different projects.

Meanwhile, Ericksen noted that his committee successfully merged the chemical-action legislation with a separate bill to ban five toxic flame retardants, commonly used to reduce the risk of fire in furniture, children’s clothing and electronic devices. This is the third year that the ban been proposed.

Ivy Sager-Rosenthal of Washington Toxics Coalition said the Legislature’s failure to ban toxic flame retardants the past two years is exactly the reason why a state agency should be given that authority.

The need for an assessment of alternative chemicals is equally clear, she said. The Legislature banned the first group of toxic flame retardants in 2007, after the chemicals started showing up in people and their homes. In response to the ban, industry substituted other chemicals that turned out to be equally hazardous.

“There is nothing in current law that requires them to switch to safer flame retardants,” Sager-Rosenthal said. “We are on this toxic treadmill of turning over one chemical after another. That is why we think a state agency should have the authority to assess safer chemicals and ban unsafe ones as they see fit.”

Washington has been a leader when it comes to protecting people against chemical exposure, she said. This state was one of the first to ban bisphenol-A in baby bottles, lead in toys and mercury in a variety of products. Now studies are showing that a common replacement for bisphenol-A, known as bisphenol-S, creates its own significant health problems.

“It used to be when we did these banning bills, people would argue over the science,” she said. “Nobody is arguing now that these chemicals should not be banned.”