After 10-Year Plan, Why Does Seattle Have More Homeless Than Ever?

Home » Government » After 10-Year Plan, Why Does Seattle Have More Homeless Than Ever?

Ten years ago this month, King County made a bold promise: to end homelessness in 10 years. The ranks of the homeless have declined in Washington state and nationally during that time. But in the Seattle area, the number of people sleeping on the streets and in shelters has only gone up.

According to the latest count in January, at least 3,772 people spend their nights outside in King County. An even greater number have some temporary roof over their heads, in homeless shelters or transitional housing.

Homelessness is growing much faster in King County than the county’s overall population.

You can find evidence of the rising tide of homelessness in lots of places. One of them is SoDo. On weekdays, commuters park along the curbs of this mostly industrial area south of downtown Seattle. And 24/7, so do the tents, recreational vehicles, and cardboard structures of the homeless.

Angi Davis, head of the SODO Business Improvement Association, took me on a tour of the neighborhood.

“There’s somebody living underneath that box truck right there in the back – a sleeping bag and a bunch of stuff pushed underneath, so he got a little bit of shelter from the weather,” she said. We drive by one stretch of sidewalk where a tent and a cardboard home, both covered in blue tarps, squat between a razor-wire fence and a Mercedes Benz. Down the block, more cardboard homes next to a Cadillac Escalade.

“I would not walk down that street by myself,” she said.

At the wheel of her Mercedes, Davis said she empathizes with people living outside. But she asked the question many are asking as we reach the end of the 10-year plan: “Why is it other big cities don’t have the same issue?”

More people are without homes in the Seattle area than in other cities our size. Only the New York, Los Angeles, and Las Vegas areas have bigger homeless populations than King County.

To understand how we got here, you have to go back to the early 2000s, when a high-tech bubble fueled rising home prices in the Seattle area and the federal government cut funding for homeless services and low-income housing.

A group of government and non-government officials in the Seattle area grew tired of just helping individuals cope with life on the streets.

“At some point, you have to ask yourself the question, ‘Is it good enough to simply serve people year after year without trying to significantly change the problem?'” said Vince Matulionis with  United Way of King County.

Around the same time, the Bush administration essentially required communities around the country to come up with these kinds of plans if they wanted to keep getting federal dollars to help the homeless.

The Bush administration focused on ending chronic homelessness. People who have been homeless for a year or more are a small but costly fraction of the population in need of help.

Many communities, including the Seattle area, aimed higher. They came up with 10-year plans to end all homelessness.

“It’s a very ambitious job title. Some days it’s harder to live up to than others,” he said. “But that’s our aspiration. In a community like ours, we shouldn’t have thousands of people that are homeless.”

“We’re really fortunate,” he said. “We live in a very compassionate community.”

Seattle’s liberal voters and politicians don’t mind spending money on social problems. And there’s a lot of money here. King County has the largest United Way in the country. The Bill and Melinda Gates Foundation — the world’s wealthiest — puts money toward the homeless in its home town.

All told, King County officials estimate that a billion dollars or more has gone to help the county’s homeless over the past decade. Nearly 6,000 units of affordable housing have been built, more than in any city except New York or Los Angeles.

Yet the effort is losing ground.

“Boy, it would be nice to be able to say there’s one or two main reasons why we’ve not achieved our goal of ending homelessness,” Matulionis said. “Unfortunately, it’s so much more complicated than that.”

Nowhere to go but up

Get to know even a few homeless people, and you’ll quickly learn there are many ways to wind up on the streets.

Dozens of homeless men packed the Connections shelter in downtown Seattle one morning, staying warm and dry, using the Internet, or just dozing in their chairs.

“I worked on that tunnel job down there at the Husky Stadium,” said Aaron McPhatter. “I was down there for five months, and I was doing really good. All of sudden got laid off. I need some work.”

For Gary Eyerly, the problem has been affordable housing. He said even if he finds work, he thinks he’ll still have to stay in a shelter a while to save enough money to get housing.

“Yeah, like they’re doing in the U District,” added another man.

“Everybody in here got a different situation why they became homeless. My scenario is, yeah, I just got out of prison. That’s why I’m down here,” said Michael, who didn’t want to give his last name. “It ain’t about me. It’s about the whole community of homeless people.”

Jonathan Murrell said his life spiraled out of control after a car accident in 2012. “Hurt my shoulder. Snapped my neck. I was unable to work for a while, and I just fell down on bad luck,” he said. Murrell said he hasn’t had housing in years.

“I’m down at the rock bottom right now. I have nothing. I feel like it’s nowhere to go but up from here.” 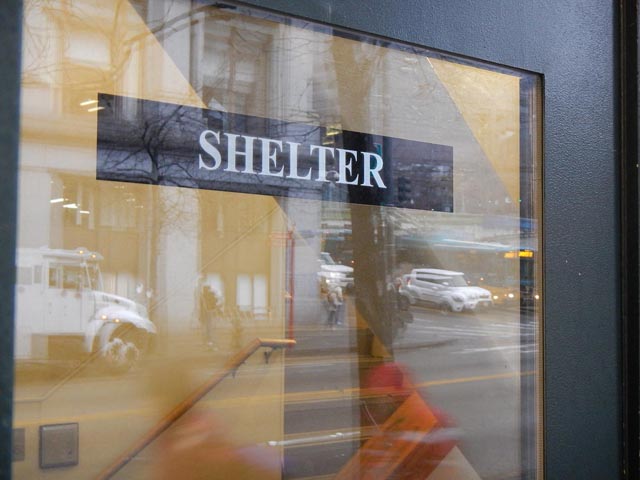 Can’t build our way out of it

Though he lives at the other end of the economic spectrum, Dan Brettler, chief executive officer of Seattle-based Car Toys, is familiar with all these scenarios. Brettler has been vice chair or co-chair of the Committee To End Homelessness since it began.

“Even though we’re all beyond frustrated and disappointed with some of the results, including the increased count on the streets, which is devastating, we have accomplished a lot of good work that we have been recognized for,” Brettler said. “Thousands of people have gotten a roof over their head. The problem is there’s been a significantly higher inbound flow of people coming into the homeless cycle than we anticipated.”

Homeless advocates point to forces far beyond the committee’s influence: everything from broken mental-health systems to racial disparities. Two-thirds of all homeless people in King County’s shelters and transitional housing are people of color, even though people of color only make up one third of the county’s population.

Brettler singled out the recession that hit midway through the 10-year plan. But he said even the booming economy of present-day Seattle is still dumping people on the streets. And this might not be the kind of talk you’d expect to hear from a CEO.

“We have a very thriving, healthy, growing G.D.P. [Gross Domestic Product] economy, [yet] we’re creating poverty at unprecedented levels at the same time. That’s a broken economy fundamentally,” he said. “There’s something inherently wrong with our economic structure.”

Of course, many of those economic trends aren’t limited to King County. So, why is homelessness getting worse here when it isn’t nationally?

One reason, according to the United Way’s Matulionis: King County’s 10-year plan didn’t focus enough on root causes, like the lack of affordable housing.

“Seattle’s the fastest-growing city in the country last year. So, rich, poor, and otherwise, we attract a lot of people,” he said. “A lot of people get here and find that they struggle with the cost of living and the cost of housing, which puts them at risk for homelessness.”

Among other things, the 10-year plan focused on providing permanent housing for the homeless rather than shelter beds. But since housing is expensive and slow to build, the county wound up with even more people lacking shelter of any kind.

“We can’t build our way out of it,” Matulionis said. “We’re never going to be able to build enough housing if we don’t reduce the number of people becoming homeless.”

The Committee To End Homelessness has been working to revise its strategy, now that the 10-year plan is ending and local homelessness is worse than ever.

“The fact that it has not been ended reminds us of the need to be humble in all things,” Robert Taylor said. Taylor was dean of St. Mark’s Episcopal Church in Seattle when he became the first director of the Committee To End Homelessness, a position he held until 2007.

As a society, “we have failed our fellow citizens in what I think many of us see as a basic right to really have shelter,” Taylor said. “I know that we can do better, and I know that we have the resources to do it.”

Current committee members mostly avoid saying anybody did anything wrong or promised too much in the old plan. The language of choice is that they’re “pivoting” to a next chapter.

Talk of ending homelessness is being replaced with less-lofty aspirations: making homelessness rare and brief when it does occur. King County has a long way to go on both those goals. Right now, people typically go without a home for more than four months. The goal is three weeks.

Committee members say the strategic plan now in the works will enable them to help the homeless more effectively. But they say that tackling root causes of homelessness, like inequity, can’t just be one committee’s job.

Without effort from the rest of the community, Colleen Kelly with the City of Redmond said, efforts to tackle homelessness will only bring more of the same.

“You keep throwing the babies in the water,” Kelly said, “We’ll do our best to get them out.”

Mark Putnam, who took the helm of the Committee to End Homelessness a year ago, underscored the challenge ahead while speaking to members in January.

“It is the issue that our entire community should be focused on, when we have people living and dying on our streets in King County,” Putnam said.

He commended committee members for their work but said: “It’s also our duty as leaders in this community to be looking at what we could do differently to get better results.”