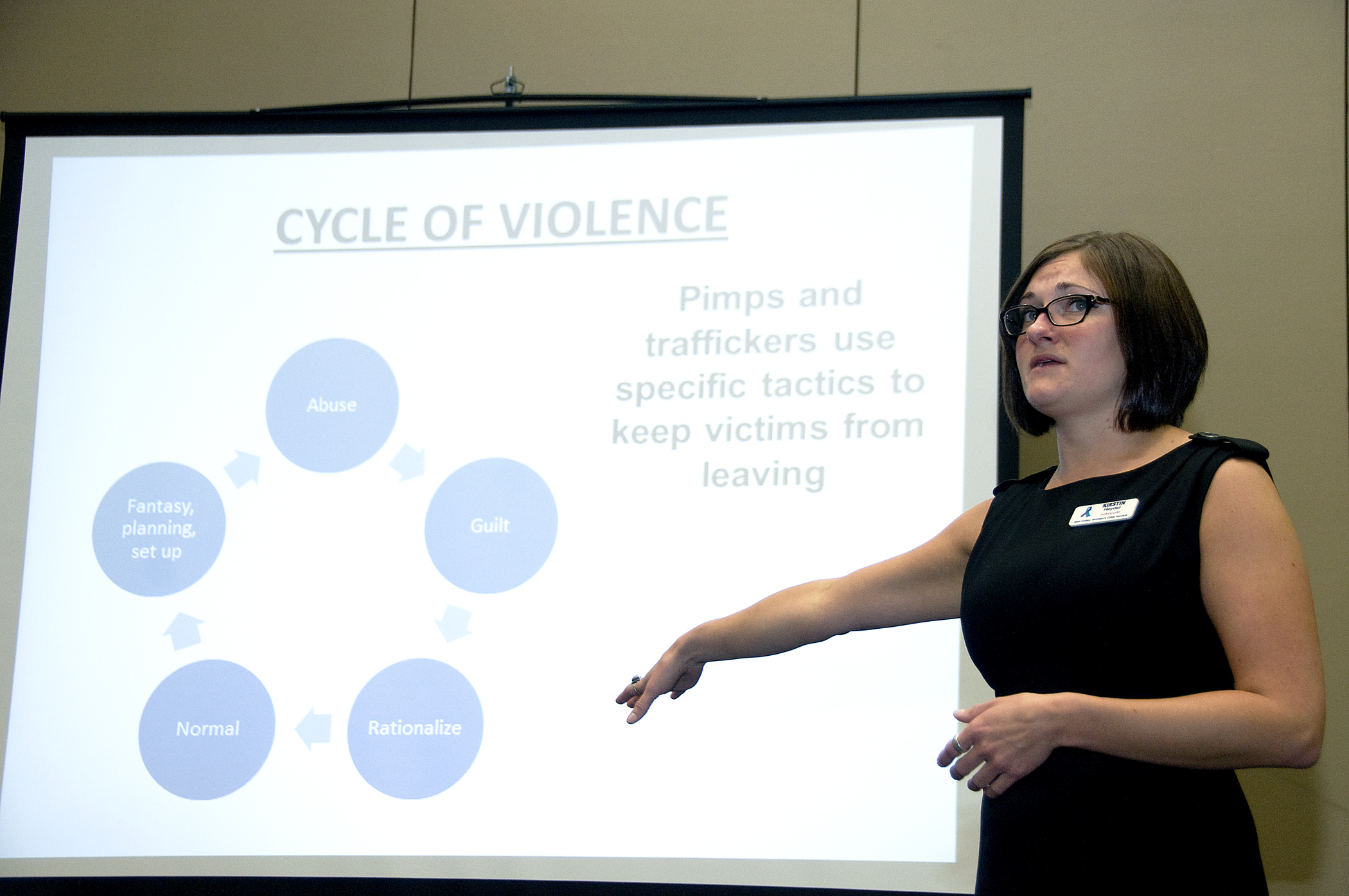 In Oregon, Gangs Take Over as Sex Trafficking Goes Offline

PORTLAND —This river city along Interstate 5 has long had a reputation as a hotspot for child sex trafficking, even after a 2010 report to Congress made it clear that Seattle and other American cities are just as bad and that sex with children is a burgeoning American pastime.

It’s a sad truth many communities have yet to embrace. But consider the numbers:

Police say escort ads for young women are a good barometer of the size of a trafficking market in any town — women billed as young but legal who often turn out to be minors. The Portland metro area, population 2.3 million, saw 377 total listings for escorts in a recent week on the web site Backpage. Seattle, with a metro-area population of 3.5 million, had 523 — roughly the same rate per capita. In Atlanta, where the population is three times larger, there were more than 1,100 listings. 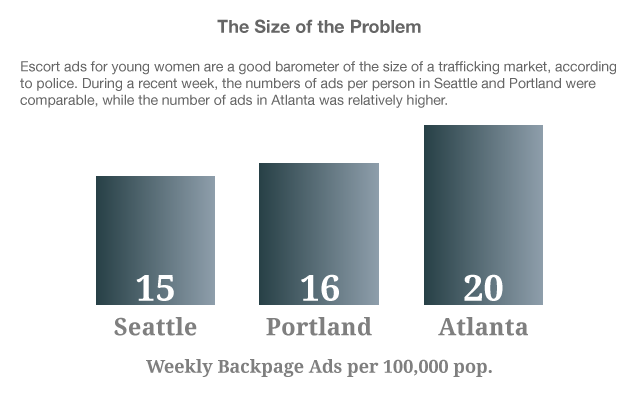 Lots is happening in Portland to combat the problem of children being forced into the sex trade – usually by pimps who first present themselves as boyfriends. In Portland, authorities have learned lessons that are important for Seattle and other cities along I-5 corridor, which enables sex trafficking to stretch to Southern California:

As the deputy sheriff heading the Human Trafficking Task Force in Multnomah County, Ore., Keith Bickford is acutely aware of these trends. And he’s grateful to have a special helper, a woman who works as an advance guard at concerts and sporting events. When she gets there, she snaps up magazines and brochures from the sex trade.

Among the latest was a tabloid-sized glossy, a barely dressed girl on the cover poised over a line of cocaine.

Inside, these publications typically feature photos of so-called “models.” Police are particularly interested in the ones that show only the girls’ bodies from the neck down – they are often underage.  So investigators scour the booklets looking for tattoos and other telltale markings that might help them find kids trafficked for sex, many of whom may travel through the Portland area on their way to and from Seattle.

“A lot of the traffickers trade girls or send girls up there or back down here for business. Concerts, wherever they can make the money,” Bickford said.

The newer marketing methods, and the practice of moving the children between cities from one event to the next to evade detection, which InvestigateWest reported in 2010, make it tougher for police to track offenders and the kids they lord over. 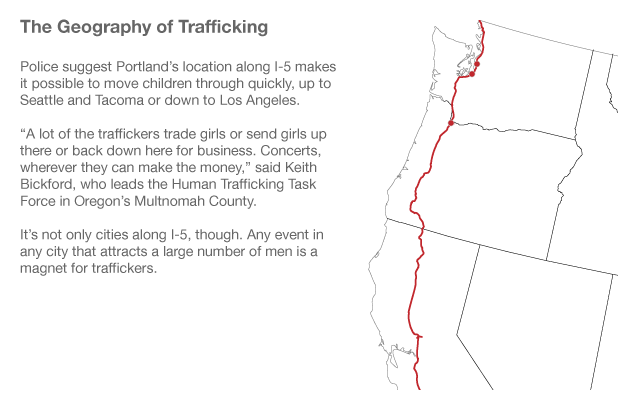 The number of children exploited commercially for sex is unknowable, according to a 2010 U.S. Department of Justice report. Lured at first by attention, gifts and professions of friendship and love, many are normal children smitten with what looks like courtship, the report said. Others already are endangered runaways badly in need of shelter and food.

Pimps’ initial kindness and permissiveness make them infinitely likeable at first. Their youthful recruits don’t have to mind bedtimes, keep curfews or worry about whether to go to school or do homework. But by the time the children in their charge are trafficked for sex, pimps’ kindness has malevolently evolved into violence, intimidation and psychological manipulation. Drugs and alcohol are frequently employed to keep child sex workers compliant, converting healthy kids into addicts or worsening problems for youths already tripped up by the lure.

“If you’re being a good parent, you’re going to be saying no to things,” Bickford said.  “One thing a trafficker has that is an ace in a hole is that they can say yes to anything.”

Portland has aggressively sought to combat the problem.

Here, a 2013 study commissioned by U.S. Attorney Amanda Marshall found 459 children had been identified as sex trafficking victims by the Oregon Department of Human Services and the nonprofit Sexual Assault Resource Center (SARC) over four years. The average age was 15 and a half. The youngest child was eight. Astonishingly, one in six already had given birth to her own child. African Americans were overrepresented. And about one-fifth came from families with a history of sexual exploitation.

But the statistic that most alarmed police was this one: nearly half had a connection to a gang.

“Just about every gang, especially the bigger gangs in the Portland area, have quite a business going. And it’s kind of a scary situation, but a lot of them are actually working together,” said Bickford. “When gangs start to work together and not worry about territory and things like that, it’s quite a concern.”

Pimps’ best weapon is control. They determine when their charges eat and sleep, how they spend money, where they go and who they see. They teach children to lie about their age, equip them with fake IDs, and poison them against police. According to Sgt. Mike Geiger of the Portland Police Bureau, “this control factor is greatly increased with the advent of gangs” where crossing a pimp and crossing the gang are one in the same. “It raises the level of danger for these young people,” he said, if they try to leave.

For officers fighting the trend, this presents a dilemma. Children who are rescued from the trade often are placed into foster homes, back with parents, or in treatment facilities designed to treat addiction or other problems. They are not certain they are safe from their former overlords in these places, and often they aren’t. Rather than compel the children to testify against their pimps, authorities’ inclination is to leave them be until they are ready to “disclose” – meaning testify. If that never happens, so be it. The child is rescued.

“Really what I want out of it at the end of the day is that she’s no longer exploited,” said Geiger. “If we take care of the person first, the reality is they get to a place of healing much more quickly.”

To make that happen more, law enforcement offices in Portland, including the sheriff’s office, police bureau, and the FBI, which operates one of 66 national task forces on child sexual exploitation out of Portland, are working in tandem with social service providers and the juvenile justice system to get children to safety before prosecuting pimps. They collaborate through a Multnomah County steering committee that allows them to trade information. A full-time specialist aids the collaboration effort, which includes a hotline where people can leave tips about kids in trouble. 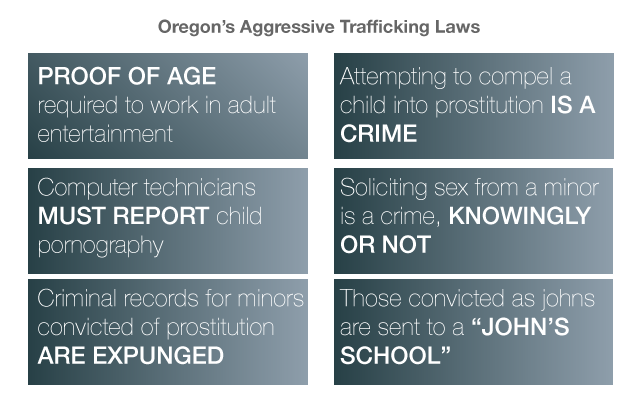 “A lot of the calls we go out on, we don’t have a kid sitting in somebody’s office saying, ‘Hey I’m trafficked,’” said Kirby Crawford, a child welfare specialist who works on the hotline. “Some of the (referrals) we get are from people who are just seeing things that are just not adding up.” A child found in a hotel room with a guy, drugs, money, and a ringing phone, for example. Or a girl on the run who returns with her hair and nails done and a cell phone her parents didn’t know she had. Because the trafficked children tend to know one another, contact with one helps police and social service workers keep tabs on others. This way, “Multnomah County is doing a really good job taking a look at the issue… from a systemic point of view,” said Crawford.

For those victims who do come forward, Marshall, the U.S. attorney, has aggressively prosecuted sex trafficking crimes, aiming for severe penalties. Under Marshall, the Portland U.S. Attorney’s Office has become the third most prolific nationally in securing indictments for trafficking children and adults for sex.

Geiger says despite Portland’s reputation, Seattle and other cities have some serious self-examination to do.

He resists efforts to define the scope of the problem in Portland versus other cities.

“When a community can label it as ‘Portland’s problem,’ then we don’t have to face ourselves,” Geiger said. “What we should be saying instead is yes, that’s right, Portland has a very difficult problem that they’ve been battling with and trying to deal with.