Multiple sclerosis research in the Northwest could lead to new treatments

The mystery of why the Pacific Northwest has one of the highest rates of multiple sclerosis in the world is as enduring as the mystery of the D.B. Cooper hijacking. And has proven about as difficult to crack.

Recently, however, scientists have been closing in on some likely triggers that may be causing the body to hijack its own immune system and turn on itself. Those new findings could lead to new treatment strategies in the future.

MS is a sneaky, unpredictable autoimmune disease that damages nerves and can impair vision and mobility as well as thinking and memory. The prevalence of MS here is about triple the level in the lower part of the United States, and many more times higher than elsewhere in the world. In King County, there are 9,000 known patients, and a growing number of them are children.

The prevalence is so high here that the Northwest chapter of the National Multiple Sclerosis Society has posted giant billboards around the city for the past several years asking questions like these:  Is it the trees? Is it the rain?

The questions may have been rhetorical, but the billboards were a reminder of the need to keep digging for answers about what causes MS.

On a macro scale, scientists actually do know why the rate appears elevated here.

“It’s really the fact we have people here whose genetic background comes from Northern Europe — and that’s the genetic component,” said Dr. George Kraft, director of the Multiple Sclerosis Rehabilitation Research and Training Center at the University of Washington. “And there’s an environmental component. And it may well relate to reduced vitamin D levels. It may relate to other things in this area.”

But what other things? That’s the question, researchers are tackling now. 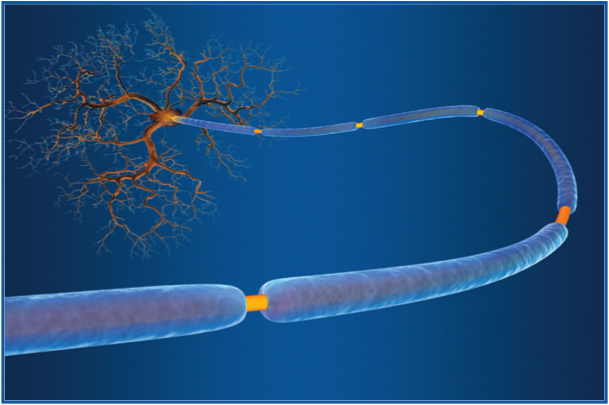 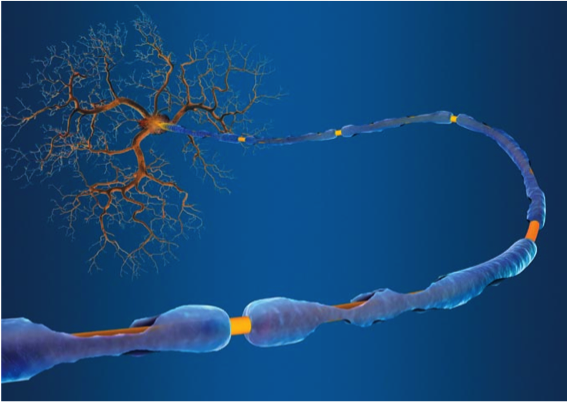 MS is characterized by an attack of the myelin sheath which surrounds the nerve fibers in the central nervous system. Above, a healthy nerve (left) and a nerve damaged by MS (right).
Credit: Seattle Children’s Hospital

One of their first early clues came from a “natural experiment” that took place in the Faroe Islands, a chain off the coast of Northern Europe.

Researchers had observed for a long time that MS is more common at northern latitudes. Kraft describes why the Faroe Islands have historic significance in the epidemiology of MS.

“You would expect because they’re so far north, that there would be a high prevalence of MS,” said Kraft. “But until the late 1930s, there was no MS on the Faroe Islands.”

None – even though the disease was known to occur in nearby Scotland and Scandinavia.

When Hitler invaded Europe, however, the British sent their troops into the Faroe Islands, along with their dogs, he said.  Not long after that, there was an outbreak of canine distemper, which is caused by a virus.

Curiously, though, the canine epidemic was followed by an outbreak of MS among island residents. That led to the theory that MS might be triggered by a virus of some kind – one that thrives at northern latitudes.

“This was really, pretty spectacular because it was an isolated research area where you could look and study this,” he said.

Since then, researchers have found a number of human viruses that may be connected with MS, including Epstein Barr – the one that can cause Mononucleosis – and Herpes Virus Type 1.

But the viral theory has turned out to be more complicated than researchers had hoped.

“A big mistake the field has made over the years is looking for a single virus,” said Kraft.

Researchers now think there are multiple viruses and multiple genes involved in triggering the immune system to attack itself.

While scientist think there is some kind of trigger for MS, the precipitating event appears to be different for people with different genetic backgrounds. They believe, for example, that the risk is higher for people of Northern European descent. 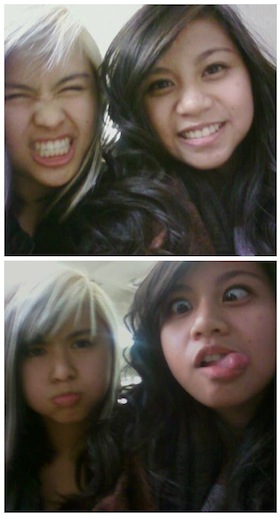 Beyond that, however, the genetics of MS are complex.

“Unlike other diseases, like Huntington’s disease, which might be a single-gene problem, this is looking like this is going to be at least a dozen or more genes,” said Dr. Sylvia Lucas, a neurologist at the University of Washington Medical Center. “So it’s not genetics like inheriting eye color or hair color, but certainly, there is a risk if someone in your family has it.”

Here’s where it gets complicated again, though. Even identical twins don’t have identical risks.

“If you have two identical twins and one twin has MS, there is a one in three chance, which is very, very high probability, that the other twin will have it,” said Kraft.

Gender, too, appears to play a role, leading researchers to suspect hormones are involved in determining susceptibility. More women than men get the disease, and the ratio appears to be widening.

To help sort out the genetics of the disease, researchers around the country, including at the Benaroya Research Institute at Virginia Mason in Seattle, have begun compiling libraries of genetic samples from patients.

They hope these registries will help fingerprint the genes involved. So far, the strongest contenders appear to be in the family of genes that controls the body’s ability to recognize its own cells.

Understanding how the immune system turns on itself could yield some targets for new drugs or treatment strategies in the future.

Estelle Bettelli, an immunologist at the Benaroya Research Institute at Virginia Mason in Seattle, has been at the forefront of this work.  Researchers in her lab are trying to isolate the specific cells in the body that, once triggered, actually cause the damage that’s typical of MS.

T-cells are part of the body’s elaborate defense system. Their job is to attack foreign invaders and keep us well. In MS, though, they get confused and instead attack the covering of nerve cells in the brain and spinal cord. That covering, called the myelin sheath, is like insulation — it helps protect the signals being transmitted from the brain to muscles and organs.

“When cells of the immune system then start attacking this structure, then obviously then the system doesn’t work very well,” said Bettelli. When the nerve coverings are damaged, the signal degrades, and the message can’t get through.  It’s that damage that results in symptoms of MS.

So far, they’ve found two particular strains of T-cells – called Th1 and Th17 – that appear to be implicated in MS attacks. They now believe that mutations in the genes for these two types of T-cells may be responsible for variations in the disease itself – why it comes and goes in some people (a form called “relapsing-remitting” MS) and why it progresses steadily in others.

“And importantly, they may not be equally sensitive to the different drugs, or disease-modifying therapies,” she said. “That’s why we are so interested in basically finding out what they do, how they work, and finding ways to block them.”

If doctors could block, or reprogram the T-cells to keep them from attacking in the first place, they could prevent or delay the symptoms of MS.

One aggressive way to do that is to simply kill off the patient’s damaged immune system and replace it with a healthy one – a process known as a stem-cell transplant. This treatment, which was pioneered by Kraft and others at the Fred Hutchinson Cancer Research Center, is still considered experimental. So far, it’s been used on about 60 patients in the Northwest, and some of them have had long-term remissions as a result.

“What I tell patients is that there’s a really good probability that we can prevent further decline – further loss of function—for a fairly long period of time,” said Dr. George Georges, a transplant specialist at Fred Hutchinson. But because the treatment itself has serious, sometimes even fatal, side effects, it’s only used in advanced cases where other treatments have failed.

Doctors hope they can eventually make the process safe enough to use on patients with less severe disease. In the meantime, the search for other drugs goes on.

Last month, for example, researchers at Oregon Health & Sciences University identified a particular enzyme that is elevated in brains damaged by MS. They now hope finding drugs to destroy or block the action of this enzyme could help repair the brain damage caused by MS. 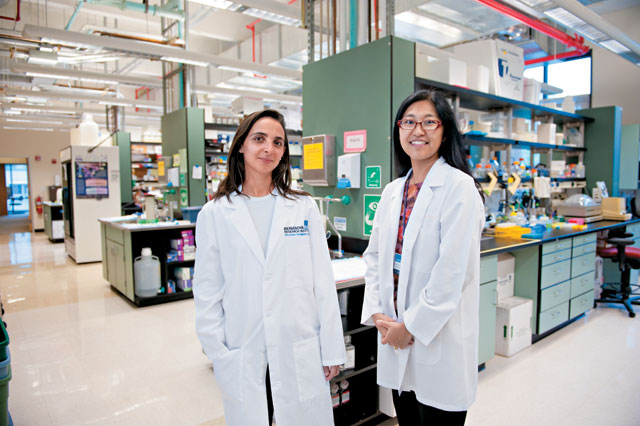 New treatments on the horizon

“We do know that vitamin D is lower in individuals who have MS. It’s probably low in just about everybody who lives in this area – but we definitely know it’s definitely lower in people who have MS,” she said. “And we know that taking a simple vitamin D supplement on a daily basis actually reduces your risk of developing MS. What we have not determined however is whether or not the supplementation of vitamin D and the correction of those vitamin D levels in individuals with MS will alter their disease course.”

Medications for MS have only been available since about 1994, and there are only a handful of them, said Kita. “The key here is that they’re not necessarily the same strength of effectiveness in one person as they might be in another.”

She says they eventually hope to pinpoint particular genetic markers that would help determine which medications will be most effective in which patients. That would allow doctors to customize treatments for individuals, opening the door to genetically personalized medicine.

On average, the treatments reduce relapses by about 30 percent, said Kita. But that doesn’t mean 100 percent of people will get 30 percent reduction.