‘I can’t even talk about it’

Home » Government » ‘I can’t even talk about it’

Leticia Jimenez-Diaz, 41, has two children who are U.S. citizens. But she herself is not. That fact divides her family in a way that could soon rip it apart.

Slumped at a table in a bare-walled meeting room at the Northwest Detention Center, she started to cry when a visitor asked about her children, then ages 9 and 16. She hadn’t seen them in a month and a half, ever since she was taken to the detention center for being in violation of a long-ago deportation order. 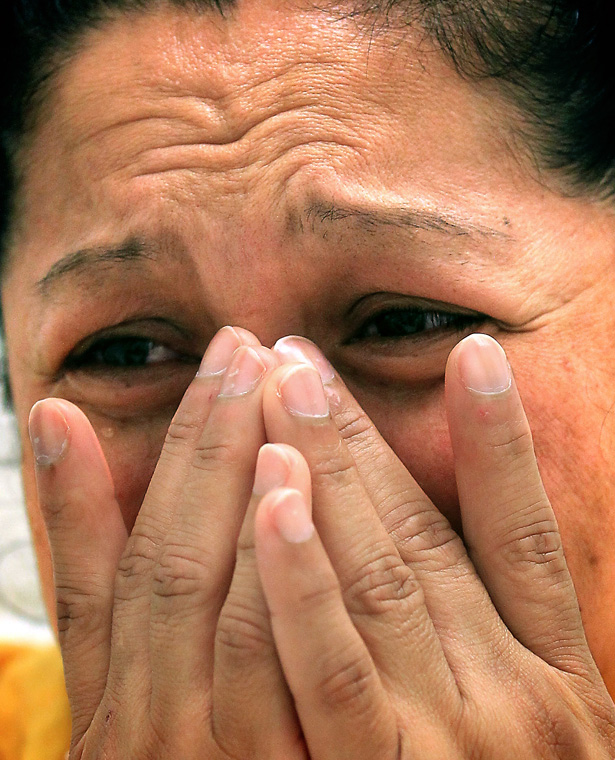 Fearful of being deported and possibly leaving her U.S.-born children behind with relatives, Leticia Jimenez-Diaz, breaks down in tears during a interview at the Northwest Detention Center. Dean J. Koepfler/The News Tribune

It’s an order she says she did not even know about.

In 1993, immigration officers swept through the plant nursery where she was working at the time. As a result, she was supposed to appear before an immigration judge.

But she says she never got the notice to appear.

“I think that they sent the notice to the wrong place,” she said. “I never received it.”

Her attorney, Carol Edward of Carol L. Edward & Associates, confirmed records show Jimenez-Diaz missed the date of that hearing, and in her absence, an immigration judge ordered her deported to Mexico in 1994.

Unaware of that development, however, Jimenez-Diaz continued raising her young sons in Mt. Vernon. She volunteered at their schools. Helped them play soccer. She worked in the flower bulb business and took classes at Skagit Valley College to learn English.

Then in 1999, she went to Mexico to visit her parents. When she returned, she unwittingly elevated her status on Immigration and Customs Enforcement’s priority list. One of the priority categories for deportation is repeat immigration offenders – people like Jimenez-Diaz, who have come back despite either having been turned away at the border or ordered deported on an earlier occasion.

Immigrants who fall in this category are targets of increased enforcement efforts.

Last year, ICE removed 396,096 individuals, of whom 19.6 percent were classified as “repeat immigration offenders.” The largest percentage of those deported (54.6 percent) were classified as criminals. Criminality includes everything from driving infractions to more serious offenses.

Leticia says she knew none of this. But it caught up to her last year.

“One morning when I was driving to my work, there was a car that followed me. And then it put on lights,” she said. She was picked up by Border Patrol agents and sent to detention, where she was held for six weeks with no bond before being released with the condition she would cooperate with authorities. She is required to wear an ankle monitor until her deportation date on Sept. 10.

Her attorney has requested that ICE give her a chance to petition the court to stay, but there are no formal appeals pending before immigration court. Community members have tried contacting Sen. Maria Cantwell’s office as well as the ombudsman for the Office of Citizenship & Immigration Services in the hope they will intervene.

“In this day and age where the Obama Administration is looking at prosecutorial discretion, we are hoping they will decide to issue (a new) Notice to Appear to allow Ms. Jimenez-Diaz, an otherwise law abiding long time resident of Washington State, active community member, mother of two United States citizen children, this opportunity to legally seek lawful residency,” said Edward.

Instead, ICE is seeking to deport her under the old order. ICE has already asked her to produce an itinerary for her return to Mexico, an indication the deportation is proceeding.When she goes, she will be barred from reentering the country for 10 years.

She will have to make an agonizing choice: Will she take her kids, who are Americans, or leave them with relatives to live here?

Guerrero, the Mexican state she left at age 19 seeking a new life in the United States, is now consumed with violence.

“It’s too hard to live there – too dangerous,” she said. “There’s too much killing.”

But the prospect of leaving her children behind frightens her even more: “I can’t even talk about it.”