The High Cost of Technicalities 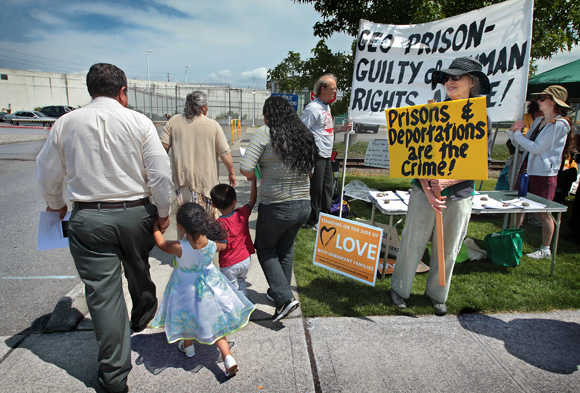 Children dressed up for a visit with family members detained in the Northwest Detention Center pass by immigration activists at a recent protest in front of the facility.
Dean J. Koepfler/The News Tribune

Young love, and a near-fatal car accident brought Ana Maria Gutierrez to the United States nearly half her life time ago.

Now she faces a collision of another kind – between immigration policies and her hopes for the future of her family, which includes six children, all American citizens.

Ana Maria, was only 15 when she first noticed the young man visiting at church in Tamastian, a tiny village in Jalisco, Mexico.

“He had really long eyelashes,” she said through a translator. She blushes. “I noticed that right away.”

The young man was Alvaro Gutierrez, a U.S. resident who had been visiting family in the village. Alvaro had been a lawful permanent resident of the United States since the age of four.

The two fell in love. A few years later, he proposed to her in the plaza of the same town. She was 19. They married in a civil ceremony, and 10 months later held a church wedding. After each, though, she stayed behind in Mexico while he returned to the United States.

In 1997, just after the civil wedding, she did make one attempt to unite with her husband. But her timing was bad. That was also the year provisions of the 1996 Illegal Immigration Act had gone into effect – new rules that included stepped up enforcement at the borders.

She got caught at the border and ordered deported. Prior to that, more relaxed security had allowed many immigrants to come and go across the border with fewer stops. Even those who were caught, were often turned back without an actual deportation order.

For Ana Maria, now 35, this one failed attempt would have repercussions years later. But she wasn’t thinking about that at the time.

“It’s hard being apart when you’re in love like that,” Ana Maria said. “It doesn’t feel good.”

And it was about to get worse. On his way back to Seattle after the church wedding, Gutierrez’ car struck a tree near Fontana, California. He wound up at Loma Linda University Medical Center for nearly three weeks.

“He was supposed to call, and he didn’t,” said Ana Maria. For days, she didn’t know where he was. Finally, family in the U.S. reached her. His body was so battered they kept him “in ice” she said. His kidneys were damaged.

That was more than Ana Maria could bear. “I felt desperate,” she said. So in 1998 she crossed into the United States without permission, setting in motion a chain of events that has caught up with her today.

She and her husband began their lives together in Monroe, where they started their own landscaping business and bought a mobile home on five acres of land. They now have six children, all born here, ranging in age from one year, to 13 years old.

In 2001, her husband, then a legal resident, made his first petition for his wife to remain here legally. That petition was approved, but then put on hold because of some legal technicalities.

Then in September, 2008, her husband became a citizen. Six months later, in May, 2009, he re-applied for legal permission for her to stay.

That was their mistake. The petition triggered a reinstatement of the old deportation order. Immigration officers put her under house arrest and clamped an ankle monitor on her.

“It made me feel like a criminal,” she says.

When her children asked her about the ankle cuff, she told them she had to wear it to be close to them.

“I told them, we all have to make sacrifices in life,” she said. Still, it was a source of shame. She hid it when she went out in the community, where she is active in her church and at her children’s school.

Ana Maria’s attorney, Elizabeth Hawkins, has petitioned for review of her case with the 9th Circuit Court of Appeals, hoping the old order will be thrown out, and she can have a fresh chance to tell immigration officials about her life today.

The appeal is still pending, but in mid-August, ICE officials said they would issue Ana Maria a new “Notice to Appear.” That’s good news. It means she will be able to stay in the country while she waits for a hearing to plead her case anew with the immigration court.

Had she not had the one deportation order in her background, she would be eligible for all kinds of relief, said Hawkins.

In the meantime, her life is in limbo. It could take a year or more for her first hearing. But she’s relieved, for now.

Ana Maria is hoping she won’t get sent back. Her remaining relatives in Mexico have kept her up to date with what’s going on in and near her town. Bandits and drug gangs recently killed a donkey to drive home a threatening message to the husband of one of her cousins, who is running for a local municipal office. They killed another candidate for the same office, she said. “It’s really ugly.”

In the U.S., her kids are safer. They are doing well in school. Her oldest just made honor roll. Her eyes shine with pride.

“I’m really worried, one for my kids education, and there is so much violence in Mexico,’” she said. “I really don’t want to take them there.”