Picture 12,000 dump-truck loads of dirt – enough to fill eight Olympic-sized swimming pools. This dirt contains some pollution — but no one is really sure how much.

Swept downstream each year into Seattle’s biggest toxic-waste site, the Duwamish River – this mountain of dirt looms large as the public gets a chance this week to weigh in on how to clean up the part of the river set to be rehabilitated under the U.S. Environmental Protection Agency’s Superfund program. 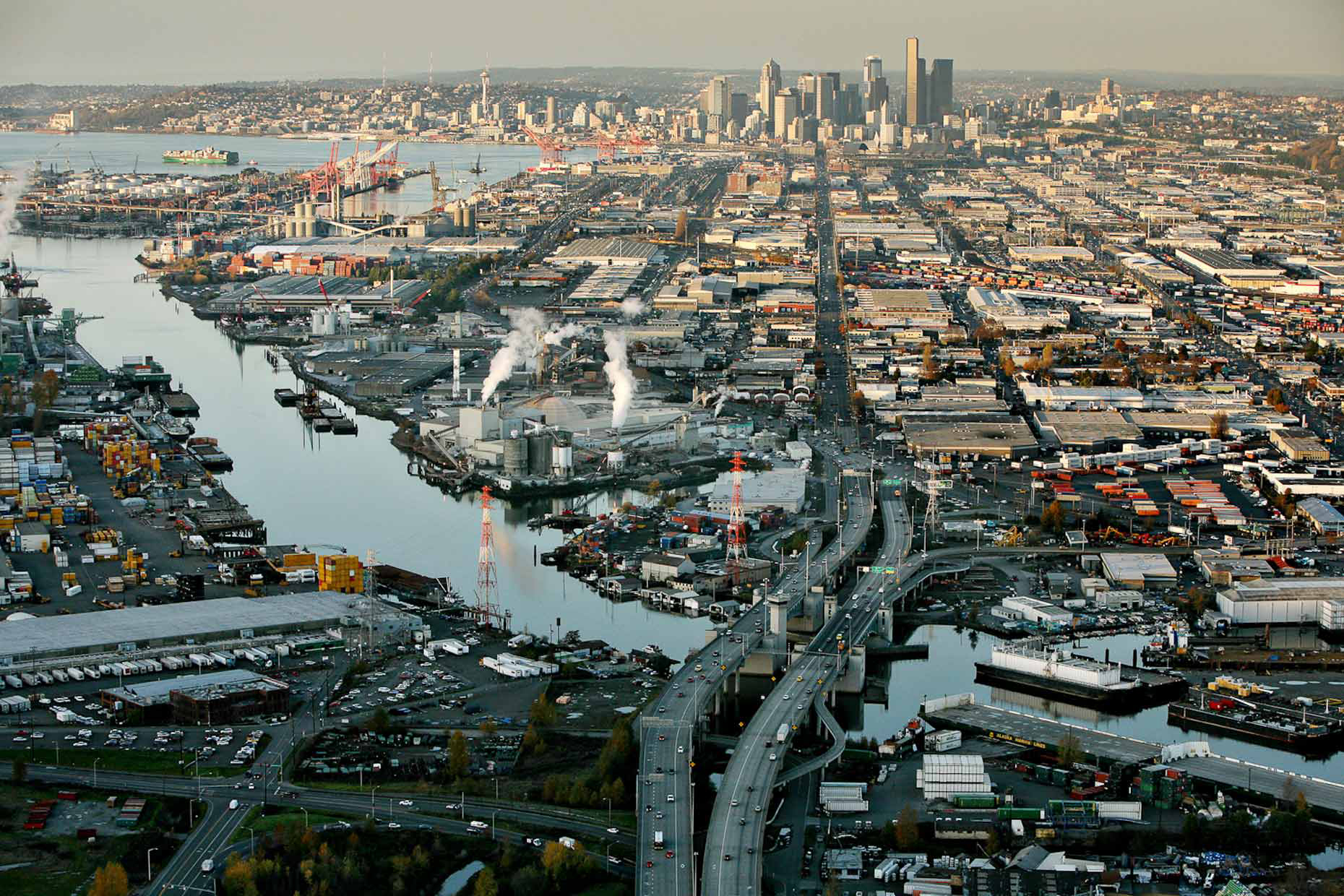 Seattle, King County, The Boeing Co. and the Port of Seattle – all major polluters of the Duwamish over the years – have laid out 11 plans that aim to clean up decades of accumulated toxic goop in the river. To scoop out some of the mess and bury at least some of the rest beneath clean sand, gravel and rock, the pricetags range from spending $230 million over 24 years to expending $1.3 billion over 43 years.

The most controversial issues are related: Does the river need to be so clean that people can eat seafood from it regularly? And if so, does that mean polluted rainwater runoff flowing off a massive area of south King County – and bringing with it at least some of those 12,000 truckloads of dirt – must be cleaned up at an even higher price?

All the plans on the table today would, eventually, make it safe for people to play on the banks of the Duwamish; for wild creatures to eat fish from it; and for clams and worms to live in the mud at the bottom without contamination. But none of the plans would make the river’s fish and crabs clean enough for people who live along its banks to eat on a regular basis. These people live in some of Seattle’s poorest neighborhoods.

“It’s the folks who are trying to put dinner on the table tonight who are most exposed and at risk,” said BJ Cummings, coordinator of the non-profit Duwamish River Cleanup Coalition. “It’s overwhelmingly low-income, tribal and immigrant and refugee fishing families.”

The local governments, Boeing and the state and federal officials say they’re aiming to get the Duwamish as clean as other local waterways such as Elliott Bay and Lake Washington – but nobody should be eating many fish out of those water bodies, either. The local governments and Boeing argue that the lower Duwamish River shouldn’t be held to a higher standard just because it was designated a Superfund site.

“We want to bring the risks down as low as we feasibly can,” said Dave Schuchardt, strategic advisor at Seattle Public Utilities. “There’s a feasible level of what you can get to.”

The five miles of the Duwamish at issue runs through the heart of Seattle’s largest concentration of industry. And many small and medium-sized businesses there, particularly those close to the water, wait anxiously to find out what the cleanup plan will mean for their bottom line, since many may be on the hook for past pollution.

In an unusual move, the EPA is asking the public for its opinion before the agency makes a tentative choice of a cleanup plan. This week, on Tuesday (Dec. 7) and Thursday (Dec. 9) nights, EPA and the state Ecology Department are holding meetings where members of the public can have their say about how much cleanup is needed and at what cost. It will be a little over a yearbefore the agencies tentatively pick a cleanup plan and again ask the public for its ideas.

Some of the Duwamish’s polluted dirt – or sediment, as it’s called under water — is thought to settle along the river’s final five miles above the West Seattle Bridge, the part of the river already classified as a Superfund site because it numbers among the nastiest pollution messes in the country. The rest is presumed to flow out to already-polluted Elliott Bay.

Where exactly the 12,000 truckloads of dirt – and the pollution it contains – is coming from each year is a bit of a mystery. The state Ecology Department tested the sediments in the bottom of the river for two miles upstream of the Superfund site and – with one exception – found them to be pretty darn clean, certainly no more polluted than river and bay bottoms elsewhere in cities around state.

However, when technicians tested the dirt actually floating in the river water, it proved to have considerably elevated pollution levels. Where is it coming from? That hasn’t yet been determined conclusively.

To Cummings, whose cleanup coalition of neighborhood groups, environmentalists and representatives of local businesses and the Duwamish Indian Tribe was designated by EPA to represent community interests in the cleanup process, the fact that the pollution is in the water suggests it’s flowing in from areas upstream through stormwater – the nasty mix washed off streets and other hard surfaces by the rain.

The cleanup coalition is calling for cleaning up the stormwater upriver of the Superfund site so that poor people and tribal members can eat Duwamish seafood regularly.  EPA officials say it’s unlikely people will be ever able to consume a lot of Duwamish seafood– even though that’s officially still their goal.

“We don’t see that in any urban area of Puget Sound,” said Allison Hiltner, the EPA’s point person on the cleanup. “That’s kind of the sad reality.”

The focus of the cleanup plans produced so far are four contaminants, all thought to promote cancer: PCBs, arsenic, dioxin and a class of chemicals known as polycyclic aromatic hydrocarbons, or PAHs. Under the federal EPA’s rules, those could be left in place at levels that would be expected to produce an extra case of cancer for every 10,000 residents exposed over a lifetime.

But state law has a higher standard. It says toxic waste sites must be cleaned up 10 times as much – so that only one person in 100,000 exposed over a lifetime would contract cancer.

The plans on the table now would meet the federal requirements – but not the state’s.  That’s because of those 12,000 truckloads of dirt coming down the river each year, said officials at the city and the port.

And that’s means the current cleanup alternatives don’t satisfy the law, says Cummings of the Cleanup Coalition.“Suggesting that we’re going to do something less here is offering the fishermen in the Duwamish less than the protection under Washington state law,” she said.

Currently officials advise residents against eating any Duwamish seafood except salmon, which live in the river only briefly. Local governments and Boeing envision eventually allowing consumption of some of the fish and crabs and other creatures in the river. They are promising that government would undertake significant efforts to warn residents about exactly how much is safe to eat. That could be problematic, though. Recent interviews by King County officials with people fishing along the river showed some mistakenly thought that cooking seafood would eliminate the pollution in it.

However, even under the 11 cleanup plans offered so far, the cancer risk to humans from eating Duwamish seafood is expected to be reduced by 90 percent, say Boeing and local, state and federal officials. Most people, who might eat Duwamish seafood once in a while – if at all – would be protected. But tribal members and others in the community, particularly immigrants from Asian and the Pacific Islands, already eat seafood from the river even though they’re not supposed to. If the river is “cleaned up,” would they eat more?

State and federal officials, while describing the problem and the likely solutions in terms much like those used by Boeing and the local governments, say they remain open to suggestions by the public.

“It’s very important for the city of Seattle to weigh in on how we’re going to clean up the Duwamish,” said Hiltner of EPA.

But state and federal officials clearly are leery of the idea that the Superfund cleanup should be expanded from the 32-square-mile area that drains into the Superfund-targeted portion of the river to the 460-square-mile Green River Valley that drains into the Duwamish from areas as far away as Pierce County. State officials still are working to catalogue and clean up more than 170 known or suspected contaminated sites in South Park, Georgetown and other areas in the 32-square-mile immediately surrounding the Superfund site. That task alone is going to take years – and the pace of the cleanup probably isn’t going to be helped by the current budget situation in Olympia.

“Right now we don’t have plans to go upriver,” said Brad Helland, a state Ecology Department official who oversees the cleanup. “Basically it’s a workload issue. We are prioritizing things and we have got to get (pollution) control done in the Duwamish area.”

Adds his colleague, Dan Cargill: “We’re finding (pollution) sites out there that we never knew existed.”

The local governments and Boeing also aren’t encouraging an expansion of the cleanup they’ve worked on for years. Stephanie Jones-Stebbins, head of environmental affairs at the port, said: “We all think it’s important to keep working on that (Green River), but should we delay this cleanup to achieve perfection that may take decades?”

Hiltner, of the EPA, even raised the specter of having to completely depopulate the Green River Valley in order to allow unlimited fishing in the lower Duwamish.

On the other hand, Cummings of the Cleanup Coalition knows that once EPA makes a final decision on a cleanup plan in 2013, the die will be cast probably for decades to come. She argues that simply making cities upstream do the same things Seattle will be doing to clean up stormwater runoff makes a lot of sense. In Seattle, for example, the old Rainier brewery was overhauled to get rid of PCB contamination. At Boeing Field, when the source of PCBs couldn’t be rooted out entirely, Boeing agreed to build a plant to treat polluted stormwater runoff. The same could just as easily be done in Tukwila or Kent or Auburn, Cummings said.

“What we want to avoid is finding out too late that we didn’t do enough,” she said.

The U.S. Environmental Protection Agency and state Ecology Department are inviting the public to two meetings to learn about the cleanup plans so far:

Format: Short presentations by EPA and Ecology, followed by break-out groups that will to tabletop exercises using Leggos to talk about cleanup methods.

Format: Open house.  EPA and Ecology will make short presentations at 4:30 and 6:30, to be followed by a panel of representatives of the city of Seattle, King County, the Port of Seattle, The Boeing Co. and the Duwamish River Cleanup Coalition. The panel will be available to answer questions.