By Rita HibbardMarch 5, 2010No Comments

Students in Seattle, Bellingham, Olympia, Portland, Berkeley and in college towns across the nation Thursday raised voices and waved protest signs against rising tuition and fees that threaten access to higher education.

It was called a "National Day of Action." It was bigger on some campuses, where hundreds turned out, and smaller on others, like Bellingham, where only about 20 students turned out. Nationally, tens of thousands of students protested. 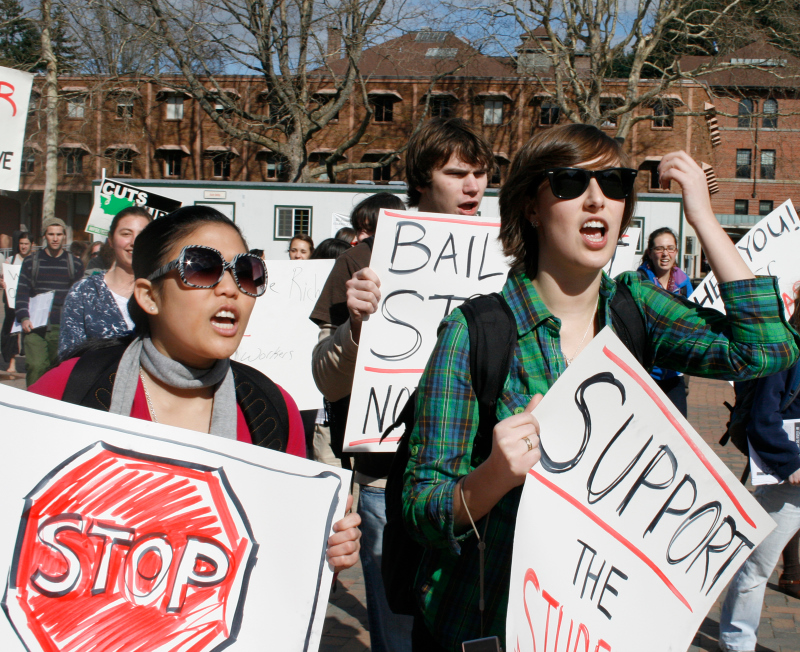 At Portland State University, about 200 students came out to protest. At the University of Washington, where students paid a 14 percent tuition increase last year and face another 14 percent hike this year, hundreds turned out.

In Bellingham, Western Washington University student Tessa Marcovitch is graduating in June, but said she joined the protest because she "wants the next generation to have a chance to get an education."

John Morgan, 20, joined the Bellingham protest to add his voice to those in opposition to budget cuts to financial aid. Students at all public colleges and universities in Washington face potentially stiff tuition increases next year, with looming and as yet unfilled budget deficits.

“How are we going to save the future if we can’t even get into our classes?”  Reid E. Milburn, the president of the Student Senate for California Community Colleges, referring to tuition increases and reductions in the number of courses, told the Times. Her comments drew a large cheer from those in the crowd, many them students avoiding classes in a show of protest.

At Western Washington University in Bellingham, only a handful of students turned out for the protest. Students who did show up were vocal, but several said they missed the support of those not present.

Photographer Samantha O'Brochta submitted this photograph that captured those missing in action. Thanks also to reporting contributions from WWU student Lillian Furlong in the field.