Despite the differences in their homelands, both made their way here to deliver a message to a United Nations conference on climate change:

Your plans to save the Earth could kill our people.

Specifically, they fear for indigenous people who depend on natural forests and grasslands.

A United Nations proposal being negotiated here this week to govern cutting of forests – which accounts for an estimated one-fifth of the human-caused global warming – fails to distinguish between natural and manufactured forests. It’s an omission that would enable timber corporations to log virtually any intact forest on the planet, replacing it with immense swaths of industrial farmland containing only one type of tree, critics charge. 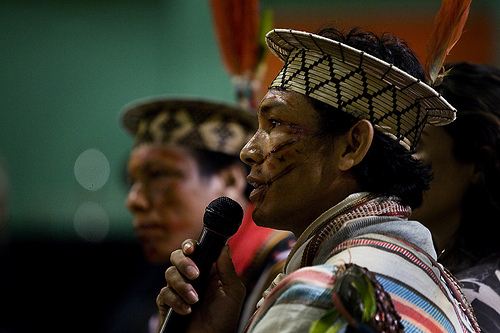 An indigenous Brazilian man addresses a forum on deforestation and native peoples at the UN climate summit in Copenhagen that ends Friday. InvestigateWest photo by Mark Malijan.

Although the world is likely to hear on Friday that an agreement on slowing deforestation is one of the few bright spots to emerge from two weeks of UN talks on a climate treaty here, indigenous activists see the agreement as anything but a success.

The deal emerging would require rich countries that continue to emit plant-warming gases to compensate poor nations for slowing their rates of deforestation. Proponents tout it as a bargain-basement way to reduce the greenhouse effect in the near term. The United States agreed to kick in $1 billion of a $3.5 billion fund being put together by developed nations for the pact.

Environmentalists, though, note that it’s going to take a whole lot more cash to actually make a difference.

“This $1 billion pledge from the United States should be an appetizer and the U.S. should also serve up the main course for further mitigation and adaptation funding,” The Nature Conservancy’s Andrew Deutz said in a prepared statement. “The Nature Conservancy hopes this announcement generates further momentum on financing and targets.”

The UN, for its part, at least pays lip service to keeping the role of indigenous peoples in mind as the deal goes forward. But provisions to make those protections legally binding were shot down. 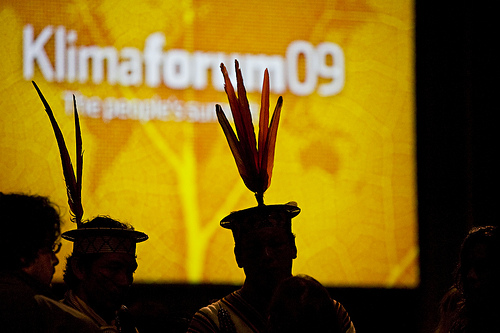 The headdress of a native Brazilian is outlined against the screen at the front of the room of the forum on deforestation and native peoples. Deforestation accounts for one-fifth of mankind’s contribution to global warming. InvestigateWest photo by Mark Malijan.

“We have to find a way that you can take into account the carbon value and at the same time ensure that all of the other functions of the forest, whether ecological functions or social functions or employment-related issues, they are all taken into account,” said Janos Pasztor, a high-ranking UN official on climate change. “We just need to get this machinery going so that we don’t miss out, because if we wait too long, then the forests will not be there anymore.”

Both Canada’s Thomas-Muller and Uruguay’s Filippini worry about the role corporations will play under the UN deal in buying and selling the rights to emit gasses that warm the atmosphere.

They’re concerned about a continuation of a pattern already exemplified by the Weyerhaeuser Co., perhaps the most iconic of Pacific Northwest timber companies, which is cutting in Canada and planting in Uruguay.

In Canada, that means chopping down forests that native people have relied on since time immemorial – leaving room to develop the incredibly greenhouse-gas-intensive Alberta tar sands to produce oil, which will further warm the globe.

In Uruguay, it’s the plans the United Nations is working on that are worrisome to Filippini. They would award credits in the so-called “cap and trade” system to companies like Weyerhaeuser that come to places like Uruguay and create forests where there were none. There’s just one problem: This changes the fertile, windblown pampas plains into an ecosystem of no use to the native people.

The UN plans, known as REDD, for Reducing Emissions from Deforestation and Forest Degradation, would allow countries like Canada to keep chopping away at forests,  running factories full-blast and driving big SUVs so long as they support renewable energy or forestations projects like those Weyerhaeuser is pursuing in Uruguay. Under the deal, that would “offset” their emissions of the most prolific of the greenhouse gases, carbon dioxide, by paying poor countries to leave trees standing.

In Uruguay, eucalyptus and pine plantations have sprung up on about 1.2 million acres over the last thirty years, an area roughly the size of Delaware. Most of the land was not previously forested. 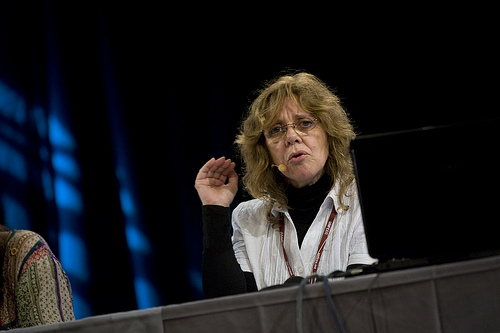 Ana Filippini, Uruguayan activist on behalf of indigenous peoples, speaks of the negative effects of tree plantations containing just one species of tree. Those could be planted by companies looking to get credit for helping fight climate change. InvestigateWest photo by Mark Malijan.

Where grasslands are converted into forests, indigenous people lose the means to support themselves, she said. The land no longer supports wildlife, and in many places, intensive cultivation results in infertile soil, forcing people to abandon their homes and move to cities, where they become dependent on market economies, Filippini explained. Those, of course, are more greenhouse-gas-intensive than living in the pampas.

This business about how much credit companies garner for planting tree plantations is one of the few areas governed by the rancorous Copenhagen climate talks where negotiators seem likely to produce substantive developments. And yet, critics say, shaking hands on a deal like this would fly in the face of an article adopted by the UN in 2007 that enshrined indigenous peoples’ rights:

“The needs of local and indigenous communities should be addressed when action is taken to reduce emissions from deforestation and forest degradation in developing countries.”

Said REDD critic Marcial Arias, an indigenous Panamanian who was forced into a city because the plantations installed by European corporations destroyed the land he called home:

“Plantations are not forests. They do not give life, they take it away from you.  … How can we (indigenous peoples) be in favor of this?”

Camila Moreno, a lawyer who specializes in indigenous land rights and is a member of Friends of the Earth Brazil, made it clear that not all South Americans are opposed to REDD measures. 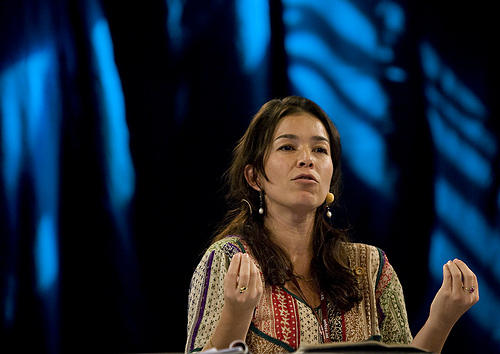 As if the acquisitiveness of foreign powers weren’t problematic enough, Brazilian opponents to monoculture plantations also have their own governmental leaders with which to contend. Moreno said that Blairo Maggi, the Brazilian Governor of Mato Grosso and the largest soybean producer in the world, is one of REDD’s most visible proponents.

Moreno described the program as “a cheap way for polluting countries to avoid making carbon reductions on their own territory…  This is a new form of colonialism.”

The emerging agreement to pay the poor nations not to cut down their trees will do nothing to protect the vast stores of carbon being liberated in Canada, says Thomas-Muller, who is with the Indigenous Environmental Network of North America.

Interviewed as his group led a massive protest march earlier this week, Thomas-Muller explained that logging in Canada’s boreal forest makes it the second-fastest-disappearing forest in the world, after the Amazon. The boreal is Canada’s largest intact stand of forest, 2.3 million acres stretching from the Atlantic to the Pacific — larger even than what remains of the Amazonian rainforest.

And in some places where the boreal forest is cut down, it’s to allow extraction of the Alberta tar sands, a vast reserve of potential oil whose development by some calculations is five times as greenhouse-gas-intensive as standard crude oil drilled in, say, Saudi Arabia.

“This is the number one reason why the Canadian government has emerged as the Darth Vader of the negotiations here in Copenhagen,” Thomas-Muller charged. He points to the profitability of Canada’s tar sands as the reason North American governments are unwilling to sign a United Nations injunction declaring the rights of indigenous people to have a say in the country’s management of forest resources.

The Pacific Northwest could well play a role in opening up the tar sands for widespread use. A pipeline to be built across western Canada to load tar sands onto oceangoing vessels is planned, raising the possibility of a major oil spill in Canadian or American waters. And Thomas-Muller said one pipeline already is capable of pumping oil from British Columbia to Washington refineries.

“This proposal is nothing more than a land grab,” Thomas-Muller said. “It is a privatization scheme designed to expropriate forested lands from the indigenous peoples in the global south, to turn those into international commodities to be bought and sold on the international carbon market.”

As he helped lead the protest march, Thomas-Muller took a step back from the back-and-forth of negotiations here and observed: